Allowing the user to Not set a password - would be far more rational, because a customer with no-one else in the building would not have to enter a password to clear the screensaver every time - LIKE EVERY COMPUTER IN THE WORLD!

I doubt that as many as one percent of your customers ever has an issue with someone stopping a print. Why make this a PIA for everyone else?

EldRick wrote:Allowing the user to Not set a password - would be far more rational, because a customer with no-one else in the building would not have to enter a password to clear the screensaver every time - LIKE EVERY COMPUTER IN THE WORLD!

I doubt that as many as one percent of your customers ever has an issue with someone stopping a print. Why make this a PIA for everyone else?

Have to agree. Already tired of inputting my four digit code. Only had the screensaver on for a day.

One can use a single letter for a password. "p" for instance.
One cannot Not-enter a password and use the screen saver. That's just stupid, and it would only require changing one line of code to permit it.

It's NOT a screen lock if there is no password. Asking for screen lock not to have a password- that's a whole new level.

Let's recap where this went wrong.
#1 screen burn in is a defective screen NOT a normal failure. Screen saver is not going to change or affect the screens that did or are failing. They will fail or they won't fail- no matter what you do. So again, the first debunk here is- LCDs are not CRTs and the failures are not lack of a screen saver. I know first hand, I had 2 of my screens fail and they were complete and total polarizer failure- the layers of the screen NOT related to burn in. ANY image showed the entire screen to wash out. I'm not saying it's impossible to have image persistence on an LCD- that can happen, but that is not the failure that this entire discussion is talking about. Power cycling and other methods generally clear LCD image persistence. Again, static images are not "killing" the screen. What is killing screens is a manufacturing defect.

#2 It's a screen lock, not a screen saver. In order to lock it needs a password.

Again, if your screen is failing- it's a defective part. If your screen is not failing, it's not likely fail, screen saver or not. The fix is, replace your screen if it's defective, ignore this entire thread if not. If Raise 3D won't cover it under warranty I found the exact same screens 3rd party. https://www.amazon.com/1024x600-LVDS-Ca ... B01A2U47CY

In order to Not lock, but display the screen saver, one should be able to simply confirm nothing in the password field, instead of forcing an entry. You know, like all those Windows and Macintosh computers and their screen savers that don't do any good either...

Then perhaps rename the function, which seems to be your point. Perhaps to "Screen Saver"? People Like "screen savers" - implement flying pigs, and you'll get cheers.

Bottom line is - let the customer decide - don't assume you know what we want or restrict use of a function for no good reason.

The name of the current function is enable screen lock.
If it is necessary, we can add screen saver function in future versions.

Yes, by now there may be even no more than 1% customers have met stopping printing by mistake cases.
But we do have a lot customers and agents asked for this function to provide more safer and we admit such kind of risk for corporation customers. 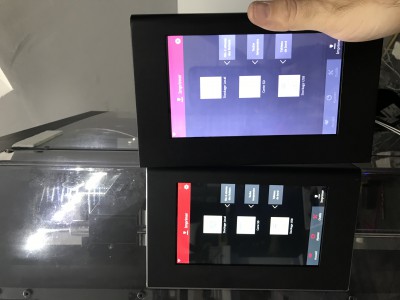 sylus wrote:After discussion resseller have change the lcd you won’t take into account
Here the illustration of issue

Wow, the display on the right looks as bad as the display in my N2, your new display on the left looks like an IPS (In-plane switching) LCD Display, has Raise3D upgraded their displays????? If so, can I buy the better display, mine is horrible unless you're looking straight on.....

you write 'Screen saver has already been added in version 0.9.0 touchscreen firmware.' i don't see it anywhere.

Sorry for typo, the function in our screen is called Screen Lock.
Post Reply
51 posts