Raise3D is always listening. If you have a feature requested related to our product, or if you have new ideas that need attention from the community, please post here.
Post Reply
11 posts • Page 1 of 1

First it would be nice to have the option to disable the automatic generation temperature control gcode. I like to use custom gcode to start heating the bed and home at the same time. Then I will place the nozzle at 0.1mm layer height to prevent oozing when heating the nozzle. I have no problem doing this with simplify3d or slic3r but I prefer to use IdeaMaker for the N2.

Third make an option to generate a wipe tower with low infill and have it guarantee a wipe the unused nozzle before resuming the print. This could be used with the second option I stated above to prevent oozing on the print and save filament by not needing a wipe wall or dense prime pillar.

1. We will consider to add an option for you, about not using the default start. If you want to disable it, don't forget adding your own preheating inside the Start code. ( But M221, flowrate control will still be force added.)

I am in a dilemma with temperature control while changing nozzles. Is there a way I can cool down the nozzle that just finished while heating up the nozzle that is about to start simultaneously in the designated corner?

Is there a way I can ask the printer to cool down the inactive extruder while heating up the extruder that is about to become active?

You can enable inactive nozzle cool down and have nozzles move to a corner you define during the heating and cooling process. 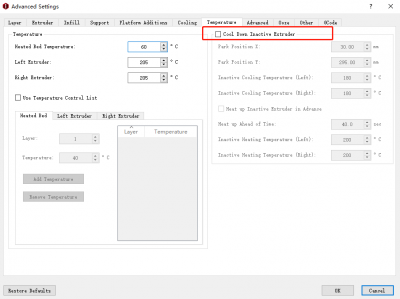 Thank you for the reply, however, the cool down is "during" printing, I would like to know if it is possible to cool down the nozzle while the other one is heating up, a simultaneous operation being done in the corner specified.

Currently, the extruder head will go to the corner and heat up the nozzle that is about to take its turn...then that nozzle will go back to the part and take its turn...only now will the inactive nozzle start cooling down...I would like this nozzle (inactive) to cool down while the other nozzle was heating up.

To heat the other nozzle first is for the nozzle switch. As one nozzle will be lift up and the other will drop down. If no heat provided to soften the filament inside, movement of the nozzles may do hard to the printer.

Vicky, keeping nozzle hot while waiting for the other to heat up makes that whole procedure useless. It is very important to cool down the nozzle ASAP when it goes inactive. Otherwise it keeps oozing when the other one is heating up. The snoot is forming, and it will be dragged to the model over the wipe wall because inactive nozzle is raised. The whole idea of cooling down inactive nozzle is for preventing oozing. In current state of IdeaMaker it just doesn't work and that's why Pro2 is incapable of long dual material printing with filaments prone to oozing.
If you worry about softened filament in the moment of extruder switch, just limit cooling down for this moment to 180°C.
And if switching extruder when one of the nozzles is cool is so dangerous to the extruder, then why it just switches during filament load regardless of other nozzle temp?

We have 180C limit for manual nozzle switching coded in firmware now. So someone in Raise3D decided that 180C is safe anyway.
But I have suggestion for something that, maybe, would overcome all these extruder switching problems.

Is it possible to move extruder gears simultaneously with nozzle switching motor? It should be hardcoded in the firmware, I don't think it would be possible to achieve that using gcodes.

If the printers controller could move filament using extruders motors exactly when switching, then all that hassle with keeping nozzles hot would not be needed.
Just move extruder gears (so the filament also) for the equivalent of raising/lowering the nozzles. It doesn't have to be very precise (which I believe would not be possible). It would keep the filament almost still in the hot-end. Don't change the extruder step-motor counter during that, so it would be transparent to any slicer.
There would be no pumping effect when extruder switching during the dual extrusion.
Inactive nozzle could be left cool for switch.
No temperature limits would be required for manual nozzle switching, when calibrating right nozzle position over the heatbed for example.
I don't know if there is any limitation in the controller hardware for that feature. I just believe that making this would help in many ways.

Hello, I am currently trying to make custom G code for a dual extruder (chimera style) printer on Ideamaker. I am trying to add a nozzle wipe on the edge of the bed after every extruder change. My issue comes with the fact that custom gcode can only be added before the extruder change. I need the wipe to take place after.
Post Reply
11 posts • Page 1 of 1