A colleague showed me the flexible, powder-coated PEI, spring steel build plate from his Prusa printer.

I love PEI as a build surface, but have been looking for a way to get rid of the double-sided adhesive for quite some time. The bed on my N2 and N2+ printers has been modified with 4-point adjustment, and I also shifted it forward about 10mm to move the clips out of the build area. This also involved moving the Y-axis endstop switch by about 10mm.

The flexible PEI beds are readily available on eBay, Amazon, and elsewhere, but the magnetic bed options still involve double-sided adhesive. I didn't want to go there because over time the stuff dries out, plus it isn't a solid bond so it can expand or creep while hot. So I picked up a couple 12x12x1/4" pieces of MIC 6 aluminum and made by own magnetic bed. 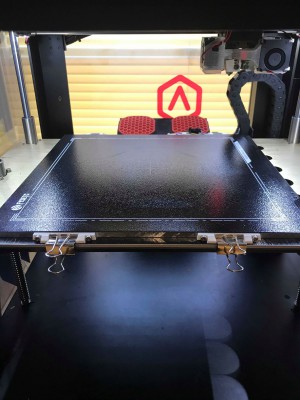 The magnets I'm using a 1/2" diameter and 1/8" thick. Initially I bought neodymium magnets. After building the first two plates with those I learned that most neodymium magnets start to deteriorate above 85C. I print a lot of ABS and Polycarbonate and run my bed as hot as 110C. After a while I could tell the magnets were losing their pull.

If all you print is PLA, then the neodymium would be fine. For my work, however, I decided to replace the magnets with samarium cobalt which will survive very high temperatures. To pot the magnets in the plate I first drilled the pattern I wanted with a 1/8" diameter drill through the plate. I then used a 13mm drill to drill the pockets just deep enough to get the magnets below the surface.

I have some stuff laying around that most folks won't have - like a precision machined cast-iron table and a few pieces of 3/4" MIC 6. As such, I won't detail the build process unless someone is really interested. But to make a long story short, I potted the magnets into the pockets with JB Weld epoxy and the face of the magnet is flush with the surface of the aluminum plate.

Been printing like this for several months now and really like the setup If there is interest, I can share more of the details. The black flex plate shown is currently my favorite. I bought some gold-colored ones initially but the coating started to peel off. These black ones are holding up better. I printed a PLA part recently and needed to use glue stick on it, but for PETG and ABS I've had great luck. I haven't tried PC yet as I just replace the magnets with SMCO which will survive the heat.

This is the one I got first - I bought two. One is scrap, and the other has significant holes in the coating.
https://www.amazon.com/gp/product/B07XYZRGZM

I like the 310mm plates because they hang off the edge of the aluminum base plate a little and are a lot easier to lift from the magnets than a 300mm plate.

I just received some from AliExpress that are smooth on one side and textured on the other. Just got them and have only printed a couple parts on them, so the jury is still out on those.

It isn't perfect, as I had a large 3KG PETG build a while back. It lifted enough that it pulled up the corners of the magnetic plate so the part was no longer stable. I ended up using the old glued PEI sheet for that. 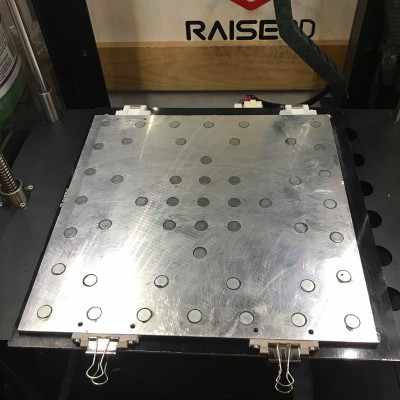 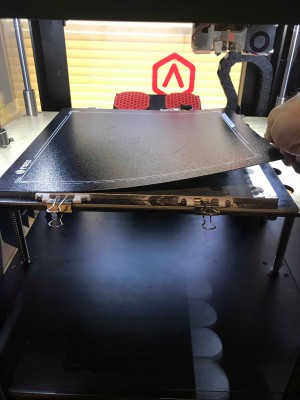 Thanks for the write up, did you put the tooling plate directly onto the existing bed?
CAD-NX Printer-Raise3D N2

Yes, my printed tabs are .5mm up from the bottom of the plate, so the spring clips pull the aluminum down to contact the hot-plate.
Post Reply
3 posts • Page 1 of 1