I'm looking to update the Motion Controller Firmware on my N2 Plus from 1.1.6-rev1 to 1.1.9 latest, just a few questions before I go through configuring..

1. https://github.com/Raise3D/Marlin-Raise3D-N-Series <-- Is this firmware configured for any N series in particular? If so, is there a place to find the current latest for the N2 Plus please?

2. Are all of the firmware changes for the N2 Plus located in the configuration.h / configuration_adv.h? Or are there any additional files I need to copy across for it to work?

3. Finally, will there be any communication issues between the touch screen and motion control board after updating? 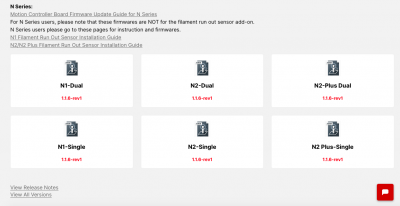 Point being, according to the official download page, the current version has not changed.
All official sourced raise3d versions communicate with the Raisetouch, there are no major changes in gcode protocol ever during the life of the N series.
Last edited by Jetguy on Thu May 21, 2020 1:28 pm, edited 1 time in total.

Pray tell, you aren't about to try and merge raise3D custom version into mainstream Open Source Marlin version???
If you just want to cause problems- yeah, do that.

Just being honest with you, you either are a firmware expert or are not.
If not a veteran expert, then first off, compiling from source is not recommended and second, merging sources- good luck.
I'm being serious, there are specific changes throughout the raise version for specific raise communications. Slapping bog standard open source non raise firmware is not in any way recommended and likely, will not work. No, you can't just copy a couple of files over. First, you've have to get that mess to compile and the will be the first hurdle, let alone actually making a working firmware.

There is no good reason I can come up with for you doing this merge and "upgrade".
State why you think there is something to gain or some feature you are trying to add, other than just wanting what you deem is the latest version because you saw it somewhere on the internet.

I'm just trying to prevent a disaster. I see the trains about to wreck. Even experienced people struggled trying to merge or migrate in the past, and unless adding something like BLtouch which has already been done, no good need to rehash and do this again.
Last edited by Jetguy on Thu May 21, 2020 1:28 pm, edited 1 time in total.

Here is user ABH who did a custom and PROVEN working version and provided Binaries. This is unofficial firmware.
Great thanks for him creating this, however, again, this is user supported firmware, and as much as I think this is great, unless you are going to actually use the features and tune them, they are not for everyone.
Again, no need for someone to compile from source unless they have some major modification and know what they are doing.
https://forum.raise3d.com/viewtopic.php ... =80#p35108

The following pre-compiled files are available:

The following feature is removed in the precompiled files:
REPRAP_DISCOUNT_FULL_GRAPHIC_SMART_CONTROLLER
Edit 13-Aug-2018: Now re-enabled in all compiled binaries.

JUNCTION_DEVIATION replaces the use of traditional jerk settings.
A fixed "junction deviation" of 0.02 mm is used.

I don't have much experience with the new features, just tested that the firmware runs on my N1 and gives nice prints.

The point I'm trying to get you at is:
#1 by your question, it appears you were going to copy over a few files from the raise repository into a marlin 1.19 source, and I'm warning you of the impending disaster that would be to sort out.
#2 No, there are changes throughout and so complicated, it's not something just put in an answer in a forum post.
#3 Yes, if you put a non raise sourced firmware on this printer, probably is going to break communications with raise touch.
The specific answer as I remember it is that Raisetouch is expecting a few key replies back, upon bootup and continuous temp reporting format.
In general, yes, it's all bog standard gcode from a printing and normal command perspective, but again, at bootup, it looks for certain things and in operation, the temperature reporting format was specific.
The last release official is 1.16 by raise3d, and being honest, unless you really do something like adding a BLtouch or other probe, most users have no reason to go any further. You are mostly limited by the hardware, firmware is not going to improve the printer for the average user. Even me, even when I did a remapping of the gcode controlled fan for a Berd air, I kept using raise official source 1.16. Also, I used the reprapdiscount LCD modification and I'm pretty sure that had to be disabled in the ABH version due to final size of the firmware with it enabled was too large. *** Edit, I see the release note that last year he enabled the GLCD back into the binaries.

Also based on the notes and features, remember that things are a point in time from a discussion standpoint. What I'm saying is, Raise added a bunch of tuning options to the raisetouch application under hardware. Those do nothing more than send standard marlin commands. Since EEPROM is not enabled in standard raise supplied firmware, then the raisetouch application sends those commands shortly after boot to change the active memory state of the running Marlin firmware from the defaults in the firmware. So since in 1.19 by ABH has junction deviation, i don't 100% know and have tested that all current functions work as expected. In other words, say in tune, you set a new value, does that actually change the expected running values in firmware? Also, things like auto bed leveling scripts and some other stuff like that don't exist in raisetouch. The workaround is to just make a custom gcode print file that contains them, send that to the printer so it's stored, and then "print" that file when required.

First off, thank you so much for your comprehensive reply Jetguy. I really really appreciate it.

I was indeed originally looking to compile my own version to enable the BL Touch on the printer. My issue is that - due to not knowing what version ABH had listed in the marlin folder located here: https://github.com/ABH10/Marlin-for-Rai ... .x_Raise3D I'm not entirely sure what to edit to create a version for the N2 Plus, so I decided to throw up a post asking a few questions as I wasn't entirely sure where to start if i'm honest! I do have a fairly decent understanding behind the firmware, but going by what you're saying, it's definitely not worth the hassle to try to merge / create my own version.

I did manage to stumble onto ABH's branch for the BL Touch (https://github.com/ABH10/Marlin-for-Rai ... 3D_BLTouch), however the same issue as before - i'm still not entirely sure what the differences are between the different versions so I can enable it / compile it as there doesn't seem to be the same sorta thing as on the main branch with the ".firm" files.

If possible, I would like to stick with the main branch as it does appear to have a few more features i'd like to try out, but at the end of the day, all i'm essentially looking to do is find a version for the N2 Plus that enables the BL Touch, or gives a clear way to enable the it.

Once again, thank you so much for your comprehensive reply.