Hi All,
I recently updated my N2 Plus to the bondtech extruders and also updated all the firmware etc. So as at 12/08/18 I am running the current settings. But ever since changing, every time I pause, change filament and resume prints the layer shifts on the y axis. Never had a problem on the old stock firmware or extruders. Any suggestions would be appreciated.
cheers
Kerry

Can you recreate the same issue pause and resume without changing filament?

Hi Vicky, yes I don't actually have to change the filament, any pause and resume creates the same issue. Everything is lubricated and it doesn't have any thing clashing with the head. cheers Kerry

Just to make sure since you did not explicitly state what you updated- you know the system is 2 control boards and totally separate firmware versions right? Raise touch is the front LCD control panel and the Raise touch application that gives you the user interface and sends the gcode commands to the second control board running Marlin motion control firmware.
Current versions of each are
0.9.11 for Raisetouch
1.1.16 Rev1 for Marlin motion control.

I say this, because please, it's imperative you understand the dual control board situation and limitations it brings to the table when talking about pause and change filament. It's been published by me hundreds of times, Marlin motion control firmware 1.1.1 that shipped on nearly every N series- especially ones that sat in a warehouse for any length of time before you bought it has 1.1.1 firmware.

As to understanding why that is so important, there is no such thing as pause. This should set off alarm bells in your head. When you select pause from the LCD, or you implement a pause a layer height gcode, or say filament detection kicks in an pauses, well to the motion control board, that is not a separate pause command. The front panel is streaming gcode and the mainboard that actually controls the hardware of the printer just sees no more movement commands during a pause. This problem was that Marlin firmware 1.1.1 (again, shipped on nearly every printer because they were manufactured when that's all Raise3D had released) has a stepper timeout built into the firmware. So when you stop sending gcode commands (AKA what you call pause) Marlin is oblivious and just sees you stopped sending commands. This invoked the stepper timeout in 1.1.1 so then when you went to resume and the steppers enabled and tried to go the first move- there is a highly likely chance position was lost. This is a key fix in Marlin firmware 1.1.16 rev1- but it's not like Raise 3D tells or warns users to update. Now, to address a statement about filament detection- well that requires a special FRS (Filament Runout Sensor) version of 1.1.16 firmware, so reality is, you shouldn't be getting a shift in that firmware related to the 1.1.1 problem.

Again, explanation- you stated that before you updated you didn't have skips. The stepper timeout is 60 seconds, meaning if you instantly used the load and unload and commanded the feeder motor to move- that's a move within the time period. If you failed to update from 1.1.1 firmware, and just so happened to take longer than 60 second for any move while in pause (example, sitting at the preheat screen of the load and unload function before hitting the second screen load or unload icons- you are not telling any motor to move- just sitting there) and in that case, 1.1.1 firmware will time out.

I'm not saying this is your problem, just making sure you and all N series users are aware of how the system works, limitations, and why everyone should update the marlin motion control firmware to prevent the known stepper timeout in firmware version 1.1.1

Hi Jetguy,
Thanks for the great response. I had actually seen your responses on other layer shift issues and understand the issue with the 1.1.1 firmware etc. Just to confirm yes all firmware is up to date i.e 0.9.11 for Raisetouch and 1.1.16 Rev1 for Marlin motion control.
The layer shift I am experiencing occurs even if there is less than 60 seconds of inactivity. I can initiate a pause command, have the head move to the front right wait for 30 seconds and resume and have the layer shift occur.

May I ask any picture which can show how big the shifting will happen?
And serial log after shift happens.

Hi Vicky, Ok I will get you a picture and also a serial log - might need instructions on getting the serial log. The printer is not connected to a computer. cheers Kerry

Attach an USB driver onto your screen. After the shifts happens, go to the little gear button at top corner, More Settings -> Serial Port Log and Export.
Then you will get the log in your driver.
Thank you! 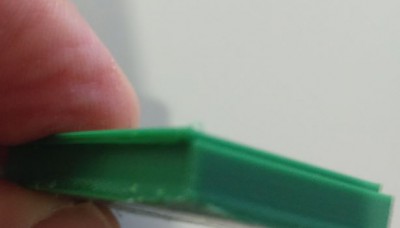 Seems not much information inside the log.
Does the shifting issue happen once after you upgrade the firmware? Did you remember which version you use on your printer before? If you'd like to help test whether
And whether shifting happens on different models or only specific models?

Hi Vicky, issue only started after updating the frimware, previous version was 1.1.1 , i never bothered updating the firmware as it was printing fine. Issue happens on all models (tried probably 10 so far) and all slicers tried so far.

Have you ever tried with rolling back to version 1.1.1 to see whether the issue is still there or not?

Hi Vicky no I haven't tried going back, do you recommend doing that. One thing that I have noticed and not sure it it has any bearing is that the head when parked at the home position is not easy to move from that position, certainly puts up more resistance than it used to do. It homes fine and doesn't cause motors to skip that I have seen when homing. cheers Kerry

If you can feel any resistance during moving the extruder around, I would like to recommend try with lube. If lube does not help you issue, then you may need reach to technician to ask about how to align the rods

Thanks Vicky, Lubrication is definitely not the issue. Not sure why the rods would go out of alignment with a change out of the head. Does that mean raise a support ticket? cheers Kerry

Yes, please. You can go and ask for more support help at https://help.raise3d.com/helpdesk.

I am having the same exact problem on the same model (N2 Plus).
Exactly the same in every detail.

Has a solution been found?

Have you tried enabling Z Hop? It will drop the build plate after retraction after done prime so that nozzle won't collipe with the already printed model.

There is no collision.
There is a layer shift after pause.
Just to confirm yes all firmware is up to date.
I recently updated my N2 Plus to the BondTech extruders and also updated all the firmware etc. So as of 11/19/19 I am running the current settings. But ever since changing, every time I pause, change filament and resume prints the layer shifts on the y axis. Never had a problem on the old stock firmware or extruders.
I don't actually have to change the filament, any pause and resume creates the same issue. Everything is lubricated and it doesn't have any thing clashing with the head.
Any suggestions would be appreciated.
I will send a picture as well.

Would you like export your log file and share with us after shift happens?
And try roll back to other versions and see whether the issue still exists or not.
https://www.raise3d.com/download/raiset ... -versions/
Post Reply
20 posts • Page 1 of 1