How can this be? Has anyone had experience of that much shrinkage? What did you do about it?

Summary: Inside hole is drawn to exact dimension but print results in a smaller dimension.
"How can this be?"
Yes, inside holes ALWAYS are smaller than drawn in CAD. Not the fault the printer or the material. This is due to limitations of the STL file export and import process, what the STL represents, the fact that a curve is NOT a curve in the STL, it's a multi sided polygon. Thus the inside lines making up the curve of the inside hole fall well inside this exact bore size.

What did you do about it?
Took the time to understand the why and learned to properly oversize holes in CAD as compensation. You can also attempt hole compensation on the slicing side as a setting, but given this is a keyed bore, I have concerns that the slicer setting side of adjustments might not work right in all cases.

See, look, searching for "undersize" using a forum search would have gotten you to the same answer https://forum.raise3d.com/viewtopic.php ... ize#p55431

And this mentions the new size adjustment feature in the slicer. By all means, experiment and try it, but a keyed hole is not a round hole right? So given that the software has to detect a hole, and then ONLY adjust for what it deems as an inside hole, we do not 100% know for sure if it will detect a "keyed" hole that thus is not perfectly round normal hole. https://forum.raise3d.com/viewtopic.php ... ize#p55437

Another topic on size calibration and some usage of that Ideamaker size compensation
https://forum.raise3d.com/viewtopic.php ... hilit=size

Again, flat out, a couple of us folks who have been 3D printing longer generally know and go the other route, compensate in CAD where we often can be more exact. Slicer compensation depends on the slicer being able to identify a hole, then apply compensation. Well the what if there is what if the slicer doesn't detect the hole you want to apply compensation to, or selects the wrong hole? By doing it in CAD, you eliminate the chance of the slicer randomly guessing wrong.

Some worthy videos since you are in the designing for 3D printing side of things.
https://www.youtube.com/watch?v=j6508J94VsA

Also, worthy of discussing- expectations.
In general, 3D printing at BEST should be considered a tolerance equal to one nozzle size. Just so happens that others generally agree with this well formed advice and experience over 10 years of 3D printing.
In other words- given a 0.4mm nozzle with an expected extrusion width around 0.5mm.
For desktop FDM machines:

Again, given the data in front of us, a 25mm hole exported in CAD at exactly 25mm, would already be incorrect in the STL export.
Then given the printer and it's tolerance of 0.5mm, a bore expected to be 25mm printing as 24mm = spot on within expectation.
roughly 0.5mm is error in the STL at export from CAD and 0.5mm is expected variance in 3D printing in general.

To get a better picture of what's going on you can't consider one dimension, or just inside dimensions. How do the outside dimensions of the model compare to nominal?

Jetguy wrote:"
Yes, inside holes ALWAYS are smaller than drawn in CAD. Not the fault the printer or the material. This is due to limitations of the STL file export and import process, what the STL represents, the fact that a curve is NOT a curve in the STL, it's a multi sided polygon. Thus the inside lines making up the curve of the inside hole fall well inside this exact bore size.

Just to get an image of this STL issue I see it like this: 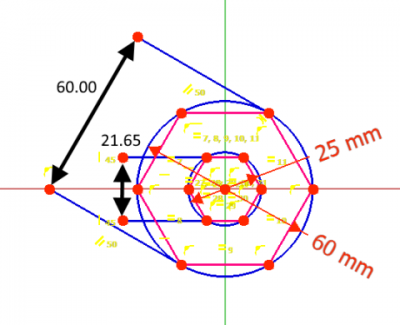 Now, I realize that this is not mathematically exact (In reality the STL image of this would have a zillion-sided polygon.) but I think it shows the general idea.

Is that the general idea?

A topic that will be important later on.
No, this statement is generally incorrect, "the STL image of this would have a zillion-sided polygon."
Let me tell you why. The more points exported, the larger the STL file is. Yes, most CAD programs have settings that can change how fine the export detail is, and yes, they can be increased- but defaults are defaults for good reason and super high detail large file size is not typically default.
Now in and of itself, you might first say no big deal, what's so bad about a large STL file?
Well first, the slicing program (Ideamaker or any other slicer) has to import and then place and render (draw on the screen) that large massive high density point cloud known as an STL. Then any transformation (movement within the build space) while placing this on the build plate, any scaling, rotation, or dozens of other moves now has to manipulate all those data points in 3D.
So you say so what if the slicer is a little sluggish while trying to move the STL, I have a fast computer, fast graphics card, etc...
Then you export the gcode.
The problem at this step is again, gcode in current 3D printing format, there are no curves- only straight lines. Each line is a line of gcode.
You now potentially produce a massive 100mb or more gcode print file with millions of lines and every line has to be executed without mistake.
But wait, it's not even to the printer yet. Thats just making the gcode. Now you have to transfer it across the network to the printer.
The larger the file, the greater the chance that one tiny line of gcode is messed up.

Oh wait, we aren't even printing it yet.
Now you have to understand the architecture and limitation of the raise3d printer design. The MOTION board and firmware is what actually runs the printer. This is what interprets and reads line by line the gcode print file, plans the acceleration and deceleration moves, and then sends those pulses to the stepper drivers in perfected timed sequences to result in hopefully smooth motion. But the key is, how it gets that gcode line by line, over a serial data interface. Yes, serial data, like old school 1990s dial up modems- serial at a baud rate. The front panel LCD computer is what you transferred the file to, but it doesnt actually print the file, it streams it line by line over this serial data limitation between the 2 processor system. And yes, there is a limit and yes, beyond a shadow of doubt you can hit it, and when you do, your print stutters.
So yes, technically, these printers have a resolution limit that is almost never discussed and yes, it looks really ugly when you smack into this trying to solve other problems.

What I'm trying to get at is, someone or somewhere you look at reading and trying to solve your current problem might mention increasing resolution or segment count or some other setting detail from CAD in effort to reduce the effects of the polygon crossing into the desired center of a hole. Use caution, that can cause more problems than it solves.
Not to mention, if you own this printer, it's good to know what it can and cannot do.
Here is that topic and while it was related to brim, the facts are valid, there is an internal limit and it is testable, it can be hit, it's related to segmentation in a curve. https://forum.raise3d.com/viewtopic.php ... ter#p27232

I have been doing a bit of experimenting. My printer is a Raise3D Pro2 and slicer is ideaMaker. My method is to print a test piecewith the Nominal Bore and then measure the Actual Bore. Then I use
((Nominal Bore)^2)/Actual Bore
to give an Adjusted dimension.

In my experience, the dimensional issues with 3D printing are realised regardless of shape. The limitations of the software & hardware and the physics & chemistry of the plastic all contrive to give me less than perfect accuracy. But it's consistent, internal features come out smaller all the time. So I allow for it at the design stage and sometimes I get it right first time! My workflow includes a trial print / design adjustment / trial print iteration, which sometimes take 3 or 4 cycles.

If I was printing your shape 1 or 2 mm's thick in PLA, I would probably allow 0.6mm 'shrinkage' as a first guess. If the part was say 10 or 20mm thick I would allow slightly more. I would apply the same 'shrinkage factor' if the shape was triangular, rectangular, polygonal...

Of course you can cause features to be externally bigger (and internally smaller) than the design intent by over-extruding. Did you start with a fully-calibrated system for the filament you are using?