Share your successful printing settings with others here. If you have any question about the parameters or printing skills of some filament, please find here.
Post Reply
6 posts • Page 1 of 1

I made two changes to a template which had previously produced acceptable horizontal surfaces trying to stop overextrusion of support material. I changed the Support Flowrate from 100% to 95%, and the Support Speed from 50 mm/s to 60 mm/s. The print went extremely well - or so it seemed - but the top surface was the proverbial dog's breakfast: 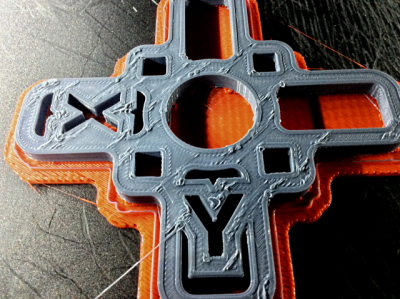 When I check the gcode you are letting your print hang in the air and not be leveled with the raft, is there a reason for this? That would probably remove the need for support but would not helt your other problems.

My model is 'hanging in the air' because I am trying to find settings which allow:
1. easier removal of the model from the support material;
2. better surface finish where building on support.

Vagulus wrote:My model is 'hanging in the air' because I am trying to find settings which allow:
1. easier removal of the model from the support material;
2. better surface finish where building on support.

It's an experimental issue.

There are 2 major factors that affect layer bonds. This is what matters when you want a layer to stick or in support, want a layer to not stick.
Nozzle height to the top of the surface AKA layer height or gap or any feature specific to the layer involved. Example is support adds a gap beyond normal layer height values. This determines how smashed the round noodle of hot plastic coming out of the nozzle is pressed into the previous layer. Less smash o greater gap means he plastic just kind of lays on the previous layer with little to no force.

The second factor is a combination factor, but it's how much heat does the previous layer contain, and then how much heat is your now printing layer adding to the equation to melt and bond the previous layer to the current layer. In other words, there is a range of temps in which you can melt plastic, but just melting plastic is not 3D printing. We typically put slightly higher temps into the plastic than what is the lowest possible temp required to melt it, and that's because we need to have enough heat that the hot plastic actually bonds and melts slightly into the previous layer. The sad truth is, the default temps and often filament manufacturer recommendations are on the high end of the range for maximum layer to layer bonding. In a support situation, that same temp might be on the too hot end of the range putting too much heat into a bond you want to be weaker. But, the OTHER huge factor in this is how recently time wise the previous layer was printed and thus how much heat is still in that layer. This is a factor of layer print time, and extremely short for a small object and longer for larger objects. If you print something small, and you fail to adjust extrusion temps from defaults, likely, on a per layer basis, you are printing so fast and jamming so much heat into the print you runs the risk of distortions from this heat buildup- let alone the fact a breakaway support layer you basically permanently melt bonded because of too short of a layer time dwell and far too much extruder temp in the plastic in he first place.

Example is, if you are printing a single object less than 2 inches in diameter, even worse, under an inch, and then trying to do any kind of support, you probably have failed to tune the extrusion temps for the correct balance of layer to layer bonds while not putting so much heat into it for small feature distortion and worse, you think some magical setting like additional layer gapping for support interface layers is somehow going to weaken the bond- your are literally selfus defeatus maximus.

The correct answer is again, the following basic advice we have been giving for years.
#1 tune plastic extrusion temps for the materials you are printing but also the general size and detail of the object. Example is, I'm printing some huge part and need maximum strength, the print has no overhangs and no support material required- heck yes, a little extra heat make that a stronger part. Conversely, printing a small single object, with overhangs and small details, you absolutely may have to lower extrusion temps. The best tuning is met by printing overhang tests, cone tests, and other temperature style small object test prints and learning and getting a grasp of how a specific material reacts and tunes to different extrusion tests.

#2 Print multiple small objects rather than just one when you have to use support or the object is very small and failing do to heat buildup.
Again, as simple as adding more copies or multiple small objects, or add a purge tower or object. This forces a longer layer time, and also forces the nozzle to move way from the object limiting radiated heat from the nozzle and heater block hovering over the layer retaining the heat.

What you don't do:
Think that adding ever taller gaps for support layers because they are sticking too well is the right answer. Think about it, what happens when you increase the gap? You might as well not be doing any support at all. The current layer is supposed to be at height X and without something underneath- gravity is going to pull it down below position X. The whole point of doing support is to support the layer so it prints at layer X right? Which is why, adding more gap to support on a small object is a self defeating setting. You never get the result because you are changing the wrong variable.
Last edited by Jetguy on Sun Jun 09, 2019 4:34 pm, edited 2 times in total.

I made two changes to a template which had previously produced acceptable horizontal surfaces trying to stop overextrusion of support material. I changed the Support Flowrate from 100% to 95%, and the Support Speed from 50 mm/s to 60 mm/s. The print went extremely well - or so it seemed - but the top surface was the proverbial dog's breakfast:
Calibration Cube-Scaled.idea

Let's talk about this picture.
#1 notice the shiny plastic surface finish. That generally indicates you are using the higher end of the printing temperature range for a given plastic and the surface looks sunken in and all extremely on the hot side of melted together. This is great for an extra strong print with no overhangs, no support material, and something where a tradeoff of just raw brute strength VS final surface finish and quality is OK.
It's however a total nightmare and completely wrong for a print that is a relatively small size or surface area when looking at the object on a per layer basis where the print time on a given layer is low.

#2 Notice the string left as the nozzle rose the top. That's yet another indicator- a stringy, fuzzy, hairy print defect is yet another sign of using way too high of extrusion temperature for a given plastic and given print. The plastic tends to drip and ooze out of the nozzle and leave strings and fuzz and other defects behind.

#3 Looking at you supplied profile, you specifically mention Esun PLA, and historically that is a lower temperature PLA that has limited fillers and thus has a low melting and 3D printing temp, often recommending lower than 200C temps, and yet you are using 210C in your profile.

So in no certain order, I'd undo much of what you did.
I would definitely never ever tell someone to gap a model in the layout.
I would not recommend anyone increase layer gap for support or raft interfaces
I would definitely not tell someone to begin with 210C for an Esun brand PLA.
I would print 2 copies the cross side by side and examine if layer time helped with the impossible to remove print aspect.
I would lower to 195C if not as low as 190C for Esun on a print like this.
And all of this applies double to the 2 cube print example you attached. The small size of that, no way with those settings in your profile would it expect for it to be "good" print. I's small size, low layer time, extra hot filament settings, gap intentionally for no reason, that's just the wrong answer. Same object, print 4 of those using copy paste or the multiples function, lower the extrusion temps to reasonable settings and there should be an improvement.

Thanks Jetguy
Your detailed and informative replies are very much appreciated. I have printed them so I can go over them again and try to absorb all of what you were saying. Experience-based information is invaluable to people like me who are just starting out in this game. Your diagnostic hints are great and changing my print temperature to 195 from 210 had a dramatic effect giving vastly improved results. 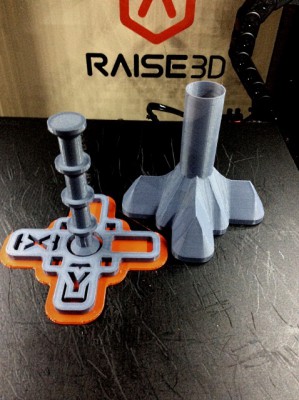 You see the surface of the calibration cross is smooth, and the print process was so stable that the Wipe Wall (which I lifted off and placed on the right) completed without collapsing into a woolly bird's nest.