Share your successful printing settings with others here. If you have any question about the parameters or printing skills of some filament, please find here.
Post Reply
5 posts • Page 1 of 1

Hello, I'm trying to resolve some stringing and poor surface quality under supports with PLA fanspeed is set at 100. It looks like it is under-extruding, but I'm assuming that is because it doesn't have a surface to squish the filament against. The top side of the print looks beautiful. Printed using s3d. Any help would be great! 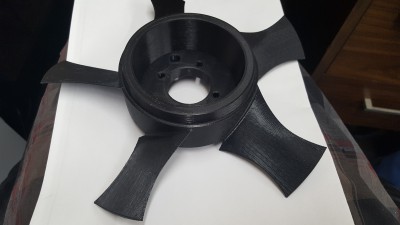 ^top side of prop 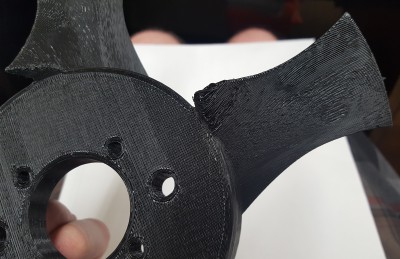 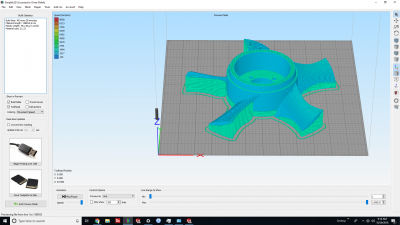 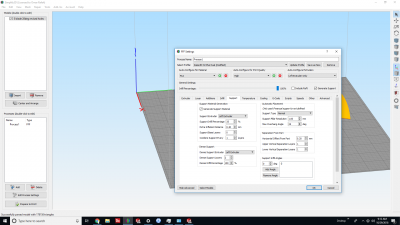 I have the same issue with overhand. It seems like the last layer of support is stuck to the part making it look nasty. They are hard to remove also. Most of the time, I'll just keep them there if the dimensions are not critical.

is there any update on this or a fix? I am having the same problem.

So there's a cardinal rule for printing plus a lot of trial and error. If the current print layer is <= 45 degrees of overhang (at least for PLA, ABS, PC and other commonly used materials), then you typically won't have any problems with material being printed and staying where it should be. If your overhang is > 45 degrees, then you're playing with fire.

That said, some materials (PLA for example) can tolerate a bit more overhang, but not much. What's coming out of the extruder tip is one gigantically long cylindrical strand of plastic. Being that it's cylindrical, if you take a cross section of any two dimensional point, then you get a circle. So you're printing a circle on top of another circle. The fact they're in a melted state allows for a little bit of bending and bonding to the previous layer's circle, but there's a limit to that versus gravity, and the molten material. The reason why 45 degrees matters, is on two perfect smooth circles, that's the point of no return where gravity wins in sliding the top one off of the bottom one. In 3D printing, that's the point where 50% of the material being extruded is vertically (Z-axis) in line with the previous layer, and 50% is not. This matters as gravity pulls straight down. More than 45 degrees of overhang puts more than half the weight of the material not sitting over the previous layer, which in turn allows the material to flex, warp or fall off of the lower layer prior to re-solidifying out of it's molten state. The only way "around" this is to extrude the material as close to the molten point as possible, and solidify it as fast as possible, but that isn't a great solution as you have a smaller contact point between the two layers as compared to stacking two layers along the z-axis (same xy coordinates). To clarify that more, the "circle" of the molten extruded layer will warp to fit around the previous cooler layer (so it's not exactly a circle anymore, but close to it) and allow for a greater bonding surface area. If there's air instead of a prior layer of plastic, then there's no bonding happening.

That 45 degree rule applies to the x and y coordinates. There's three ways to properly deal with this problem given the restricting laws of physics! First option: modify your parts to never have more than a 45 degree angle along the Z-axis from start to finish. That obviously won't work for a lot of applications. The second option: print the part with a finer z-axis value (so instead of 0.2mm, print it with a smaller step down to 0.01mm as some of these model printers allow). For pieces with curves which provide a changing amount of overhang angle, this can help around the 45 degree mark, but it still doesn't fix angles way over 45 degrees. It also can introduce a slew of other problems as the material's size is much smaller and will cool differently due to lower mass as well as many other variables. It will also drastically increase your print time. Thus, the third option is usually the best solution and that's to print with 1mm supports at an appropriate density for any overhang angle > 45 degrees. Supports will provide a platform for > 45 degree overhang angles to properly adhere to and cool to the surrounding material without gravity briefly moving the molten layers off of where they are supposed to go. As long as you have better adhesion to your part extrusion as opposed to your supports, it'll be easy to remove the support structure without damaging your wanted parts.

With that in mind, to answer the OP's initial question, you want to set your supports to 1mm thickness, ensure a higher density, vertical offset value to 0 or 1 (I run it at 0), and horizontal offset of 0.5-0.7mm (with a 0.4mm nozzle). Also for PLA, you can use PLA to support PLA, so make sure you don't ONLY use supports that touch the build plate. You want supports everywhere. For non build plate starting supports, make sure you include a couple (2-4) dense support layers at the top and bottom.

PLA brand also matters, and I'll give credit where credit's due, I don't have a problem with Raise3D brand PLA across the board.