Share your successful printing settings with others here. If you have any question about the parameters or printing skills of some filament, please find here.
Post Reply
4 posts • Page 1 of 1

Just wondering if someone has good settings they can post for under part supports.
I having trouble finding a good setting to get the support layer off the part.
90% of my prints are ABS some in HIPS.

This function of making a layer stick but not stick (be it raft, support, or whatever) is a function of the plastic itself, the environment, and time. the time factor is how long the raft or support layer is allowed to cool and become solid, before the next layer is gapped and placed on top. If the time is short because the object is small and thus small layer time, you get too good of this layer adhesion. Too long or too much gap = poor or no adhesion and bad first layer surface finish, because again, you are drooling the layer over a gap so adjacent threads do not bond to each other.
I discussed this here in a raft question, but the premise is the same. The variables are the same.
viewtopic.php?f=8&t=8419&p=30761&hilit=raft#p30758

All you have to do is replace the word "raft" with "support" and this is the answer:

By definition, you have to have a gap and so first layer is not squished flat and bonded side by side to adjacent threads when using a raft. Otherwise, you could never remove the raft.

The trick that makes a raft removeable= weak layer bond.
How do you make a weak layer bond? All the same reasons printing without a raft doesn't stick:
#1 you print with a nozzle height higher than the nozzle width, so the round hot noodle of filament is not squished into the previous surface.
#2 you wait a period of time, such that the previous layer has cooled as much as possible, so that when the actual print layer is being placed on the raft fails to melt and bond into the raft top surface because it's not squished and also, there is maximum temperature difference hot layer, vs fully cooled layer.

So where does this go wrong?
Well, on a small object (say something less than 50mm square surface) then the time between the last layer of raft and the first layer of print is a bit shorter, The layer of raft still is just freshly put down and still cooling. Immediately printing a smaller object on top- it sticks to the raft too well. So what does the user do? They follow instructions and increase the first layer gap of the print layer to raft layer in the settings. Fine, that might work for a small object, but now we make that drooling down first layer and adjacent thread bonding just absolutely horrible. You get the exact bad first layer of the print as shown in the photos. On big massive flat area objects, you can have that small gap, and most times- provided your extrusion temp is not too high, your bed temp is not too high, then sure, the time to print a layer is so long, we don't get that hot printing layer over a recently printed raft layer stick.

Again, the bottom line reason why you are having a problem "having trouble finding a good setting to get the support layer off the part."
The problem with someone sharing any specific time or setting here- that's all dependent on how big the part is, how many parts on the build plate, how much area and thus time for a layer. Then add in environment variables (ambient chamber temp, cooling fan situation, specifics of extrusion and bed temp) and then lest we forget, the material bring printed itself (exact chemical details of the plastic).

So what is the trick?
#1, if printing small object, print multiple at a time to force a longer layer time and thus ensure any bond to support material is reduced because the support layer is well cooled before the next hot layer is placed on top.
#2 Increasing gap between the first actual print layer and support material is not the best solution. You can play with this, but again, making it larger pretty much ruins the first layer of the actual object.
#3 If you cannot print more actual objects- fine, add fake objects like purge towers and other features to again, just take that little bit more time per layer.
#4 DO NOT use slowdown function to keep layer time. This causes nozzle dwell (nozzle transfers more heat to the layer and surrounding material) and defeats any cooling effect.

Again, there are a few main factors affecting general layer bonding, and those same factors come into play in specific layer bonds like interface layers between raft or support material and the layer that prints on top.

#1 Extrusion temperature. Far too often, especially with higher temp materials like ABS, HIPS, Nylon, and PETG, the user is using ever higher extrusion temps to put more heat into the layer so that it bonds better to the previous layer. Well, this same factor is the exact opposite for bridging performance (threads sag when spanning open space), raft interface (you literally weld the part to the raft), and support material (impossible to remove and welded to the part). Lowering extrusion temp by 5, 10, or even 15C can be the difference between a part being impossible to remove and working like you expect.

#2 The second factor is layer time. This is because time is just as much a factor as heat. How long the previous layer has time to cool before the next layer is placed is a function of object size and speed of printing. It's simply how long is the total path the nozzle moves and how fast for a given layer. But again, what is happening at the physical level, you just put down a hot layer of plastic, with ABS or HIPS, you likely disabled any layer cooling fan function, so, the layer cools at a rate that is determines by how hot you extruded in the first place, how high the heated bed temp and ambient chamber temp is, how long before the nozzle is literally laying the next hot layer right on top of this layer while it's cooling.
Again, the general fix here is print more small objects, or intentionally add another object like a sacrificial tower to force the extruder to move away on that layer and then waste time before printing another layer.

#3 is the support layer gap compared to installed nozzle diameter and extrusion width. This is intentionally leaving a gap so the filament of the actual layer drools over the previous layer rather than being smashed by the typical layer height rule of 1/2-3/4 nozzle diameter. Again, the idea is a tall layer gap, so the filament being put down intentionally is not making maximum contact. The problem is, increasing this gap over the stock settings, you basically ruin the whole concept of support. Why have support at all if it's greater than 2 layers gap or droop in your actual overhang layer of the model? Again, increasing this value higher than the stock value does make the support stick less to the part, but also kind of defeats the whole concept of support. 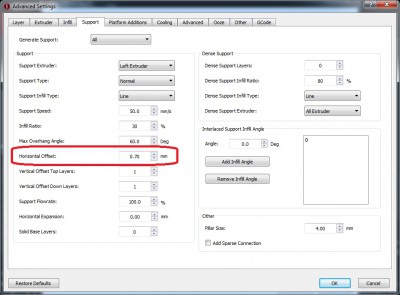 Last, as in layer time, I strongly urge not to use these settings and try to increase layer time using this method. This is shown withe the default values. Increasing minimum layer time then forces the print for that layer to move slower than the normal layer settings. The minimum layer speed is the threshold to keep the speed from going to zero on a really small layer. Again, raising minimum layer time or lowering minimum speed would then enforce a slower layer, but I've explained why that is actually more harmful than any "fix" is would provide. 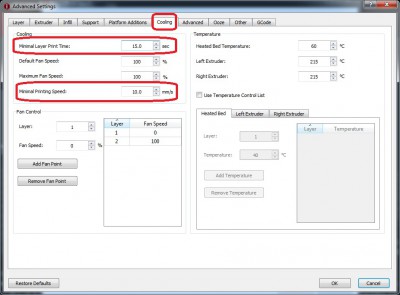