Any topics that don't fall into above categories. Please note that your thread may be moved to other discussion boards.
Post Reply
24 posts

I know this is an older post - any additional information on vacuum drying?
I put together a tank and pump and am trying it -

With an empty tank, my pump will pull the chamber down to 30" on the gauge (so calibration might not be spot on) but it goes to 30 and stops - so I'll take that as "full vacuum.

With a spool or two of filament, it drops quickly but NOT to 30 - that takes a variable number of hours before it finally goes to "30" but so far, each time, it does get to that point (eventually)

I read that using the gas ballast valve on a pump can reduce the maximum vacuum pulled BUT allows the moisture to escape without condensing in the oil?

I'm new to the whole vacuum field but I'm four spools in and my oil is still clean and clear using the ballast valve until the very last draw on the tank.

Its slightly disappointing - as the frothy white contaminated oil seems like a sure sign you are doing something! but if using the ballast vale is actually allowing the mositure to escape without being condensed in the oil, that seems like a really good thing and would save folk some time.

I thought about this but I wasnt sure if its going to work. Its a good thing you did the experiment. Ill buy my own vacuum next month.

I'm still using the vacuum pump for drying. i haven't tried adding heat as JohnSays suggested. As I mention early on, it isn't as quick as I as hoped, but it works. I recently made a drybox to use during printing with a Rubbermaid 21 cup container.
https://www.amazon.com/Rubbermaid-07169 ... B00NP6T9JE <- Don't by them here - the local grocery/mega-store had them for $7.50. I've only run a few prints with the drybox, but I got the best looking PC parts I've ever printed after vacuum drying and keeping the spool in the drybox for printing. Also made a big difference in print quality with CF EPA filament. While I've never been concerned with moisture in PETG, some small tests I did have me thinking that will be worth drying out as well.

Here's the insert I made for the container. 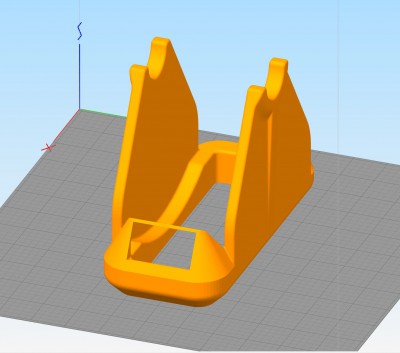 A bit of 1" PVC pipe for the spool core. The rectangular frame is for one of these:
https://www.amazon.com/gp/product/B07NSZ9XPY - readable through the plastic. I throw a few big dessicant packs in the vacuum pump with the filament and pitch them all in the dry box. I just put a spool of PETG in the vacuum. Took about 36 hours before the spool stopped losing weight. The weight of the spool decreased by about 2 grams. Not a lot compared to other materials, but that's 2ml of water. I also use the vacuum for drying my desiccant packs.

I haven't tried to do anything to eliminate the water in the oil either - I just see it as the nature of the beast. I bought a gallon of oil so I can keep a few oil changes worth in circulation. When the oil level gets above the top of the site glass I do an oil change - just takes a couple minutes. I collect the wet oil in a plastic milk jug. After I have a few changes worth of wet oil I put it in the freezer. When the water is frozen I pour the oil out of the jug. It's shocking how much water is in the used oil. I then use that oil for subsequent oil changes.

I know this is a really old and long thread but I thought I would add my findings so far... Largely mirroring Zemlin's data and experience.

Zemlin has documented the process well and vacuum drying isn't fast but it does seem to work given time.

This is a L O N G post - I apologize - but I wanted to throw my findings out for anyone interested in vacuum drying in the hope that I can save you a few steps or disappointments.

I started with a small vacuum pump that was rated for 5 microns - it is a little 20 l/min rated pump and would get the chamber down to "30" on an analog gauge - this would take significant time with a roll of filament. Pre heating the roll to near the GT temp for the material before placing it in the chamber helped release moisture faster but because you are evaporating moisture from the filament, you are also cooling the filament as it dries, so the pre-heat seems to have a very limited benefit time - somewhat more than an hour but not past two hours.

This got me much more intrigued - would a "real vacuum oven" be the ultimate filament dryer?
They ARE used very widely for drying plastics - especially plastic pellets before extruding... might the expense be worth the benefit?

More research (and nearly spending the cash for a vacuum oven) I found that while radiant or conductive heating of items in a vacuum works well for thin samples, homogeneous heat conductive samples (metals) and powdered materials, its unlikely to penetrate a full roll of filament with any speed - as it has to heat the surface and that has to transfer in through contact and conduction until the entire mass is heated - a very slow process with plastics, especially thin round rod wound on a spool - there is little contact area between the layers and adjacent wraps of filament - further slowing the process. Remember, there's no air left to conduct the heat across gaps - only direct radiant exposure or conduction work in the vacuum.

Because heating seemed challenging, would a better/bigger vacuum pump improve the process?

Find, buy, rebuild a bigger vacuum pump. A Welch 1402 bought in poor shape but re-buildable - Not for the faint of heart - the rebuild parts cost me more than the pump did but it was a "Covid Project" and kept me occupied for several days. Now I have a great tool at a fraction of what a new pump would cost. eBay local pickup - its nearly 100 lbs and would have cost a fortune to ship.

Now armed with a 160l/min pump capable of 0.10 microns - measuring the vacuum level seemed important and the analog gauge wasn't helpful at these levels - research, purchase test a digital gauge rated for down to under 1 micron (still an order of magnitude away from measuring my true capability, but at least now I had some resolution in the 1-20,000 Micron range where the analog gauge was stationary the whole time. I bought a used CPS VG200 unit on eBay

This allowed me to see two interesting things -

First, the pump will easily bring the digital gauge down below 1 micron and it reads "0". With filament in the tank, this won't happen until the moisture is so low that the vacuum pump is keeping the chamber below 1 micron despite the filament still "boiling off" some moisture. Closing the valve to the chamber, the digital readings immediately start rising - so there is sill moisture being released but with the digital gauge this became clearly visible - something that was completely invisible with just the analog gauge. This showed why leaving the chamber sealed off with the pump stopped and letting the spool sit didn't seem to have much effect - even though the analog gauge still showed a full vacuum, the contents of the tank had actually reached stability - the moisture content in the tank balancing the filament moisture and not continuing to dry - not until the pump was removing the moisture again.

Second, once the filament is actually completely dry - closing the valve and watching the digital gauge, it will be several minutes before it even comes back up above 1 micron - but at these vacuum levels, even the "pot" style chamber leaks somewhat - and the tank won't hold a sub micron level for long without the pump - even with nothing in the tank.The analog gauge won't show any change for about 2 weeks.

Lastly, larger diameter vacuum tubing and ports are hugely significant (although somewhat counter intuitive) a larger path for the stray molecules trying to be pumped out is MUCH faster than a smaller tube - (NOT something I would have thought and barely believed until I tried it).

As for where the moisture goes?
it goes into the pump oil - the amount of time we need under vacuum, cold traps aren't a good or cost effective solution - neither are oil free pumps (I wish). A foreline trap or molecular sieve don't seem to have the capacity to hold all the moisture we are dealing with and just saturate and then have to be baked dry again (at 500+ F for two hours) While I bought and tried these, the balast valve approach is better and much easier.

Many Two-Stage pumps have a balast valve (more reading and didn't make complete sense at first). This allows the pump to operate in a "less effective" mode where you introduce a small leak into the first stage of the pump via the balast valve - this does two things - it causes the pump to continue to work "harder" while at low vacuum levels where there really aren't many molecules being moved - this causes the oil and the pump to heat up and the moisture in the oil vaporizes and exits the pump in the exhaust. It has very little effect on the second stage and the actual vacuum performance of the pump is only slightly decreased - a completely acceptable amount for our drying process.

My Oil will cloud up when I start removing moisture, but with the balast valve slightly open, the oil clears again completely over the next few hours - even when drying freshly picked herbs with a ton of moisture - if the run time is sufficiently long (and it will be with herbs or filament) the process completely removes the moisture from the oil again as its running - I was very skeptical but after dozens of runs, it completely eliminated residual water in the oil - Since the new pump holds over half a gallon of oil, it was a relief to find I wouldn't have to do complete changes every run - and the pump stays better protected while running!

Running cost for the pump has been nearly identical to the dehydrator I was using and results are better and easier - the dehydrator works best near the GT temp of the material - if drying nylon, you can't also dry PLA (unless you want to stick a whole roll of PLA filament to itself so it won't even unwind - yup - done that) In the vacuum, you can run mixed materials and while they do dry at different rates, it doesn't damage the filament or the spools.

One area for further research - it DOES seem that I can dry PLA to a point of "too dry" - it actually cracks and breaks while feeding on the printer - It may be the specific material or the history of that roll - I have not investigated it enough to know but one spool became almost unusable. After sitting out for several months, its still brittle but finally usable.
Post Reply
24 posts