Any topics that don't fall into above categories. Please note that your thread may be moved to other discussion boards.
Post Reply
14 posts • Page 1 of 1

I purchased the printer on 8/2/2018 after a lot of research on the printer and it's issues. My main goal was the printing height which I needed for some projects as opposed to my 10 inch X,Y, printers which would require smaller parts glued together. Full disclosure, my other printers are Pursa style, single direct drive extruder and one is Dual Bowden extruder but only about 10 inches in the 'Z' direction and a Resin printer. The Raise printer prints PLA with no issues at 60C bed temperature but when I try ABS or ASA at 80~110C bed temperature I have nothing but failures. After many hours releveling the bed according to Raise, Jetguy and other Utube videos I still have consistent failures especially in the center of the bed. My other printers are not the enclosed style and they will print ABS/ASA on glass bed with glue which I have used for years now. They are a 4-point leveling system.
I have even tried leveling the bed heat platform to no avail.
What happens is the bed will become hilly at temperatures higher than 65C. Attached are two pictures of the same object, one in white PLA at 60C bed temperature and after adjusting the 'Z' stop for higher temperature is an ASA failure.
I even checked the bed with my machinist straight edge for flatness and at cold temperature it is flat.
So do I have a very expensive PLA only printer? I am starting to think so.
Any help would greatly appreciated.
Thanks 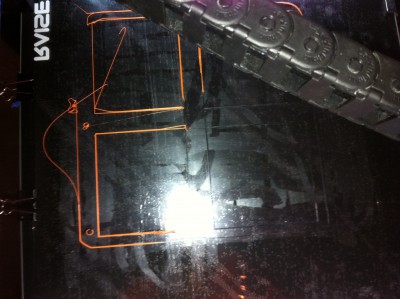 Whether you have installed fan cover to block the downward cooling air to model?
And seems you are using the glass side, which type of adhesion you are currently using for your ABS print?

Thanks for the quick answer. No I did not use a fan cover block. I am using glass with glue which I have been using on my other printers for years. However that is not the problem. If looking at the pictures you will see that the ABS/ASA print is not printed in the middle at higher temperatures due to humping of the bed where as the PLA is perfect at the lower temperature of 60c. I have spent countless hours leveling the bed with a dial indicator when the bed is cool and at 60c and then 80c to 110c. Same results of failed ABS/ASA prints but PLA prints are perfect. It seems like the heat platform under the your glass plate is deforming the glass plate at the required 80~110c temperatures. Could this be possible? Thank you.

Vicky,
Still learning how to use this forum. In answer to your reply I use glass build plate with glue which I have used for years now.
I am currently printing out a new style dial indicator mount in ABS on one of my other 3D printers and use it to relevel again the N2 glass build plate. In answer to using the fan block, no I did use it but the main issue is major changes in thermal expansion of the glass build plate which I am going to recheck using the new dial indicator mount with the new glass plate purchased at the time I bought the N2 plus at different temperatures.
Thanks

When printing with high temperature filament, please make sure that you have installed the bottom fan cover to block the downward cooling air to printed models to reduce the shrinkage caused by temperature difference.
For the bed leveling, I will recommend to check the levelness for the temperature you are going to print. The levelness of the bed will be changed a little due to heat. It will be better to double confirm before changing the temperature. Sorry for the inconvenience.

As you probably know ABS is much more critical about the levelness of the bed as well as the nozzle height from the plate. Make sure you have the fans blocked and the cover on top to keep the heat in for best results also. Sounds like you are already used to printing ABS so you may already know all of these things.

I like to make my 1st layer height pretty close to the bed so it sticks really well.

Thanks KS_Husker for a reply. Yes I have been printing ABS on my other printers but the issue I have is the bed is very wavy in high bed temperatures (80~110c) There is a problem with the center of the bed and I have checked by dial indicator many times at these temperatures leveling the bed. If you were to see my bed you would see that the center pull-down screw is very long compared to the other leveling pull-down screws and I am afraid of busting it if I apply any more pressure. All of my ABS failures are in this area. At this time I will be out of town on a job but will work with it more when I get back. My other printers are 4-point and 5-point leveling.

Would you mind enable Raft to reduce the influence from bed levelness?

Thanks for the reply Vicky. I am back from a job out of town now and I will be working on ABS issue soon. A raft might work but the screws are already raised up at multiple areas except for the center pull-down screw which is pulled down very far. In addition if I use a raft on a 12 inch print it would be off the edge of the glass bed toward the door (Y0,X0). The limit of a full size print at 12 inches (304.8mm) 'Y' needs to have the glass bed moved about 3.175mm out toward the door and a global off-set of -1mm. Otherwise only a full print without these modifications is 11.875 inches (301.625mm) in the 'Y' direction toward the door.

Thanks for a reply Shelton. Yes I did that leveling the bed at 110C but it is very wavy between pull-down screws positions. I am still trying to resolve this otherwise it is a PLA only printer......

Shelton, sorry I should have added that I leveled the heat bed at 110C and then Glass build plate after the heat was on for about 20 minutes for thermal expansion......

I have noticed that it is much more finicky with ABS than PLA. With PLA it doesn't seem to matter as much how well you smash that first layer onto the bed, but with ABS I have to have it smashed just right or it won't stick hardly at all. It seems like it has to be flattened out pretty good to get good adhesion on that first layer. I have mine set quite a bit closer than they recommend with the feeler gauge to get good results every time. Otherwise I was getting failures every once and a while with ABS even when it worked fine with PLA.

KS_Husker, Yes ABS is very finicky. But I have been through the heat bed leveling process at 80-110C many times and all failures have been near the bed center screw area. The heat bed gets very wavy at those temperatures between the pull down screws (up to .003+). So I have narrowed it down to the heat bed and the lead screw platform it attaches to. Without going in to extreme detail after many hours of dial indications and trial prints I have decided to leave it as a PLA printer only. Now on the hunt for a printer that I will use for ABS/ASA only at a large bed, but height will not be like the Raise N2 plus but at least it will beat gluing together small parts.
Post Reply
14 posts • Page 1 of 1