Raise3D is always listening. If you have a feature requested related to our product, or if you have new ideas that need attention from the community, please post here.
Post Reply
5 posts • Page 1 of 1

While Ideamaker is still my goto slicer, I try to follow the developments of other slicers too. In a recent video of prusa they announced a new feature called monotonous top infill. It is demonstrated in the video (starting from 38:16) on youtube and it seems rather simple to implement in Ideamaker too. As far as I can see Ideamaker doesn't have this feature and I think it would improve top surface finish. In attachment I put a screenshot of Ideamaker starting the top layer in the middle and thus creating ugly lines in the finished top layer. They also show how you will be able to paint support and maybe paint the Z seam, so this is also something to consider.

As a second request, it would be very helpful if some sort of preview would be available of overhangs (at an angle that the user specifies) so you can troubleshoot problem areas more easily. Cura has this feature as default and as an example, I attached a screenshot from the Cura preview that shows overhang areas of a printable dog statue. 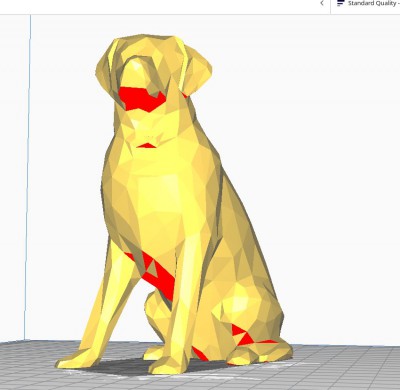 Thanks for your suggestions. We will add monotonous top infill into future versions.
We are currently trying to test Display Overhang. If everything gets done well, you may can see it in next version. You can check overhang section according overhand angle defined in Manual Support.

Thanks, looking forward to it.

maybe its best to "jump over the hole" every time, every line ? with retract, of course.

The traveling path here for fill lines are not only avoid moving acorss holes, but also when some lines have completed, the nozzle needs to move back to the section to print the rest. So we need define the best travel path we can find for each fill line from boundary when needed.
Post Reply
5 posts • Page 1 of 1