Raise3D is always listening. If you have a feature requested related to our product, or if you have new ideas that need attention from the community, please post here.
Post Reply
12 posts • Page 1 of 1

These machines we have are basically little more than beta testers. I am beginning to be annoyed at finding out about changes to the machines from user posts or just tripping across them. All users should be emailed when changes are made to the machines and the parts and instructions made immediately available. When I bought my first machine right off of the Raise3D web site I did not have the idea I was getting a half done tester, but that is what I have and I have had to put a lot of work into getting both my year old and two month old N2s to even print.

The reset button is a good example of something that should be made available to all users. Other examples: the added LED strip, double latching the filament door, the better end stop switches, upgrades to the LCD enclosure, and etc. I'd like to know, for example, why R3D changed the stepper motors and why my gantry moves so much more easily on my new machine than my older one.

At first I thought that the Raise3D forum was a community of end users reporting back to Raise3D and helping each other with the printer. However, I now see it as more of a bypass of Raise3D Tech Support. I don't know what we would do without JetGuy, Trhuster, Andy Cohen, Socke, firesped, rlballard, and others. Given the number of people adding real-time bed leveling, 3rd party extruders, testing filaments, and simple things like adding a locking nut to the z-height, and cooling solutions. I don't get the idea that Raise3D is trying to Raise the standard at all. If they do not listen and act, and do not communicate changes then they are not fostering a community. Where is the hot list of items that are set for change or even the list of changes made? Where is the voting on feature revisions/additions? Where is the feedback about our input? Even the firmware seems completely dead-ended without any plans to upgrade or improve. Why not switch to Repetier or implement the final version Marlin 1.1 and it's safety features? I just had two run-away hot ends and had I not been there I would have had - at best -- a melt down and at worst, a burned down office. Bed leveling is certainly a hot topic on the forum - automatic and manual. But it is not being addressed by any voice from R3D. The same with cooling.

Frankly, I cannot see Raise3D getting the stellar reviews they could have if they do not fix some very basic problems: non-real-time adjustable bed, flakey extruders with too heavy a print head, poor z-height repeatability, inadequate software/firmware, and most importantly: extremely bad quality control on the assemble line. Addressing that poor quality, I did an extensive write-up of what I found wrong with just the assembly of my last N2 and never even got a response to all that work despite a few nudges from myself to get a response. The printer I got was basically junk. It would have never printed anything it was so badly assembled.

So two major problems there: (1) That lack of feedback does not foster cooperation and certainly does not reward willingness. The only real coin that R3D has in its users/guinea pigs is a willingness and that needs to be fostered. We guinea pigs are putting up with a lot in the way of an "almost 3D printer." Apparently there is no manager at R3D that understands this vital fact. Reactionary responses to forum messages are not enough. They need to be pro-active to our input. (2) How can a printer that cannot print when it arrives be considered as "raising the standard"? Hell, it would be a huge fail in any review.

I suggest that Raise3D needs to raise its internal standards before they try to raise the industry standards. Income will follow.
Last edited by JohnSays on Tue May 09, 2017 4:51 pm, edited 1 time in total.
- John

John, I fully agree.
One more point: At least in the beginning, R3D claimed to build an 'Open Source Printer'. And now, more than a year later, the only thing I can see is an outdated Marlin. No open hardware, no open LCD software. R3D, please look at companies like BCN3D or even Ultimaker. They have documentation for everything, drawings and 3D models of every single part, BCN3D is also offering upgrade kits for their printers.
Sorry to say that: R3D you are far, far away from raising the standard!
Hopefully, somebody at R3D will awakening ...

When will we be able to make changes to the LCD software? There are a few things I've been wanting to change.

Every suggestion and mod here, we have fully marked and noted.
Some have been already started testing on our side. And some still need more design and discussion inner.
Please understand that we are a company. If we want to change one part, that needs several department to work successively. It won't be such quick for us to update a new design into manufacture side directly from R&D.
What we will experience is collect customer's advise, discuss, test, fail and discuss, test for several times inside R&D. Then small-scale batch test in manufacture department. If pass, purchase department informs suppliers. If not pass, need more discuss and test.
Then wait suppliers complete the first batch. Then install them onto machines. Test prints. Stock and wait for ship or truck to pick up. Then shipping to resellers' warehouse (several days to one month, depends on shipping way). And wait for buyers to pick up or ship to buyers.

We are so sorry that we didn't notify which updates were done in time. We will improve this part.
We did have some problems before. But we and our factory is keeping on improving ourselves now. Any quality problem annoying your, please make contact with us on support system. So that we can collect more information for our factory to improve.

For open source, we haven't promised open source before. Expect motion board firmware which we have uploaded our source code on github already.

Thank you for the response Vicky. John has helped me greatly with the problems i have had with my printers. However, I am very persistent and curious by nature and so I am willing to delve into the problems and correct them. I have seen postings from people that are not so -- shall I say -- inclined. These postings hurt Raise3D. The problems I have had with my printers have educated me quite a bit about how my printer works. From that viewpoint I can be glad of the experience. On the other hand, from the viewpoint of, "I need to get my products out right now," this process has been very frustrating and I am considering purchasing my next printers from Zortrax or Ultimaker because I cannot spend weeks working on my printers. I got this last one in Feb and it is only the end of April that I was able to make my first print. The construction quality was so poor that I was tempted to completely tear down and reassemble the entire printer. That is not a good thing for my production or your reputation.

There were several reasons that I bought a second N2. One of them was that I am familiar with it and did not want the learning curve of a new brand. In retrospect, I would have rather have had the learning curve of another brand over the multitude of problems I had with this last N2. I would have spent a lot less time and gotten a broader understanding of 3D printers.
- John

Did you figure out what caused this one?
*** "and why my gantry moves so much more easily on my new machine than my older one."***

That's just alignment. Friction= misaligned gantry- a combination of both the screws locking the rods in the slider blocks (M4, never, ever, ever, ever, touch the M3 screws facing up or down!!!) and the rotation of the pulleys on the outer ring of shafts which aligns the central crossing rods in the center of the printer to an exact 90 and also perpendicular to the frame.

Not in this case I don't think JetGuy. The alignment on my first N2 couldn't be better. The print head moves with the same resistance from all parts of the bed and prints very nicely. Even with all the screws loose during alignment the print head moves with the same resistance -- much less freely than the new machine. Now maybe there is an issue with the frame? I have some 24 inch digital calipers and the rods measure parallel. I have not checked for perpendicularity however. So better do that. The funny thing is that the alignment of my 2nd N2 was off so much that the print head was sticking in a several places pretty badly, yet when it moved it moved very freely. The difference between the two is rather drastic.
- John

Regarding your statement -"For open source, we haven't promised open source before."

The published Raise3D kickstarter brochure implies that the printer is open source. i.e. "We will publish our APIs and toolchains after the Kickstarter campaign’s conclusion". 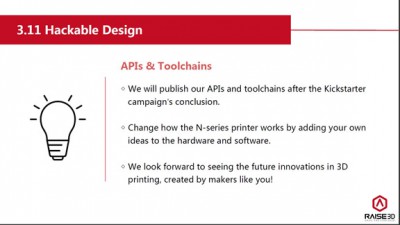 I and a number of other Raisers on the forum have been waiting for these items to be released. In fact this was one of the reasons I chose the N2 over your competitor's printer. Are you now stating that Raise3d have changed their policy? If so this is very disappointing and the publicity material of your kickstarter campaign was misleading.

Regarding your statement -"For open source, we haven't promised open source before."

The published Raise3D kickstarter brochure implies that the printer is open source. i.e. "We will publish our APIs and toolchains after the Kickstarter campaign’s conclusion".

I and a number of other Raisers on the forum have been waiting for these items to be released. In fact this was one of the reasons I chose the N2 over your competitor's printer. Are you now stating that Raise3d have changed their policy? If so this is very disappointing and the publicity material of your kickstarter campaign was misleading.

The Toolchain is almost done. If you have requirement for it, please make contact with us via e-mail. Please shoot a mail to support@raise3d.com with the following information:
Name, Nationality, Serial Number of the Machine, your Usage of Toolchain.

For API, we are currently developing the API for printing operation. Will release in near future. It is on our on-going list.

Sorry about the long-time wait. The currently system's logic is a little complex, two CPUs communication, remote control, printing operation and so on. We are keeping on iterating both software.

Vicky, maybe I'm wrong in that you never used the term 'open source'. But at least there were some promises from which we could expect more than we actually got. Here are only 3 examples from KS, there are most likely more, but I didn't do a full search:

The API is I mentioned above, it is on our on-going list. We will release it in future.

About nozzle's drawing, any user would like to ask for it, can directly shoot your personal to our support mailbox. We'd like to share the nozzle drawing with our users.
Post Reply
12 posts • Page 1 of 1