Any thoughts are appreciated in advance. I hope I described it enough to be understood.
ESD-ABS 240°C (dropped to 225°C).
Bed 110°C blah blah blah.

I've been printing various materials very successfully since I received the printer. A little trial and error and I get better than expected prints (that fit our needs).

I have studied this and noticed recently that on ABS materials, the only time the print fails for me is when the solid fill (bottom layers) starts to overlap the previously printed sweep the gear slips a little - or rather, joining back up with the already printed filament -on occasion. On long overlapping sweeps, it will cause the filament to be ground up and the gear will stop feeding. As if it is having a hard time push out filament. This is a mild concern as I need to be able to leave the printer at these points. My temp for failures I notice is to pause the print and reload, which works when I can.

A quick resolve which doesn't stop the grinding completely, but seems to have abated the complete filament slippage is to drop the temp to 225°C, and lower the Flow Rate.

I know I know, I am printing ABS with RAFT - and I am printing glued on the BuildTak as well (we have successful prints)...
-SCC
“One man's "magic" is another man's engineering. "Supernatural" is a null word.” -R.A.Heinlein

I know you and I previously discussed and I'm 99.9% sure you are at least running the sharp tooth drive gear I linked and recommended.
That's a good upgrade and does improve grip, but alone it does not solve all the known potential shortcomings of the stock extruder feeder system.

Here's what I know:
#1 the stock feed gear can slip easier, and so upgrading is a really good cheap first fix- you did that already.
#2 The change to the Bohong brand black motors on all current shipping N series sometime last year, these motors run hotter than the kickstarter motors. This is turn also heats the entire feeder block and extruder head. Despite attempts and discussions to tell Raise 3D to adjust the factory current setting, tech support told people not to adjust and instead, for a small subset of folks who complained sent them a cork gasket to isolate the motor from the aluminum body. What a dumb idea this is, it take the one thing heatsinking heat away from the too hot motor and lets the motor get even hotter, even though it's shaft and gear still transmit the motor heat. So, printing ABS, printing with the printer enclosed, and following what Raise 3D tech support has, a whole bunch of you have hot running extruder steppers. This can soften the filament and cause it to grind easier in the feeder section. The fix that Raise 3D tech support tells you not to do, is lower the current to the stepper slightly to reduce this overheating. Yes, lowering current lowers torque, but you already grind instead of skipping steps, so motor torque is not the fault here. Lowering it, within reason, to keep temperature in check. viewtopic.php?f=4&t=2705&p=17780&hilit=hot+motor#p17780
#3 Even with a sharp tooth gear, a user can and should adjust the motor position to adjust the pinch depth of the filament by changing the distance between the drive gear and v-groove bearing. This most basic of adjustments is just not well covered in the FAQ and guides for this printer.
#4 long continuous infill extrusion for base layers (floors) and roofs are know to be one of the most challenging tasks for any extruder. It's simply a natural thing that sustained extrusion, this is pushing the system to the max. The second part is, first layer has a slowdown feed rate modifier, and second layers and beyond run at the infill speed. So you might be seeing your slowed down first layer- the feeder system is within it's speed limits. You get into faster sustained rates- then you find the breaking point.
#5 There is a reason many folks upgrade to the Bondtech. In fact, it's standard on the Pro2 series, so even Raise 3D finally figured this one out.

Your input is invaluable - thank you.
-SCC
“One man's "magic" is another man's engineering. "Supernatural" is a null word.” -R.A.Heinlein

Jetguy wrote:I know you and I previously discussed and I'm 99.9% sure you are at least running the sharp tooth drive gear I linked and recommended.
That's a good upgrade and does improve grip, but alone it does not solve all the known potential shortcomings of the stock extruder feeder system.

Jetguy, to your knowledge, is the gear that you linked to in this post (viewtopic.php?f=4&t=6193&p=24902&hilit=sharp+tooth#p24902) still the best option with regard to the upgrade you are referring to?

Jetguy wrote:I know you and I previously discussed and I'm 99.9% sure you are at least running the sharp tooth drive gear I linked and recommended.
That's a good upgrade and does improve grip, but alone it does not solve all the known potential shortcomings of the stock extruder feeder system.

Jetguy, to your knowledge, is the gear that you linked to in this post (viewtopic.php?f=4&t=6193&p=24902&hilit=sharp+tooth#p24902) still the best option with regard to the upgrade you are referring to?

I ordered the one from Amazon per Jetguy's suggestion and it works very well.

To answer the concern I had about this thread, my adjusted settings fixed the overlapping print to airprint issue (subject of this thread) for the current ESD ABS I am using. 225°C with 99% flow.
-SCC
“One man's "magic" is another man's engineering. "Supernatural" is a null word.” -R.A.Heinlein

I am able to rectify the air printing caused by the overlapping of the filament being laid out by the extruder. What I am observing with the print function itself is that the settings are creating one additional pass for the filament to fill, when there is no room for it to fill.

I can say that the filament is laying out absolutely perfectly until it goes to that overlapping pass.
Here are my settings, However I sort of feel this a printer HW or FW issue.

-SCC
“One man's "magic" is another man's engineering. "Supernatural" is a null word.” -R.A.Heinlein

I hate to ask, but can you attach a sample of gcode that causes this failure? Don't need the entire file, just enough to see this overlap. I know you posted the settings file and I could slice an STL, but want to better understand the exact point of the failure. Also, a picture of that point in a failed print?

I can't share the stl... as the whole is supposed to interface with a controlled assembly. It is specifically ANY SOLID LAYER that this issue is shown. And Heat Creep is a major factor... to the gear - even though I have mitigated all the way up to not changing to bondtech... I have 5 days to print 5 days woth of print for a major goal delivery date.
-SCC
“One man's "magic" is another man's engineering. "Supernatural" is a null word.” -R.A.Heinlein

An observation: even with a Ø.4mm nozzle the best width of a single layer is about .53-.55 wide without losing the integrity of the of the structure (as if a single wall application - which I have had to use and done so successfully with small prints of PLA, ABS, CCPLA, ESD-ABS and whatever. This is aerospace quality prints and inspectors agreeing - including bed adhesion and etc.

I have concluded after a week worth of failures that it is in fact the overlapping layer issue (see images) in addition to heat creeping up the nozzle to the gear that has caused my ESD ABS material to fail. Now, the reality is that if the filament didn't forcibly overlap then the prints wouldn't fail - so long as I kept the enclosure closed (finicky ESD-ABS shrink not related to this post).

As you can see, in the image below, the great majority of the print solid layering is as it ought to be, but as soon as it spreads in the overlapping solidfill it binds up the nozzle, and spins the gear in the filament like tires in sand.

For cooling I have printed a extruder front plate to add a controlled 35mm fan:
https://www.thingiverse.com/thing:2922986

We have added an air compressor to the right extruder 5/32 tubing. Feeds right into the right filament and tube. 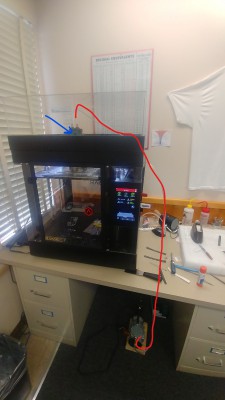 Admittedly, A lot frustrated as I have 4 days worth of printing with 4 days left to print (to meet a deadline) and after giving myself a week and a half to accomplish this, as I have been successful in every print I have produced, I am almost ready to submit a revision to print for the parts to be made out of a metal machining process.

I am now trying rectilinear solidfill as there is less overlapping in the settings.
-SCC
“One man's "magic" is another man's engineering. "Supernatural" is a null word.” -R.A.Heinlein

I've looked into my settings and can say it's amazing that the print is super nice until it creates that overlap for all layers...

I've adjusted the retraction to assist in printing getting bound. But really, I can't see anything wrong with the settings. I've shared them above.

I've adjusted the layer height from .2 to .3 and it's printing better but the overlap is still an issue.

No one at Raise3D has any response?
-SCC
“One man's "magic" is another man's engineering. "Supernatural" is a null word.” -R.A.Heinlein

This issue was not a printer issue, but rather a settings issue. The issue was that the temperature was too low for the filament. Good old user error PEBCAK.
-SCC
“One man's "magic" is another man's engineering. "Supernatural" is a null word.” -R.A.Heinlein
Post Reply
11 posts • Page 1 of 1

Users browsing this forum: No registered users and 3 guests