My printer is printing with reduced quality since more than a month now, the cause was a tangled spool that tied the print head while printing for hours over night (that PLA is quite strong, did not break fast). After that, the printer lost it's accuracy, showing ugly surfaces (horizontal and vertical) with the left side being the worst, right bad, front not good and back almost o.k.

Most problematic to me was that total lack of understanding of R3D support what I was talking about while insisting on printing more and more calibration cubes and ignoring anything I told and showed (pics, videos). Finally I had to insist on a warranty issue with a bent bearing and only addressed with some very clear speech they agreed to send me spare parts. Finally I got parts together with another order I placed (33$ shipping costs), the requested bearing was not in the package.

This week I ordered 4 of them via Amazon (15$) and asked R3D support to close that ticket (it's just complete nonsense what I got back the last 5 weeks). I don't know what's going on there, but maybe they have not enough sleep or it's just about translation issues.

But back to the issue(s), that's what happened: As the print head was tied by that tangled spool and the printer continued to print, it received huge forces against the print head. Imagine that tall head, with the (no more moving) filament at the top and the moving forces from the carriage in the middle. At every move to the right (spool holder is on the left on the N2+) the print head got a full stop for this direction, only being able to continue moving towards the inside and to the back and front, regardless what the gcode tells at that moment.

This caused the lower bearing (left/right direction if looking at the front) getting bent and that caused a play in that bearing that was remarkable (could be easily seen on the video(s) I showed support folks. Both bearings had play (can be tested by wiggeling the top of the print head left-right or back-forth) but the lower one had about 4 times of the upper one.

Right now I have pulled out the bearings and found this to be a dual issue. Actually that lower bearing is bent, but it also was not seated correctly after that accident causing about half of the play. Sadly this can happen easily because the bearings are locked with rings, but not fixed in their position. As can be seen on the pics, there is about 1mm play to get loose of the correct seat, means the carriage is too wide or the bearings too small or just some washers are missing.

The design glitches: 1. Filament feeding should not be from the side at such an angle and 2. the bearings inside the carriage need to be fixed against movement.

I will post some pics of the prints after the accident later, right now I (as a non mechanic) think about how to fix the bearings inside the carriage. 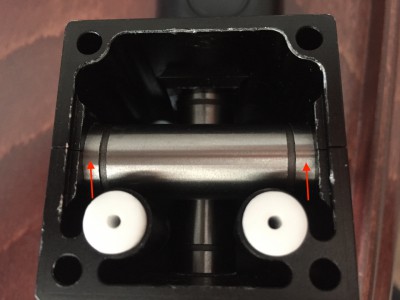 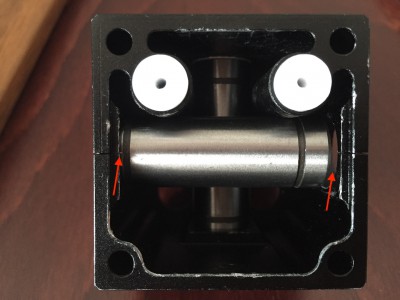 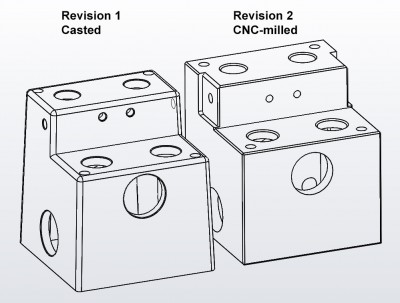 Yeh I'm wondering if the bearing went or the housing is destroyed?

Did you put filament guide tubes on the extruder? Mine whack on the cable chain but it keeps the filament from tangling.

The bearings are just fitted to the carriage, nothing to remove except the locking rings. Yes the spacer came to my mind first (nothing else after it yet). But maybe hard to find one that is an exact match (the space between the carriage and the locking ring should be closed exactly, at least less than 1mm play for both sides). Dunno if such are available readily (metal), maybe I will print them.

I have the V2 carriage.

walshlg wrote:Yeh I'm wondering if the bearing went or the housing is destroyed?

Did you put filament guide tubes on the extruder? Mine whack on the cable chain but it keeps the filament from tangling.

It's the bearing. What you see on the pics is the carrier with the new bearings fitted already. No play anymore. This way I could also test the difference between a good seated bearing and one that lost its seat.

You cannot always prevent tangled filament if you do not watch the printer continuously. Anyway it should not cause such an issue, but the way the bearings are mounted they can move. Normally I feed from above, but this day I did not.
Post Reply
5 posts • Page 1 of 1