How are your stepper motors wired?

How are your stepper motors wired?

I never looked in detail at my stepper motor wiring, as I assumed that they were of course wired to use both windings of the phase coils.
However, much to my surprise, my X and Y stepper motors were from factory wired to only use one of the windings of the phase coils, i.e. only half of the copper in the coils were actually energized!!!
The extruder and Z-axis motors are both wired to use both windings.

This made me think, was this a (single?) manufacturing mistake, or could there be any advantage whatsoever, to use only one of the windings?
The coil inductance and resistance will clearly be smaller if you only use a single winding. Could this be an advantage for the TMC2100 drivers chopper operation?
My X and Y motors are the minebea 17PM-K342B types. Even though these are marketed as bipolar motors they really have a unipolar pin-out, i.e. the phase coils have center connections that would make unipolar drive possible. Internally there are two bifilar windings for each phase coil, i.e. one winding alone can energize all of the phase poles. Actually you could quite easily modify the motor to have the two windings in parallel, resulting in half the resistance and unchanged inductance, compared to using only a single winding of the coil. This modification would require opening up the motor and rewiring the coils, but it can be done.

As I am an electronics engineer I like to make calculations, so I made the analysis below, that you can study, if interested.

The analysis clearly shows that there should only be disadvantages of using only a single winding. For the same torque, not only will the driver chopper be able to work faster, but also the power dissipation in the motor is smaller when using both windings in series.
So I must conclude that this is probably a manufacturing mistake!

Some time ago I therefore modified my motor wiring to use both windings of the phase coils. I can't say that the printer performs much better now, as it already worked well before. But, for people having problems with skipped steps (i.e. offsets in prints that are multiples of 0.8 mm in X or Y axis), I would propose to take a look at your motor wire configuration. For the same current setting in your driver, you could increase the torque a lot, if your wires happen to be misconfigured. I think the magnetic flux (and the torque) isn't fully proportional to the current, as there is likely to be some soft saturation in the iron, but the increase in torque is noticeable.
It would interest me to know if my printer is the only one misconfigured to use only one winding, or it is generally applied???

In my motor, connector positions 2,3 and 4,5 were populated from the factory. This photo shows a motor connector after the change I made. Both X and Y motors were modified. 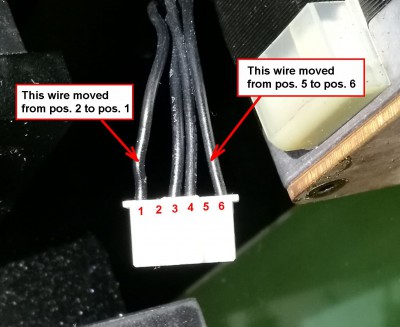 Re: How are your stepper motors wired?

I confirm,on my unit all coil are well connected as it should be
Post Reply
2 posts • Page 1 of 1