I used a 4.7K resistor on the arduino and a beta of 3950. In point 4 you suggest that the thermistor wires might not be in contact with the heat bed. Is it likely that I would achieve the same results from both thermistors if one, or both were not in proper contact with the heat bed? Remember I also confirmed these reading with an infrared thermometer, albeit with a 2 deg discrepancy, but close enough I think.
Following my initial tests and before submitted any posts I concluded that I could modify the circuit of the Raise3D system, so that the panel returned the correct temperature at 110 DegC. I did this by adding a 10K resistor in parallel with the existing 10K resistor of the Rasie3D thermistor circuit. This was far from ideal because at the lower temperatures the panel was reading 7 deg C when the room temperature was 23 degC. I was not concerned about this because I was looking for the temperatures to converge at 110 deg C. I set the panel to 110 deg C but it would not rise above 108 deg C. It was stuck at 108 deg C. My readings showed 105 deg C. These values were close enough to those I had calculated but clearly the heat bed would not rise above 105 deg C. Not satisfactory but at least I now have a look-up table that I use to compare the Raise3D panel readings with those that I require and of course I can now achieve a maximum 105 degC whereas prior to my modification, I could only achieve a maximum of 96 degC.

I wouldn't trust readings from an infrared thermometer when measuring on anodized aluminium (top side of aluminum bed).
Did you compensate for the surface having an emissivity below 1? The emissivity is expected to be lower than 1.0 even though there is some dye in the eloxation that will increase the emissivity a lot from the very low emissivity of pure eloxated aluminum.
If the emissivity of your surface is just a little below 1, say 0.86, and the infrared thermometer assumes it is 1.0, then you would read 96 degC when the surface temperature really is 110 °C.

Measuring on the bottom side of the heatbed would be better. The bottom side has some sort of coating of the heater traces that I would expect to have an emissivity closer to 1.0. However, there's an FR4 protective plate underneath the bed which insulates and must be removed. Otherwise you would measure the surface temperature of this plate, which might be 10 °C lower than the aluminum bed.

It bothered me that my last test using two thermistors produced different results from my previous measurements where I used a DS1820 digital thermometer and an infrared thermometer. So I repeated my tests with a thermistor taped to the top of the heat bed. I'm not sure why my previous results showed a difference from my first tests but I think I was probably using the wrong variables in the Arduino code. The thermistor I used in this test is the one shown in this table with a 9.92k pull up resistor.
I have added my previous result obtained with the DS1820 digital sensor. Note: There is no significant difference between all 3 different methods I have used to obtain the temperature of the top plate. So yet again I conclude that the reading obtained by the raise 3D panel are in error, up to 14% at the highest temperature.

The new results are shown in the attachment.

I don't think there is any electronic error with the Raise 3d system or the thermistor. But please consider the following.

I know that the thermistor fitted to the Raise 3D panel is 100k with a 10k pull up resistor (measured). The support team from Raise3D described the thermistor as NTC 0850, 100koHms but they did not supply the beta value.

I actually believe that is exactly what is fitted for the following reason.

Now consider the possibility that the beta value used in the Raise 3D panel is incorrect. The graph in one of my attachments shows the output voltage for two thermistors with very similar descriptions (one ends in XT, the other MT) but one has a beta of 3950 and the other has a beta of 4100. Note : When one returns 110 degC at 2.0volts the other returns 97 degC at 2.0 volts. This is almost identical to the error in the Raise 3D panel that I have measured.
So again that suggests to me that either the wrong thermistor is fitted or the wrong beta value is used in the Raise3D software. I'm thinking the software is more likely to be the problem.

I have also attached an image of the thermistor taped to the heat-bed with Plumbers Blue tape. 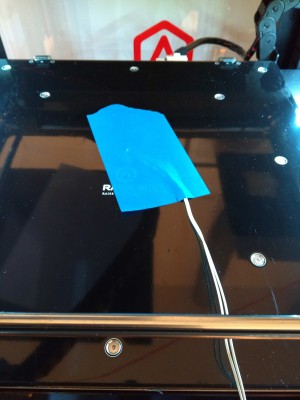 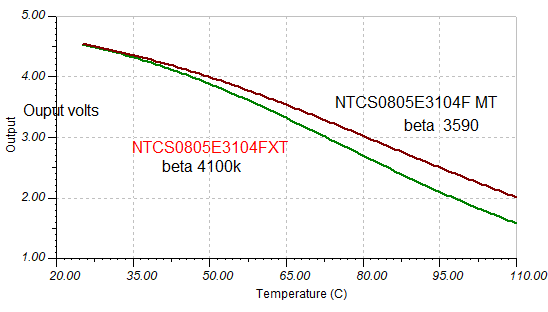 Just to add that I took the infrared measurements from the blue tape where I believe emissivity should not be a problem.

I have done it again, attached the wrong file, Please ignore the attachement 'Heat bed test with thermistor-26-12-2017.ods' in previous post The correct one is attached here.