I'm made this for my own fun but if others are interested in the part let me know. 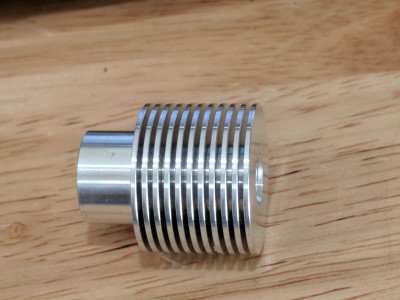 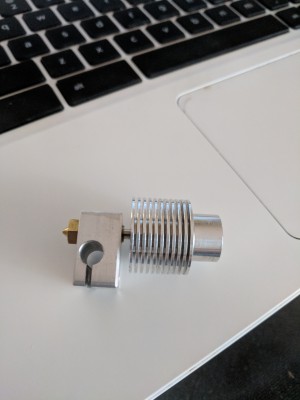 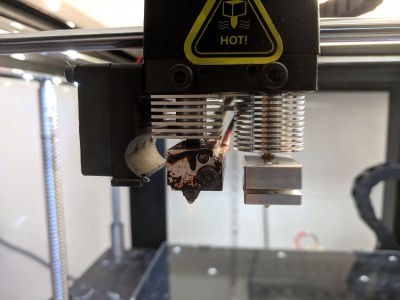 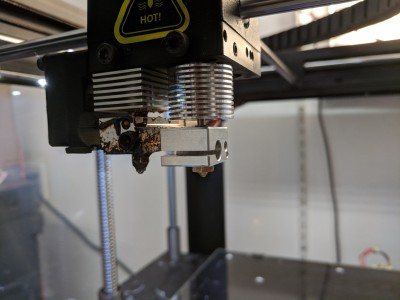 I like and approve of this so very much so.
What's your price for two of these adaptors?
And where are you (for shipping purposes)?
Using these and the e3d cooling fan allows the side mounted fans to be redone into part cooling fans..
And e3d hot end parts are everywhere. Raise3d components (as a Canadian) are difficult to acquire due to customs.

At the moment it is expensive due to small volume for example this one in the photos cost 100usd because i only needed two.
On the samples i cut the flats by hand with a file but have added these to the drawing for the next time i order one.
Not sure why the tool head is designed to need the flats on the cold end as the indexing/rotational position they provide is not required as best as i can tell and just adds cost.
If we can get a group to buy a larger volume the price will drop considerably.

sylus, i'm not ignoring you, I am not authorized to respond to PMs yet.

How about this, If you're interested in one of these please leave a response on this form.
This way we dont clogs up the forum with replies.
https://goo.gl/forms/NTXAv5m4E8TuURqk2

I'm interested, but that form you linked has a permissions issue?

The only spare parts I can get for raise3d hot ends are $80 us and that's with the junk brass nozzle that I can't use (always rubbing abrasives). So your custom e3d adapter at $100 per unit isn't so much more cost that it's frightening.
I'm in for 2.
And I really like the idea of gaining proper part cooling fans on my n2, this will go a long way to achieve that.
Jetguy is correct, the link for the group you posted is access denied

I do want to give a counter flipside to this. I know there are people who swear by the genuine E3D V6 thermal design (heatbreak AKA thermal barrier, heatsink, and heaterblock). I recently went through a battle attempting to print a huge 3D part (just happens to be a supercapacitor stacking/mounting tray for this huge energy bank project some members of my local makerspace was working on. I'm one of the very few people in the area with a custom printer large enough for this tray. Since we wanted some temperature durability and this printer isn't enclosed, it's cooling off temp wise with the weather, printing in ABS or other materials was not likely to work well on such a huge part. I know you are going what does this have to do with anything right now? My point is, this is a prototype custom 3D printer I have been experimenting with using Raise 3D N series electronics and firmware, it has a Bondtech BMG single extruder feeder and uses a genuine E3D V6 (all bought from Filastruder in GA). The why here is that jammed now on me about 10 times- every time with MakerGeeks Raptor PLA. In every case, it jammed in the thermal barrier tube and was a royal pain in the neck to clear: have to remove from the heatsink, heat the block and thermal barrier, push using the supplied raise 3D metal clearing rod into the entrance of the thermal barrier, extrude some Esun cleaning filament through it to ensure I get all the bits stuck to the walls, and then maybe try again. At the same time while typing this, my N2 with a genuine stock V2 hotend just completed a 20+ hour print in Raptor PLA like it was nothing. Again, both machines have Bondtech feeders, the code is the same, the main difference here is one has a V2 and one has an E3D v6 and that E3D and Raptor did and do no seem to play well. Exactly opposite, the V2 just seems to work well for me.

Now absolutely, this is one example, it's not your custom heatsink, and who knows if it's the 2 rolls of Raptor I just happened to try have an issue (oversized filament "bulges" from manufacturing) or other defect (something up with that E3D v6 hotend or setup). Being the person that came up with the thermal runaway mod- I know the temps are stable in this rig and have rebuilt the entire hotend several times over with brand new parts (new nozzle, thermal barrier) and yet just have seen some crazy jams with Raptor.

So on one hand, I absolutely support experimentation and alternative adaptation of parts and extruders. There are hundreds of ways to build an extruder hotend and dozens of theories of operation. Some work, some don't, some work well for some things and bad for others.

For me right now, a Raise 3D v2 hotend seems to work better than genuine E3D v6- at least in this thermal barrier jam. There are a lot of variable here so it's just a single data point, don't weigh heavily and think I'm saying this mod is good or bad. We simply need time and multiple users testing with different filaments and even then that's a lot of not even pseudo science.

I will say this about both:
The V2 Raise 3D and it's 4mm threaded throat might work well thermally, but mechanical and abuse wise, I'm willing to call it a place that folks can and do break from time to time. This is where the E3D V6 I feel has a strength and user durability factor
The V2 does not have a lot of aftermarket or 3rd party parts and you have to get it from Raise 3D. E3D has all kinds of 3rd party parts and custom coated thermal barriers. Heck, they too are releasing a titanium based version. They also have a new copper block. Finally, the extra kicker is they also have a nice thermocouple sensor that works with the Raise 3D firmware and breakout with no changes.
The Raise 3D heater block does not have a factory cover or sock yet. E3D has a very nice silicone molded sock and they work great and are cheap enough should you need to replace one.

So again, in my head, a lot of pros with this setup. That's absolutely why I am behind it, definitely want to buy one, try it and share and post setup tips and general experience. It could be the next upgrade that makes a lot of sense. I'm just throwing some caution based on a recent experience with also a genuine E3D V6 and a filament I really like to use often. Maybe there is no correlation, maybe it's just me and my setup.

Jetguy wrote:I'm interested, but that form you linked has a permissions issue?
Restricted.jpg

thanks for bringing this to my attention.
should be fixed now.

For those who are interested, I'm negotiating with my preferred shop for the first batch.
I'll update with a cost once I have the deal finalized. 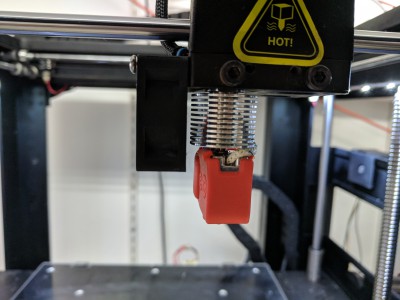 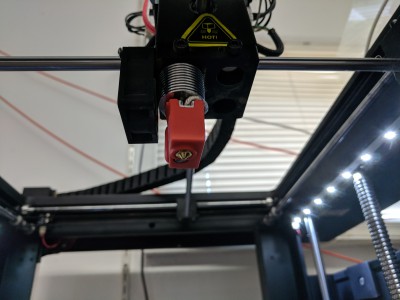 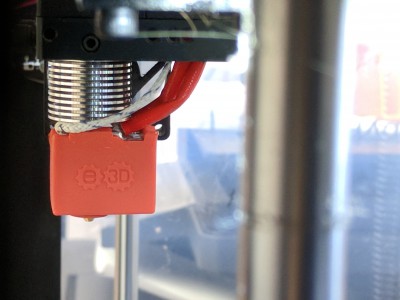 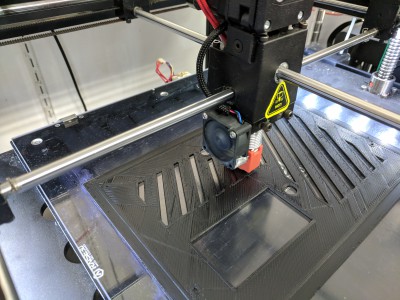 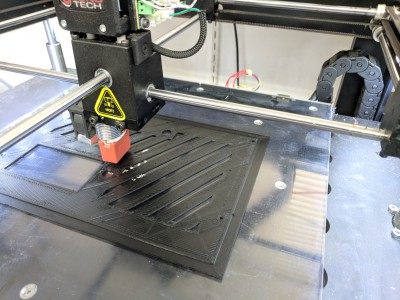 my question is, is there for just an adaptor or for a fully adapted E3D v6?

It would seem to me that you would want to replace the heater cartridge because the current one would stick out too much.

I can admit that I would be interested if only for the ability to have the silicone socks. better part cooling could also be done with custom parts. the E3D having the fan attach to the coldend rather then the print head would allow for a number of customized options including auto leveling upgrades. I'll have to gather some money for printer upgrades now though.

currently I already need to replace one of my hotends anyways as I can't trust it after the thermal runaway that happened to it.
RL name: Michael Nolen
printers:
raise3D N2 kickstarter Early Bird
Trinus Deluxe (running smoothieware on Azteeg X5 GT board)
Monoprice Maker Select v2

[quote="firesped"]my question is, is there for just an adaptor or for a fully adapted E3D v6?
This is for the aluminum Heat sink only.
all other parts can be bought from any of the many sites selling E3D components. eg. thermal barrier, heater block, 24v cartridge heater, thermocoupler

I have 7 response on the form interested for as many as 14 units.
First batch pricing is $34.00USD/piece
Ill send an email to the folks on the form to confirm interest and arrange purchases.

One of the new abilities this adaptor will allow is to use PTFE lined heat breaks for those stubborn materials that need more retraction but jam on full metal hotends.

Do you have a deadline for orders? Would you ship to the EU and at which rates (a rough estimate would be sufficient)?

socke wrote:Do you have a deadline for orders? Would you ship to the EU and at which rates (a rough estimate would be sufficient)?

throw your email on the form so i can email you and get your shipping information.

Which heater cartridge do we need? I know it is 24v but the 30watt or the 40watt?

Is the premium heater one to be looked at?