Asking for a friend.

#1 provided you plugged it in oriented correctly so as to not literally blow up the mainboard and every single other stepper driver also plugged in, then the next fault would be
#2 the factory XY drivers just so happen to reverse the polarity or direction of the stepper motor compared to typical A4988 drivers. Meaning- the axis would move in the incorrect direction and also- given microstepping is different- also move at the incorrect speed and distance.
#3 Given the axis limited switches are ONLY at the min end of the axis, and now the motor is going the wrong direction during the homing sequence and rams into the max end of the axis with no limit switch.......

In other words, in a pinch, in extreme need of getting a printer working, with the above knowledge, one could make an A4988 work- it's just a standardized stepper socket,standard interface, however, one would have to set the switches under the stepper socket to set the plugged in driver to the correct microstepping, and then due to the wiring difference, the wiring in the stepper motor harness plug would have to be changed, or custom firmware from the source code could also reverse stepper direction, and likely, a change in steps per mm in the control panel may be required to correct for that difference too. So can it be done? Sure, heck, I built custom printers using Raise 3D mainboards. But it requires a lot of background knowledge and adjustments.

As to the why plugging in a stepper driver backwards matters:
The socket is not polarized or keyed in any way to prevent this mistake. It can be plugged in both orientations or even plugged in shifted off the pins. It's just 2 rows of pins.
The socket contains both logic 5V level pins and 24v power pins. Reversing the stepper driver in the socket places the 24V across other pins, and when the power is applied, the chip blows while also sending the 24V into the 5V logic of the mainboard and that then blows everything else in an instant. No fuse could ever protect against such a mistake. Don't totally blame Raise for this- they followed the industry standard (both an advantage for alternate stepper driver compatibility, but also a massive risk for users to make costly mistakes).

Many thanks for your replies Jetguy. Reason I ask is because I've been having layer shift issues (see: https://forum.raise3d.com/viewtopic.php?f=2&t=20165) and was advised that the issue could be due to the stepper driver boards. I bought two new X/Y ones, but when they arrived I noticed they were visually different - below are the two new boards: 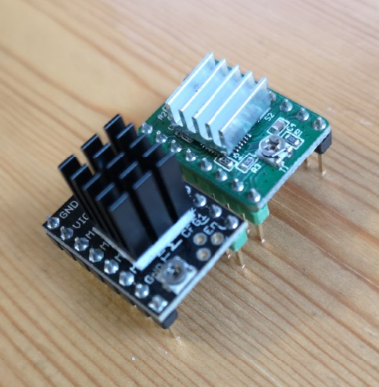 I checked the part numbers on the bags and both were identical, so I figured it was a board design change and plugged them in. I noted the voltage adjuster screw position is opposite to that on the other stepper drivers and fitted the new boards in the same orientation as the old ones. When I switched the printer on, I was greeted with the following error: 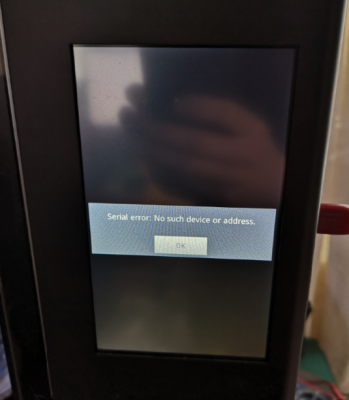 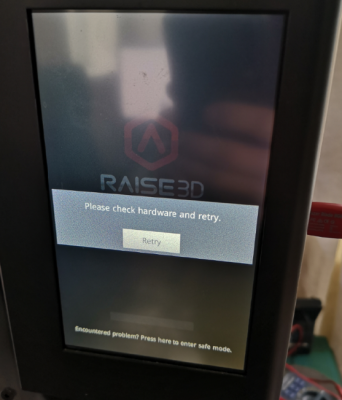 I've checked leads in case I've accidentally disturbed something and replaced the USB from screen to main board with a known good one as I read this could cause that error, but to no avail. The supplier that I bought the driver boards from has apparently escalated it to Raise, but I figured it wouldn't hurt to ask on here as well. Machine is an N2 by the way.

Typically, I have a rapidly approaching deadline and if I can't find a solution in the next couple of working days I'm going to have to sub-contract the work, which I really don't want to do unless absolutely necessary.

Too late. You likely just smoked the entire board and all stepper drivers.
That's why you cannot guess what is the correct orientation. You have to KNOW beyond a shadow of doubt before powering.

Was trying to warn you before this happened...

What really bothers me is that skipping steps had NOTHING and I mean nothing to do with anything you tried.
You NEVER should have touched voltages, that was never the issue. If anything, lowering the voltage increased the likelyhood of skipped steps because you intentionally set the stepper drivers for less torque
You never should have switched drivers- that ALSO was not the issue.
When you did, you made the mistake I warned about, powered it on and in a split second cost you more money.

I don't want to see people go through this, but I also cannot be tech support for Raise when they can't or won't give you the right answers.
This was an utter failure of logic and troubleshooting before it just went to insanely bad and costly.

Jetguy wrote:... This was an utter failure of logic and troubleshooting...

Respectfully, I trust you don't mean a failure of logic on my part, as I've taken a very logical approach to solving my layer shift issue. I've changed one variable at a time, working through basics such as inspecting belts, checking couplings are tight, checking for clashes during prints, etc. each time running a print before making more changes but without success. I've read a lot of threads, always looking for multiple suggestions that the solution worked before trying it myself. Swapping boards is something that has been suggested by Raise themself to me directly and to others in the past and changing the boards completely was suggested by an official Raise distributor engineer.

Jetguy wrote:... That's why you cannot guess what is the correct orientation. You have to KNOW beyond a shadow of doubt before powering.

I didn't guess - I fitted them in the same orientation as the old ones, using the voltage adjustment screw as a reference, per the Raise official guide. I appreciate your warning, but unfortunately for me, I'd already fitted them when I posted.

Regards stepper driver voltage, the reason I altered them is in this thread: https://forum.raise3d.com/viewtopic.php?t=5268 in particular a post from Romanazzi96 toward the end, where they state it solved their layer shift issue. I also found dust on the inlet to my electronics enclosure (although the components looked reasonably clear) and so thought it reasonable to try what they had done. Again, I read multiple threads around the subject before going ahead with it. Other threads discussed lower voltage = lower torque, but I have Bondtech extruders and therefore less mass, which I understand means less torque isn't such an issue.

I mean no bad feeling with my reply - I appreciate any input relating to solving this - I'm just stating facts and doing my best to fix my problems. If you can tell me what IS my issue or suggest something else I might try then I would be very grateful indeed.

Take the stepper drivers out.

Look at the pins.

Ensure the pins names are identical to the old stepper driver.

Also ensure the pins are in the correct position.

Look at a untouched driver to be sure.

Some of these drivers have the pins the wrong way around.

Also, if they are TMC Drivers, you don't really need more than 1v on the vref.

Doesn't need to be too high. Only increase it if your missing steps.
Post Reply
9 posts • Page 1 of 1