Discussions about ideaMaker and other printing software.
Post Reply
140 posts

I have been trying to get rid of some small zits on the surface on my prints. I was hoping Lin_Advance would do that. I ran the K-Factor Calibration Pattern and with the ABS, nozzle, layer height and extrusion multiplier I use, but I still have them there. I put M900 K20 in the startup script of S3D. I also made sure I didn't have "Coast" in use. Any ideas? These little pesky zits are the only abnormality on the print and getting rid of them would make a perfect 3D print. 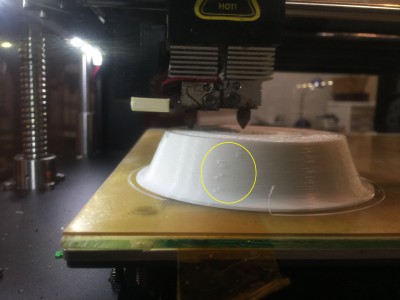 Before I installed ABH's 1.1.8 firmware, I tried various settings for Coast and Extra Restart Distance in S3D, but still could not get rid of them.
- John

Is your Outline Direction set to 'Inside-Out' or 'Outside-In'? Generally, I'm getting cleaner results with 'Inside-Out'. 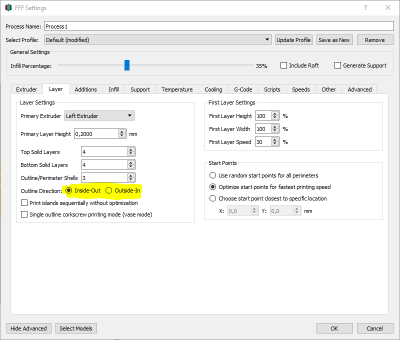 Yes, that is set on mine too. Thanks socke
- John

Yeah, I noticed that. When I run the gcode for the K-Factor Calibration Pattern, anything below 20 or above 25 is a bit of a mess on my end. The bottom rung is the "0" and each rung up is +5. I spot 20 as the best there. I ended the print at 60 as I was rerunning the print and I had already seen that the higher numbers had gotten a lot worse fast.

Did your calibration look anything like mine? Also, could you tell me what settings you are using for ABS? Maybe I'm just way off on something. 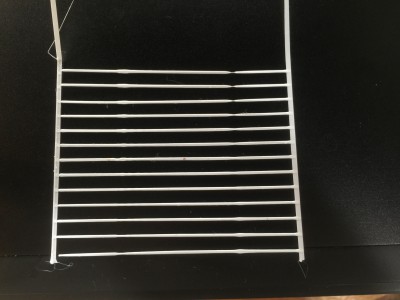 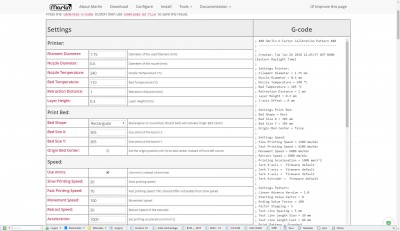 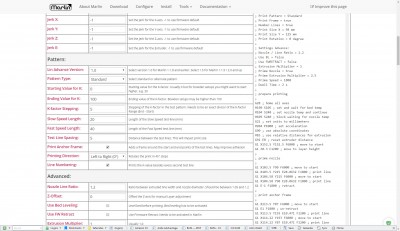 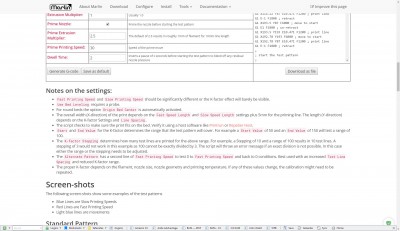 The calibration settings should correspond to the settings used for normal printing.
I am usually printing ABS at 235 C, 0.1 mm layer height, extrusion width = nozzle diam. = 0.4 mm.
I noticed you use 0.3 mm layer height, nozzle = 0.6 mm and extrusion width = 0.6 x 1.2 = 0.72 mm, so this is quite different to my normal printer settings and might be the reason for the difference.
Different brands of ABS might also require different settings, I guess. There is a reason to calibrate

I agree that for your printer settings about K=20 seems to be best.

Thanks for looking at this and getting back to me ABH.
- John

@ABH ,last Marlin 1.1x is out.Did you plan to update your firmware?Have you experienced printer stop in mid print recently with 1.1.8 and last Raisetouch firmware?

I have updated my Raise3D motion controller firmware to the latest Marlin release.

The following pre-compiled files are available:

The following feature is removed in the precompiled files:
REPRAP_DISCOUNT_FULL_GRAPHIC_SMART_CONTROLLER
Edit 13-Aug-2018: Now re-enabled in all compiled binaries.

JUNCTION_DEVIATION replaces the use of traditional jerk settings.
A fixed "junction deviation" of 0.02 mm is used.

I don't have much experience with the new features, just tested that the firmware runs on my N1 and gives nice prints.
Last edited by ABH on Sun Sep 02, 2018 2:08 pm, edited 5 times in total.

Thanks for your work on updating this. Just curious what your motivation was for dropping this since one can be used in a pinch if the Raise touchscreen fails.
RL Name: Jason Preuss Thingiverse: JMP Youtube:http://youtube.com/c/patterntoprint Website: http://www.patterntoprint.com

Thanks for your work on updating this. Just curious what your motivation was for dropping this since one can be used in a pinch if the Raise touchscreen fails.

Also, when doing high segment count curves and high res STL and resulting gcode, this is about the only way to bypass the stuttering of jamming gcode across a USB to serial interface by printing from SD card directly. More or less "the test", it prints only from SD card without stuttering, printing from the front panel over USB stutters like crazy viewtopic.php?f=8&t=6776&hilit=stuttering#p27238

As to why?
I'm just guessing, but maybe flash space was a concern?

It was removed as part of a debugging exercise. As I never use any other controllers than the RaiseTouch myself, I just happened to leave it disabled. Another reason was to avoid this unnecessary load of the MCU (I have no evidence that it makes any difference though).
I just tested that the REPRAP_DISCOUNT_FULL_GRAPHIC_SMART_CONTROLLER macro in the Configuration.h file can be set without any issues. There is no Flash size issue.
I could update the executables, if you think it matters to people, otherwise I will just leave it up to individuals to recompile themselves.

Being honest, I wish you would leave it enabled.
My testing and understanding is that the code doesn't run the LCD subroutines if no LCD is attached at boot.
So other than flash size, no reason not to enable it (again, my opinion).

Now granted, I will fully give you credit because more than once, I've seen where at compiling in the Arduino IDE, there have been errors and mistakes all depending on version of what Arduino version you used and if you had the correct libraries installed. So yes, even myself, I've disabled the LCD option in config.h in order to bypass some error messages that prevented compiling in a given IDE version. Key is, that's a user downloading the source code, taking whatever Arduino IDE they have installed on the computer and trying to compile from source. That's all just part of welcome to code, versions, and libraries, and why everyone is not yet ready to play in source code. So maybe, leave it off in source code as shared on Github, but enable in binaries you are providing?

That said, since you are providing the binaries and you know when it compiles- a total non-issue to leave it enabled.
Going further, I kind of wish the collective group would get on board and everyone gets a graphic LCD module, if for no other reason that troubleshooting. When you get the famous serial error on the Raise3D LCD, simply having and plugging in a graphic LCD into the mainboard could greatly help diagnosis of common errors and problems. That way, you know what the mainboard is doing and saying- rather than this guessing game we play far too often. BTW, all Raise3D official firmware versions (for N series only) has LCD enabled.

OK, no big deal.
I have recompiled all 6 binaries with REPRAP_DISCOUNT_FULL_GRAPHIC_SMART_CONTROLLER enabled.

I have been trying to get rid of the defects shown in the 1st post for a while so this looks like exactly what we need.

We have have a N2 Plus Single with a Bondtech and TMC2224 drivers so I downloaded the 1.1.9 version of N2 Plus Single pre-compiled firmware. Loaded the firmware, restarted the machine (just in case), then loaded the test gcode I generated using the lin_advance 1.5 option on the marlin website. The printer barely printed the purge line, print the K=0 line very well and then basically didn’t print anything else well including the numbers for each line.

Due to the issues I decided to download the 1.1.8 version of N2 Plus Single pre-compiled firmware. Loaded the firmware, restarted the machine (just in case), then loaded the test gcode I generated using the lin_advance 1.0 option on the marlin website. This time the printer printed the test pattern well and showed that K=10 was the sweet spot. Therefore I added the M900 K10 command to the start script and tried a test cube. The printer barely did the purge, then when printing was highly under extruding to the point that I was left with a cotton candy looking web of material.

Obviously I am doing something wrong but can’t figure out what it can be. I checked the extruder steps and it is still showing 415 in the touch screen so I’m not sure what else to check. Sorry I’m advance for not linking / showing my exact settings but I’m on my mobile now and don’t have access. The settings were basically the same (other than temps for PLA instead of ABS) as those posted by JohnSays since I was also using a 0.6mm nozzle.

Any ideas? When I reverted back to the latest factory firmware, the printer was back to normal.

Considering that a 0.6 mm nozzle seems to require lower K values than a 0.4 mm nozzle, I suggest you to print the calibration pattern with K from 0 to 0.2 in 0.02 steps.

If you suspect that the E-step value you have set in the RaiseTouch computer (415 for Bondtech) isn't used by the motion controller, then you can check what happens when you purge in the Utility screen. It is easy to purge 10 or 20 mm of filament and verify that this length of filament is actually "eaten" at the Bondtech inlet. Just add a small mark on the filament somewhere near the Bondtech intake and follow the mark when purging.

Great info, Thx! I suspected that I might have to edit the pattern gcode somehow but wasn’t exactly sure. Also, didn’t realize that the K value would be so small either. That’s great info to know.

I had done the extruder calibration with a 100mm extruded length on the stock firmware and 415 value was perfect. However I hadn’t tried it with the custom firmware, based on the comments I thought it would be the same. I’ll double check just to be sure it’s still accurate.

Thanks for the feedback and the custom firmware! I hope to get this working on Monday.

OK I think I have found my issue but don't understand why. I checked the extruder calibration and it was dead on at 415 steps. I then started to print a test pattern but cancelled it just as it started to print (that's a different story). Turns out it was good that I cancelled since that's when I noticed my filament mark from calibration was pushed back. When I measured it was 10mm back.

It seems that even though I set the retraction to 1mm in the test pattern it was actually retracting 10mm and this was the reason for my bad prints with version 1.1.9 firmware. I changed my pattern settings to 0.1mm retraction and I got the test pattern to print OK. Is this factor of 10 issue in the firmware? Or in my settings? Below are the original kfactor.gcode settings (which gave 10mm retraction) from the gcode file.

ABH, a quick check on this please. Ever since I installed the last version of your firmware mods for my N2 dual, I had been getting the following error code below. I don't get it at all with the factory firmware. (I run the filament runout sensor version.) Does your latest version fix the problem? 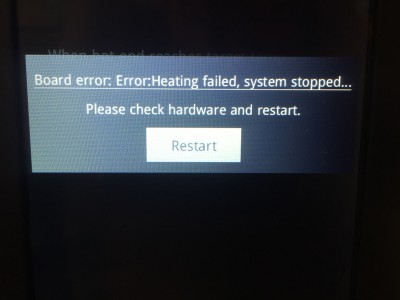 I installed the N2+ dual rev 1.1.9 last night and didn't have any issues. It also interestingly resolved my 10mm vs 1mm retraction issue as well.
Post Reply
140 posts