Discussions about ideaMaker and other printing software.
Post Reply
6 posts • Page 1 of 1

It think there's a but with z-hop at beginning of new layer.
It moves nozzle up, then down, and then moves to layer start point.
example:

If forgot to write, that I think it's in wrong order and should be:
1. move up
2. move to layer start point
3. move down.

Which option have you selected at Z Hop performed?
If it is selected as Only from Models to Supports, it should move up first then move to the layer start point then move down.

I have step z-hop for all. But it does not matter.

The way it behaves now is a bug.
It either should be in different order, as I mentioned: up, travel, down, or not performed at all, as now it just a useless up/down moves that doesn't have any purpose.

I believe we only use the logic of move up then down then travel for Z hop during a layer change. Z hop at other solid fills, it will complete the travel first then move the nozzle down as the gcodes in the picture below. 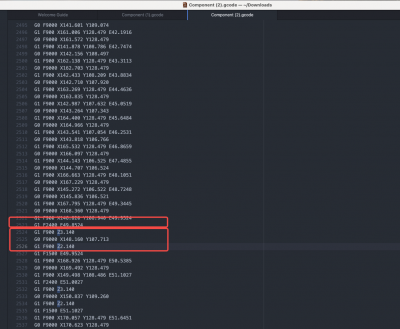 And during a layer change, the Z will move up first then move down to Layer 1 which is the next layer instead of the layer just completed printing. So moving down first then travel shouldnt affect the print result. But if you see the logic is actual affecting the print result, feel free to share us pictures and videos of the issue.
Post Reply
6 posts • Page 1 of 1