Discussions about ideaMaker and other printing software.
Post Reply
20 posts • Page 1 of 1

Is there a way to set the location of the Origin Corner?
Two of my printers have their home (origin) position in the right rear.
The other one is standard front-left.
Having it display correctly without having to remember to rotate the print box around really help orient the object for printing.
Thanks!

You mean setting the origin point to the right rear corner and everything on left and front are all negative value?
Do you have any working gcode file can share with us?

No, it puts the origin (home) at the right-rear and sets the X+ to the left, Y+ forward. It doesn't change the gCode. It changes the display to reflect the positive direction of the X and Y axis that the printer moves.
I the attachment, you can see the setting in Simplify3D that does this and the resultant orientation of the Print Origin for this printer.
These printers have their Print Origin and Home at the right-rear, and move X+ (positive direction) to the left (instead of standard right), and Y+ (positive direction) to the front (instead of the standard backward).
Having the build plate origin in IdeaMaker correctly reflect the origin position of the printer helps properly align parts for the best cooling and build sequencing.
Hope this helps.

Thanks for your feedbacks. We will add this request into developing list.

I'd also like to add that I need the setting to invert an axis, in my case, the Y-Axis.

It would help significantly in using my new belt printer, the Creality CR-30 PrintMill.

Which by the way works perfectly in IdeaMaker 4.1.1 on macOS Big Sur on a M1 MacBook Air.

Would you like to advise more details about the Belt Printer Invert Y?

Printing on the belt printer starts at the farthest point of what is the Y axis on a normal printer and in the slicer.

For each layer the belt moves forward by 1.41 * layer height.

So the slice preview should start with layer 1 in the front of the print area and expand to the back for the following layers.

But it expands forward as you can see in the attached pictures. This is irritating.

Also the model should be automatically placed as close to the front of the print area on screen, not in the middle in the Y direction as with normal printers. 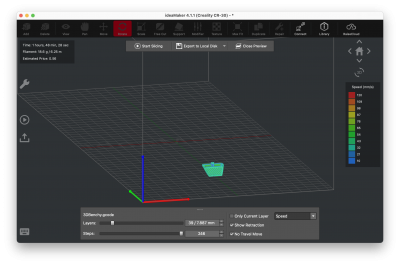 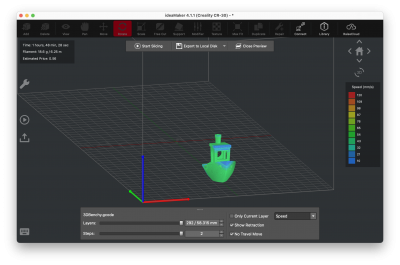 In the following paragraphs I refer to the lowest position on Y and Z as 0, even if it rather is the layer height, just for better readability.

The settings for the first layer in the tab "Speed", "First Layer Speed" and "Slow Down First Few Layers", don't work for the belt printer, because a belt printers first layer is not at Z=0 but at Y=0.

Also in "Layer" all the options under "First Layer Settings" only apply to the very first printed line (or vertical wall) along the X-axis which is at Z=0, but for a belt printer this also has to be at Y=0.

The "Platform Additions" Raft / Skirt and Brim also don't work at all for the same reason: referring to the wrong axis.

The current but 3 years old default slicer for belt printers "CrealityBelt" (aka BlackBelt, a Cura 3.6.0 OEM) has the option to treat the „walls“ touching the belt separately which fixes exactly that problem. But this is just a hack because the belt printer handling there is done by a plugin. But this old software doesn't work anymore on the current macOS 11 Big Sur of my main computer, so I wanted to use IdeaMaker for my new Creality CR-30 PrintMill, as I don't want to be forced to use a Windows laptop just for that...

Maybe you could integrate this properly by switching your already available first layer functions from Z=0 to Y=0 when the option "Belt Printer" is activated in "Printer Settings / Advanced".

Belt printer normally starts from the rearest corner of Y axis according to how belt is rolloing. So from visual preview, the squential should be fine.

My Creality CR-30 PrintMill and all the other consumer belt printers I've ever seen work this way:

For reference: the observation point (the user) is in front of the printer.

The X axis is also inverted compared to most cartesic 3D printers: X=0 is on the right side.

The printed object moves toward the front of the printer with each new layer on the Z axis.
So the next printed layer is located behind the previous one, compared to above it on a normal 3D printer.
This is the only way to print at a 45 degree angle.

In the IdeaMaker preview the new layers are added toward the front of the printer as the object is built.
This is irritating because it's the opposite direction to what I described above and what can be observed in reality.
On a bellt printer it is not the printhead that is moving along the Z axis but the printed object, like in any Makerbot or Core XY 3D printer.

Furthermore there's only one single line at Z=0.
The height of the object can only increase by moving it toward the front of the printer by increasing the Z position.
So for the "First Layer Optimizations" you have to take Y=0 as reference, not Z=0.

Please see the attached pictures, the perspective in the screenshots is the same as in the photos.

PS: Because of the inversion in the X and Y axis the imported object had to be rotated 180 degrees around the vertical axis so that the vertical wall parallel to the X axis is printed first which is the orientation the object has been constructed in. 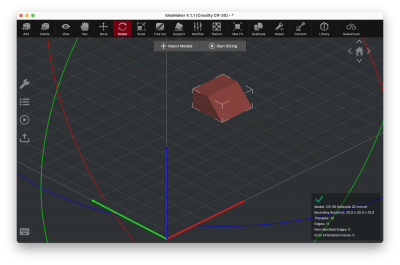 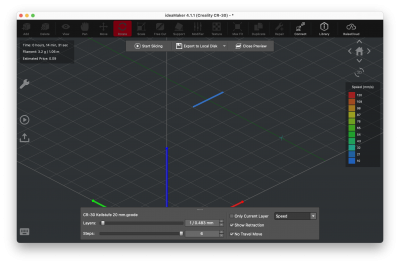 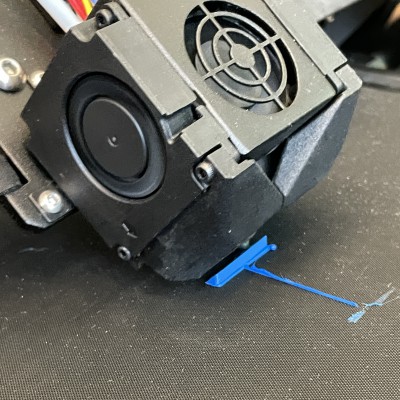 Here you can also see that the "First Layer Optimizations" don't work: the belt adhesion was so bad that the print is partially detached from the belt because the first layer (Y=0) was printed much too fast using the "Outer Shell Speed". 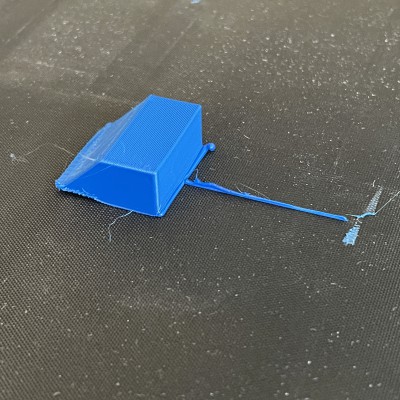 The side of model close to the belt should use belt wall settings to adjust value.

Which Belt Wall Settings? Where are those?

The only belt printer setting I can find in my IdeaMaker 4.1.1 on macOS Big Sur is in Printer Settings / Advanced the toggle on the bottom left and the field to enter the angle next to it.

Oh great, I found them: hidden behind the plus sign in the "Prepare to Slice" window...

...but there's no tab for them in the advanced settings when I edit a template. 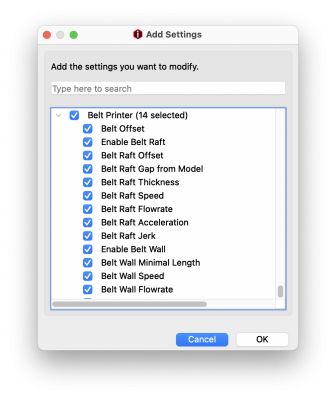 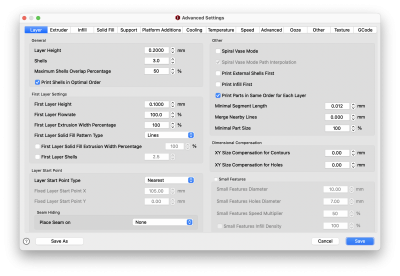 The belt offset controls the gap between model to the belt. If it is too small, the model will be too close to the belt.

Belt printer has 45 degree angle. The first layer is not the layer by the belt.

DaHai8 wrote:Is there a way to set the location of the Origin Corner?
Two of my printers have their home (origin) position in the right rear.
The other one is standard front-left.
Having it display correctly without having to remember to rotate the print box around really help orient the object for printing.
Thanks!

Thanks,
Mark A. Mace

Are you looking for Invert Y axis feature?
Post Reply
20 posts • Page 1 of 1