Discussions about ideaMaker and other printing software.
Post Reply
17 posts • Page 1 of 1

Hi all, not sure this is the proper place/way to report a problem, new user here sorry if I'm breaking some rules.

When I'm printing a thin-walled cylinder I'm experiencing an issue where the end of the perimeter line is missing. 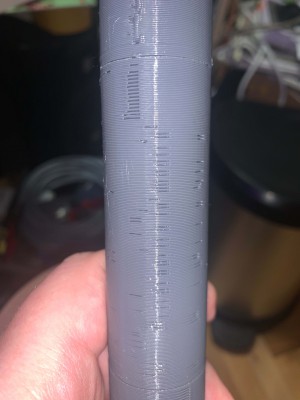 issue is gone if I disable "Gap Filling". I tried number of different values here but every time I have this issue:

(slicing from other slicers did not present this issue)

Maybe check and see that this is set to 0:

Leo wrote:Maybe check and see that this is set to 0:
Coasting.jpg

I have both coasting and wipe set to 0

Would you like to share you .gcode and .data files with us? And also settings from other slicing softwares so that we can compare.

@arhi: Maybe you would like to compare my settings:

Vicky@Raise3D wrote:Would you like to share you .gcode and .data files with us? And also settings from other slicing softwares so that we can compare.

I'm sorry, new on the forum so posts need to be approved (takes time) and I'm not receiving any notifications via email so...

I uploaded .idea isn't that file containing all the configurations and objects and.. ?

I also uploaded the STL.

I can upload anything else you find useful.

Leo wrote:Maybe you would like to compare my settings

I'll try thanks. Any way to easily "compare" so I can see the differences or I need to switch between the two and hope I remembered what was set in previous one?

When I disable "gap filling", as I wrote in original post, the problem does not exist (took me number of prints to figure that ou

).
Yes, wall of the cylinder it thin and nozzle is big. But look at the slice you exported. Those are 2 concentric circles. Lot of segments so pretty smooth. How can it fill in those few places and not the whole hole? I'd understood if the space between outside and inside perimeter is empty, I'd understand if it's all full. I don't get what's happening here?! 10% width on the curve ain't gonna happen with petg and e3d hotend with .6mm nozzle

What's also unclear, this is "gap filling", this is place between outside and inside perimeter. Why is it messing up my outside perimeter?!

Thanks for the help

, I'm still not too experienced with IM, I moved from s3d to IM some ~10 months ago and never had any issues so far, this is the first time I had an issue I could not easily solve so registered on the forum

Model is built with multiple triangles which means curves are also built up with multiple segments. So the width for each section won't be the same with each other. For the narrow sections, lowering Minimal Width will help.

Of course, but while "hole between perimeters" (inner perimeter, since I'm not printing with only one perimeter) is varying, not the perimeter itself.

Vicky@Raise3D wrote:So the width for each section won't be the same with each other. For the narrow sections, lowering Minimal Width will help.

Well "after the print" I have number of ways to tackle the problem (in this case, just ignore it as parts did not need to look nice) but before the print, during slicing, there's nothing showing me I'm going to have a problem. The preview shows outside perimeter closing the loop properly.

I'm trying to figure out what's happening here. Is IM trying to print perimeter with reduced extrusion rate and my extruder + hotend just did not manage to "draw that line" and I got short, or IM actually stopped extruding before end of line (or I'm mistaken and these are beginnings of the perimeter in error and not ends)?

However I look at it, there was no reason the mess up outside perimeter and it seems like a bug to me. I see 3.6.1 have some changes wrt perimeter gap so I'll try to reslice this tomorrow with 3.6.1

With Cross Section and Wireframe enabled, you can see the thickness of perimeters are always the same. The start point and the end point of each segment may fall onto different segments on the other side causing the thickness change. 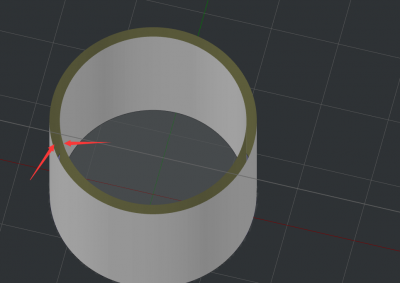 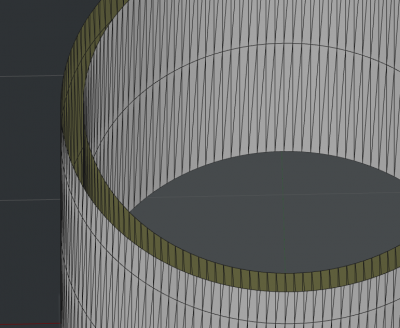 Sorry, I think I'm not explaining myself properly (English is my 6th language so apologies for not doing it properly, not trying to be "smarta$%#@").

If we look at the single slice: 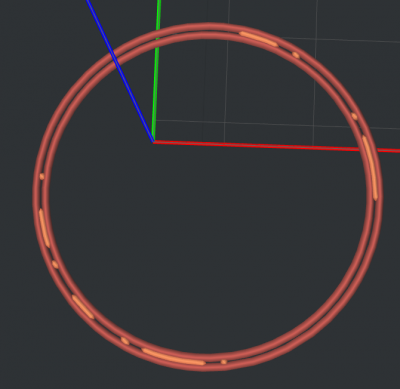 The "red" perimeter (external ones, one outside of the cylinder and one inside of the cylinder) are printed 100% flow rate, right?
The"orange" perimeter (internal perimeter, this was sliced with few perimeters so there's no infill here only perimeters) is printed "weirdly"; I'd assume if the fill-gap is enabled to see here a full orange circle printed at lower flow rate. The "lower flow rate" is not happening 'cause I do not allow flow rate to go below 80% (or 50% originally don't remember).

If I allow very low flow rate % then I'd get what I expect: 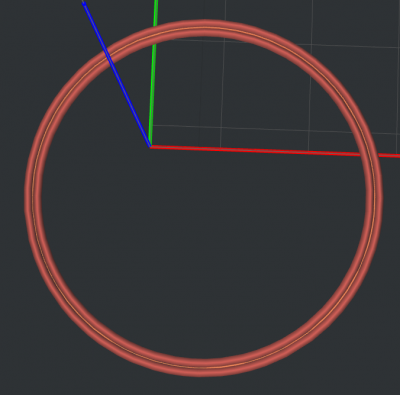 And that part is clear. It is understandable that ideaMaker cannot do miracles and fit a third "line" between those external perimeters as there's just no room for it if I don't allow low extrusion % to actually "make" that line. But what I don't understand and what the whole problem is that I'm trying to solve, is that, while looking ok at g-code preview (except the preview issue that it ignores global offset) the cylinder will print ok looking from outside: 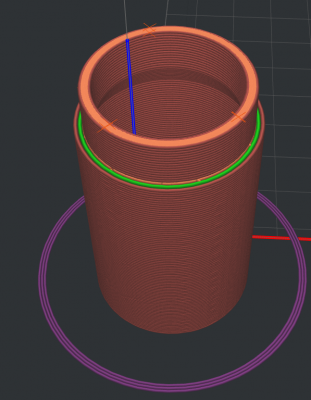 when I print it external, outside, perimerimeter has holes. 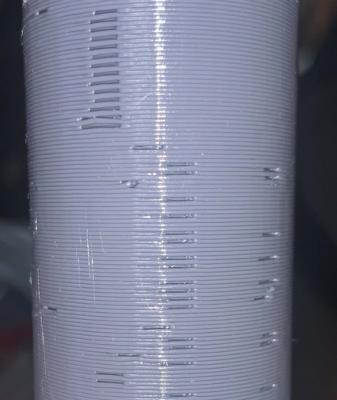 I cannot explain these holes by "not enough space between two perimeters". If the width of the cylinder wall was smaller than 1.4mm so that 2 perimeters can't fit, I'd understand, bit is not, and preview clearly show both perimeters... I can't understand where these holes come from ?!?!?!

Looking at the print, I can see that all lines start at the same position, but the place they stop is not "identical", it vary a bit. It looks like too big coasting, but with huge coasting it would make holes like this only all the holes would be same size.

I'm doing more testing now (with 3.6.1) and I recorded the print to analyze. Looks like my original analysis was wrong! The holes do not happen at the end of the move but at the beginning of the move?!?!?! It seems that either something happens before the start that drains the nozzle (retraction?! but this happens without retraction too) or the move starts without proper extrusion...

Can you zip the files? I can't open 7z endings.

@leo https://www.7-zip.org/ it's open source, much better compression than .zip
here's the .zip too

This is confusing ... g-code ends the previous layer, does 0.1mm retraction (like it does in prints where there are no holes), lift up, move to begining of new layer, prime 0.1mm (like it does on prints without holes) and start printing perimeter... and first (or first few) segments are not printed as nozzle is empty... but why is nozzle empty?!?!?! 0.1mm retraction should not be an issue, is not an issue on other prints...

In my opinion the slicer is slicing the object correctly. My tests have also shown no issues.
I also looked at your G-code using Repetier-Host and couldn't see any anomalies.
Have you tried to turn off retraction altogether?
Have tried infill set to 0 so that only outer and inner walls are printed and the printed head does not have to much across the object?
I see you are using an Ender 5 or something similar that is probably configured with Marlin. I might be wrong.
Maybe head over to an Ender 5 forum or face book group and see if they come up with an answer.
I for one don't have an answer for you.

Leo wrote:In my opinion the slicer is slicing the object correctly. My tests have also shown no issues.

I'm inspecting it manually and with craftware (imo best g-code viewer out there) and I don't see anomalies but when I try to print, you seen the video..

Leo wrote:Have you tried to turn off retraction altogether?

first thing I did was turn off Pressure Advance as I assumed that was the problem as pressure advance will reduce flow at the end of the move to relieve the pressure and I assumed this was end of the move "hole". Then I disabled retractions and coasting completely. So PA off, retractions off, coasting off -> zero changes. Then I turn off this "gap fill" and everything printed ok.

At this point im pretty sure it's not slicer's problem but something else. The g-code looks ok, but for some reason, unknown to me, the nozzle is empty at the beginning of the first line on each layer. Something happens during the gap filling move that drains the nozzle.

Leo wrote:Have tried infill set to 0 so that only outer and inner walls are printed and the printed head does not have to much across the object?

I tried many things, don't know if I tried that one. It should not matter as no infill is being printed here, only perimeters.

Leo wrote:I see you are using an Ender 5 that is probably configured with Marlin.

the "frame" of the printer is Ender5 so I call it Ender5 but except for the 2020 extrusions there's nothing left from creality there. New motors, new belts, new lead screw, linear rail on the X, direct driver BMG extruder pushing filament in to E3DV6 hotend, all that controlled by RepRapFirmare running on Duet2Ethernet. So no Marlin there. Nor it really has anything to do with Ender5 (no bowden, no MK10, no...)

Nozzle is .6mm and PETG is "pully" so if you try to stretch it, PETG can "pull the plastic out of the nozzle" and maybe that's what's happening. During the gap filling I think it's stretching the filament so it pulls it out of the nozzle and the nozzle is empty so 0.1mm prime that happens before the layer start is not enough. It would probbly work ok with smaller nozzle or PLA.

I doubt there will be any help there as this machine is too far away from Ender as I mentioned. I did start the same thread on duet forum as originally I assumed this is pressure advance issue but it's behaving same with PA disabled

Anyhow I reproduced same behavior (other object and other configuration) with simplify3d .. cannot get the same behavior from cura/slic3r/craftware .. but inspecting g-code shows that IM did everything properly so I just need to figure out why the nozzle is empty at the start of the layer when this gap filling is performed... will compare codes as now I have two slicers making same erroneous print so will probbly find easier why the problem happens

thanks for sticking with me, just writing on the forum help me investigate better (rubber duck effect