Since the previous posting, I have had several successful prints on the E2 using the following types of filament: Raise3D PLA, MatterHackers Build series PLA, Monoprice PLA.

Moreover - I have borrowed a Prusa to test the MH Pro PLA and found THE SAME FAILURE OCCURS. Here's what i woke up to this morning:
https://www.dropbox.com/s/3fzppk4fnhnb55c/IMG_7123.MOV?dl=0


My Conclusions:
1 - do not buy MatterHackers PRO PLA until they get to the bottom of this. Others on the Raise3D forums are having trouble with that filament, and my tests confirm it isn't just the E2 having issues with it.

2 - I still believe the filament path has too much friction, after having disassembled it. Two really easy changes are (a) hang the filament by the spool center instead of rolling on the outside, and (b) take out the rubber 'plugs' which add rolling resistance when the spool rubs against them.
Last edited by WayZada on Tue Aug 25, 2020 2:48 am, edited 1 time in total. 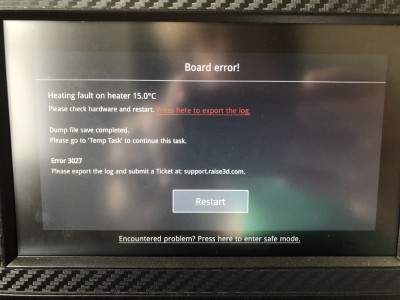 Anyone have experience with this? Dumping logs and sending to tech support now.

Thanks @Blue21 - I have seen it. This filament also failed in my Prusa MK3 i3 in the same way, so I am fairly certain it is this filament. Maybe direct drive just doesn't work with this filament?

And here on Amazon:
https://www.amazon.com/MatterHackers-Black-PRO-PLA-Filament/product-reviews/B01F5Z1UCG
Last edited by WayZada on Tue Aug 25, 2020 2:49 am, edited 1 time in total.

This error most likely does not have anything to do with the filament or the extruder. It looks like a temperature errors. So there is possibly something worng with the heating or temperature detecting electronics.

@Vicky - I have had success with filament from MonoPrice, MatterHackers Build PLA, and eSUN PLA+ on the E2 and a Prusa all using the same settings and prints. So, the filament is the only common failure point...

Continuing to document for all following along. The tech support at MatterHackers has suggested that I need to reduce the flow rate. The default profile in ideaMaker for PLA was 96%. I reduced the flow rate to 85% and have experienced the same failure, again not emerging until several hours into the print. Video of 'clicking' extruder here:
https://www.dropbox.com/s/1zmkamq3505qbck/MHProPLA_85.MOV?dl=0

Raise3D has me jiggling and connecting/disconnecting extruder cables, and I'll replace them when the parts arrive.

Here is the gray filament failing in the same way as usual on my Prusa MK3 i3 with flowrate dropped by 10%:
https://www.dropbox.com/s/z5fdhs9um42itc3/GreyPrusaFail.MOV?dl=0

Hey all - new cables and filament sensor board installed. Time for another test print and... fail.

The extruder with the grey filament continues to slip on the filament and fail to properly extrude. The result is uneven extrusion and failed prints. See images below.

BTW - after this print I did disassemble the extruder to look for jams and clogs, finding none (as per the usual). Note also used a different spool of MH Pro PLA here to make sure it wasn't just one faulty spool (it wasn't) 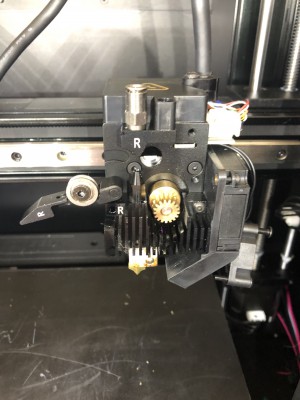 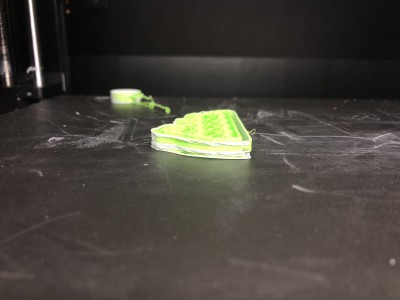 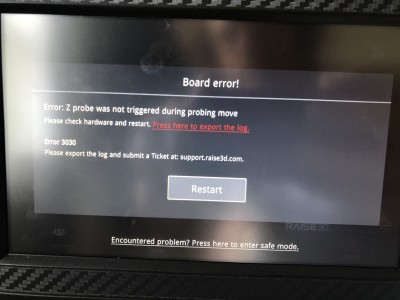 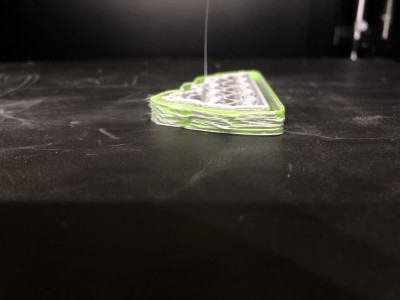 Still having the same issues as before with the extrusion. No temperature errors thrown yesterday, though I did experience:
(a) Error 3030 (z probe not triggered during probing move), and
(b) one case where I used the ‘home axes’ option and the z axis went down until the nozzles hit the bed, then the motors continued to push the nozzles down into the bed. The touch screen was unresponsive so I used the hard-wired switch to power down the unit and stop the motors from ‘bottoming out’ into the bed.

This morning, back to temperature errors: 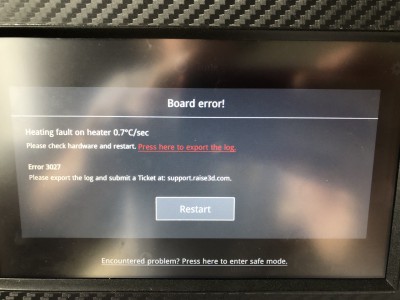 Sorry to hear that the issue didn't get solved with the new parts.
It is hard to guess which part is causing the issue. Connection cable is the most common part might fail in similar temperature case But since you have tried extruder cable, I will guess whether it can be related to extruder board or not.
And for the Z homing issue, it's probably related to the lifting Probe.

for those following along. After replacement of cables, boards, and repeated trials, my E2 has been deemed defective. It is being shipped back to Raise3D and i'm going to proceed with a different machine. I hope my experience has been a rare case, but perhaps this thread will help others troubleshoot. Shout out to awesome support from Dynamism (where i purchased my machine) for their help with the repair and return process, and thanks to Raise3D for helping work through many different attempts and fixes before making this call.
Post Reply
33 posts