I changed the half used roll of filament from the RH to the LH side of my E2.

Now I keep getting 'Filament sensor paused print' message and the extruders go to the parked position.
It's not because the filament has run out because if I then press 'Load Filament' the extruder reloads the filament.
Then I go back to main screen and press "Continue Print"

The latest print stopped just after I had gone to bed and because of the fans not switching off when the printer is idle, the fans continued for several hours again.

If I do a reset from the touchscreen will this clear this problem because I do not want the hassle of returning the whole printer to the seller in the UK just to repair this ?

Please try the following steps:
- Unload filament
- Remove the PTFE tube from the quick coupler on the filament compartment
- Take a small peice of filament and pass if through the runout sensor on the filament box. When filament is detected the light should turn off and stay off. If the light flickers or comes back on the sensor may need to be re-aligned.

It seems the problem in my case is a faulty sensor.

I was asked to swap the sensor for the the RH one to try it, the print is nearly finished now after running since mid-day yesterday so I think in my case it's a sensor module fault.
https://support.raise3d.com/E2/how-to-r ... -1038.html

Next I will try the the faulty sensor that is now installed in the RH side just to confirm it is a faulty sensor.

It is possible that the sensor could be faulty. If you can't confirm whether it is the hardware causing issue, you can create a support ticket to reach to our technicians to help confirm whether you need a new sensor.

It is a faulty sensor and I'll be fitting a replacement.

I have noticed that you need filament in both sides otherwise the filament sensor triggers. I find it quite annoying that I cannot just load up one side to use single extruder printing without having to load a roll or piece of filament in the other side to prevent this. I love the E2 machines but starting to realise corners were cut in the development, which is hugely disappointing for such an expensive machine

IIRC after I swapped them over and just used the LH side and left the RH side empty it was not a problem.

I'm nearly at the end of the current RH reel where I've got the faulty sensor, I've got the sensors disabled in the touchscreen. Next step is to put a new reel in the LH side and put the new sensor in the RH side and then enable sensors again and then use the LH reel until it runs out and hopefully the sensor pauses the print.

The LH side of my printer is up against a wall so I can't easily see how much filament is left which means that's the sensor that I really need to keep working. So I like to use the RH accessible side for support filament.
I'll see if everything is okay without any filament in the RH side as to whether it affects the sensors having no filament in the LH side.

Not at all happy now.

Put the replacement sensor in the RH side and started a print, just after starting a brim the sensor stopped the print.
I then put a piece of filament through the LH sensor just in case with that being empty it had triggered the sensor pause.
Resumed the print and before it had even finished the brim the sensor triggered again.

Switched off and after a pause I switched the printer back on and started the print from the beginning, sensor paused the print before the extruder had even finished purging filament on the bed.

So I've had to disable the sensors.

I can now see this ending up with a printer return and if it can't be fixed I'll need a refund.

Ah, so frustrating when these things do not work as intended or expected. I hope the dealer fixes things for you, whether repair, replacement or refund. Good luck.

Good luck with the refund, it is usually the point where serious company show their strength. Sounds like in UK you have nicer consumer protection law than like here in Switzerland.
At least on mine it is printing fine, just noisy with no need and errors in log files, but who cares (at least until it comes really dramatic, in the mean time I put a smoke detect in it, just in case of).
E2 + Prusa Mini (soon) <- UM 2+ <- Replicator2

Aero3D wrote:Ah, so frustrating when these things do not work as intended or expected. I hope the dealer fixes things for you, whether repair, replacement or refund. Good luck.

I've been impressed with them so far with their response, so I've emailed them and hope for a reply early next week.

Found a possible reason for the snsor triggering.

Couldn't see anything obvious with the sensor, but I did see that if I held the Bowden tube vertical the light went out when I let the Bowden tube relax to its normal position the out of filament light came on.

It seems to me that if the first 2-3 inches of the Bowden cable had a stiff support to stop any sideways movement of the filament in the tube and sensor it might help. I'm going to see if I can somehow stiffen it with a splint taped on.

I made two Bowden supports and initially it seemed to help, but the replacement sensor is so very sensitve that it's unuseable so I put the old one back in.
Did a print of another support and it went okay, put a brand new roll of PLA in and started a longer print, sensor triggered after a couple of minutes or so, so I resumed the print.

37 minutes into the print and it's still going, but for how long is anyone's guess. 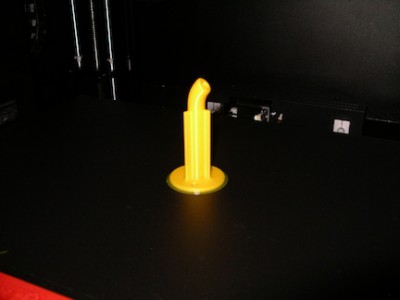 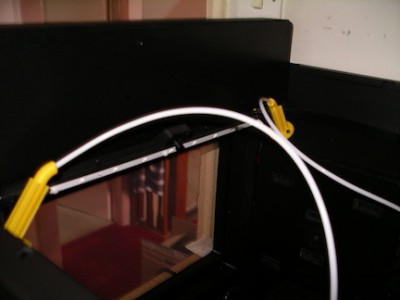 Can't help but wonder why the sensors can't be just a simple micro switch rather than the fancy unreliable electronic sensors, I'm just waiting for my second replacement to arrive.

Printers that hang up are like guns that jam - useless! Using owners to beta-test released products: Ridiculous!!

Besides the obvious filament path interference issues that are the root cause of your problem, an optical encoder using a wheel with cutouts to sense rotational motion would be a logical fix for the runout sensor problem. It wouldn't matter if the filament had the index of refraction of glass, it would still detect feeding as long as the wheel moves.

Using the same optical sensors they have now, it wouldn't be that hard to redesign the runout sensor using this methodology. So it costs a few dollars more? These are premium prosumer grade 3D printers.

Having worked in high-reliability aerospace applications for much of my engineering career, I'll take an optical solution over mechanical micro-switches any day. They're far more reliable when you have the right mechanical and electrical engineers design them properly.

I hope Raise3D sorts this issue out for you soon - negative feedback costs them sales, but they do make an honest effort to fix known issues - my take is why do the owners have to drive product improvements? Feedback is nice, but it shouldn't fall on the community to become the voice of the QA department. They market beautiful printers that scream industrial quality, but fail to execute the small details well.

I can confirm here that I've run prints successfully with both filament sensors entirely disconnected (cable clip unplugged) with no issue. I suppose this means I live dangerously as filament runout would be possible, but that is a temporary fix that i can confirm will allow you to keep printing.

WayZada wrote:I can confirm here that I've run prints successfully with both filament sensors entirely disconnected (cable clip unplugged) with no issue. I suppose this means I live dangerously as filament runout would be possible, but that is a temporary fix that i can confirm will allow you to keep printing.

I just had to disable filament sensors in the settings screen, my major problem is then that one side of my machine is up against a wall and it would mean having to keep moving the printer to keep an eye on how much filament left on that side, so basically limiting the functionality of having two extruders.

I am now on my third filamnt sensor since the printer was new at the beginning of July and now I've just had a print stopped four hours in because of a board 3028 error stating the maximum temperature was exceeded on Heater 2. I see you just had something similar happen.

I'm beginning to wonder if I have a " friday afternoon " printer.

Hoping for a reply from my supplier about it today. 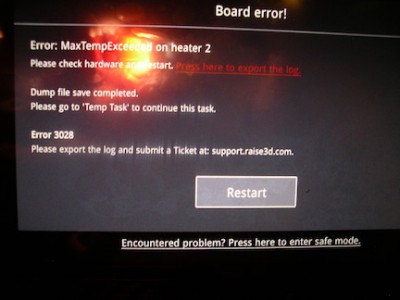 @BikeRacer, I've thrown an Error 3027 and ahve a ticket in with them.

This error should not have anything to do with the filament or the extruder. It says MaxTemp which means the printer detects abnormal high temperature out of regular range. There's probably something wrong with the temperature detecting electronics.
Post Reply
25 posts