Engineer87 wrote:I have the prusa mk3 and E2 in my lab at work. I like the prusa and would own 1 personally. but they are not in the same class of printer.
E2 is not perfect, but for a prosumer grade, its a value. With a few tweaks, its a workhorse.
E2 has
Robust enclosure with optional safety feature
Idex vs the PoC prusa multimaterial unit
Larger build volume
User interface
Cloud features
Growing Open filament program

That's a pretty short list of extras for a printer that costs almost $3000 more. The ONLY thing I use the E2s for now is PETG prints because the enclosure with filtration is nice.

Buildtak magical constantly wearing out surface is a disaster. I still have the original PRUSA MK3/s spring steel plates from launch and they are a little banged up, but perfectly good. I have to replace the buildtak surface for $50 every few months. Lame.

User interface is nice overall, but has some very stupid UI decisions. It's like the UI was designed by a programmer with nests of menus instead of a UI professional with a focus on usability.

Calibration still only lets you use PLA. So I have to unload my PETG on BOTH heads when I change an extruder and recalibrate? Lame. There's no good reason they can't let you select the material you have loaded and just calibrate with that.

Growing open filament program? Really? You're out of legit features so fast you used THAT?

Firmware upgrades are VERY infrequent, despite the firmware still being pretty rough and missing key features. PRUSA destroys Raise3D in frequency and heft of updates and new features.

Anyway, I bought 2 of these, so they have their place. I just wish Raise did a better job with the product details and firmware releases.

Can someone who has a camera with uvc protocol connect it to the E2 to see if it works? just plug it into the USB port
Raise 3D E2, Prusa i 3 Mk3s Mmus2

I just tried that and set it up on the printer and it displays, as long as you set it to the one you want. 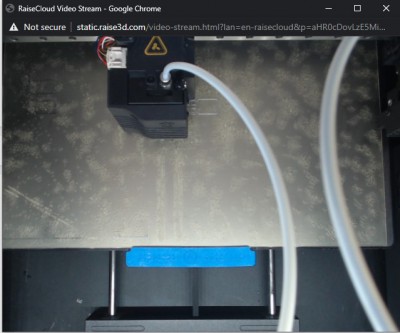 Edit, I am using a Logitech C920 for reference and it does do the autofocus and auto exposure.
Printers: Raise3D E2 - MatterHackers Pulse (B Frame)

I have a wyze cam

I am now using my ELP camera

What did you have to change to get your home screen to look like that?
Printers: Raise3D E2 - MatterHackers Pulse (B Frame)

meelo88 wrote:What did you have to change to get your home screen to look like that?

That screen is the desktop raise cloud software.

Oh that makes sense…Use raise cloud on the web or the app. I should check that out
Printers: Raise3D E2 - MatterHackers Pulse (B Frame)
Post Reply
30 posts