Hello Guys,
I have been using my N2 double extruder as a single extruder for about 3 years with no problems at all but I want to switch from Left to Right, just to balance up the wear if any, on my motors and what have you.

Do I just extrude through the right and go from there?

#1 there is no real thing as wear on a stepper motor. Literally, I have 10 year old used stepper motors, that were used before being put into a 3D printer, and then used them for 10 more years. Heck the only parts that "wear" are 2 ball bearings on the shaft and they will outlive both of us in this duty of an application. There are no brushes, there are no other wearing parts than 2 bearings.
#2 you could reasonably argue, that over time, given enough filament, the gripping teeth of the gears can dull and wear. I'll fully give you that. Wouldn't be a bad idea to change them out after a certain amount of usage (couple hundred spools of normal filament). Some filaments are actually abrasive such as glow in the dark and some filled filaments (carbon fiber, some of the brick or stone, certain metals, etc) can and would accelerate tooth wear.

So yes, just assign the other extruder in slicing and that's all that is required.

In fact, I'll go one better.
Probably, we all should have switched and used the right extruder from day one in single extruder applications because the right nozzle actually is slightly more build area given the offset location of the bed. What I'm saying is, do not assign the right extruder in slicing, instead, maintain left nozzle in the slicer, but right nozzle physically, by simply connecting the heater and thermocouple for the left extruder to the right physical nozzle location and then also the stepper motor cable. Make the right side logically the left.

Yes, your prints would be slightly over to the right on the bed given the leftmost gantry position, but due to some poor bed location vs homing and other phsycial limits, technically, I'm pretty sure using the right as the left would give more logical and thus usable space. The right nozzle is over the bed surface in all but the front most position. EVEN when homed as far left as it will go, where the left nozzle is actually off the bed. That means that again, technically, the right nozzle has more overlap of the bed, and thus in theory, more usable area, however, you also have to kind of defeat the logical offset that the firmware or slicer would put in when using the right nozzle- but that is simply done by just using single elxtruder defaulting to the left and wiring the right extruder as if it was the left extruder.

Know your breakout well. By that I mean know which thermocouple and which heater are extruder 1 or left by default, and then you would be physically either moving the heating rods and thermocouple as a matched pair to the right, or rewiring the right side to the left. Whatever you do, do not cross connect meaning heater of one connected with thermocouple of 2 because that's how you instantly invoke thermal runaway. The temp sensor must be matched to the heater. Remember the controller can only control a heater if it then also knows the temp of that heater via the thermocouple both physically and logically attached. If you mismatch, the heater heats but the thermocouple still thinks it's cold. 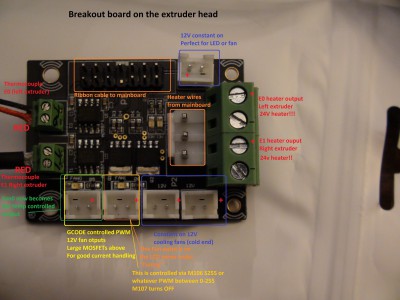 More build area is a good point. Can‘t subscribe that there‘s no wear on steppers - i had to replace 3 steppers on my Ultimaker, so far. All failed by defective ball bearings. 2 xy motors and 1 extruder. (Nema17)I know, can‘t compare the burden of x y motors with extruders, on the other hand they are exposed to higher temperatures. I have more concerns regarding the lifetime of the 4 gantry xy rods (Pro2) they look like sh.. after 1 year use. (70days printing). They have a lot of visible wear, surface is not smooth at all - but couldn‘t regognize any negative impact on print quality so far. Seems that the self greasing brass bearings are overstrainend in this position. (Or steel quality is not sufficient) I started to apply a light ptfe oil before starting longer print jobs to prevent things getting worse. Actually the local Raise dealer delivered the Pro with grease(!) on the gantry rods. The ball bearing rods are greased and fine. I also take care of using different positions on the print bed, to get a better use of the mechanics - not using always the center for smaller prints. Any thoughts on this? Am i too anxious in this respect?

Data point. I was trying to count them up.
I lost count at over 60+ printers in 10 years, never once replaced ANY stepper due to a bearing failure.
Typical printer has a minimum of 4 steppers so 60x4=240 stepper motors/0 failures and truth is, many had 5 or more steppers depending on dual Z steppers or dual extruder and some had more than that. Then you count in other devices not 3D printers like robotic builds, cnc machines, laser cutters, probably add at least another 100 steppers to that count for somewhere on order of 300+/0 failures due to bearings. The less than 5 ever steppers replaced- 3 were bent shafts from mechanical damage to the machine (dropped), the others were connector or electrical failures where it was just easier to replace than attempt to correct and find the broken winding and attach to a wire.
Then you compare the one user replaced 3 steppers.
Something seems off. Low quality steppers? Bad alignment? Excessive side loading or other abuse?
BTW, I've owned a few Ultimakers too.

Yes, I can say on my N1 I recently had and literally am trying to put back together my N1 with new gantry crossing rods due to the linear ball bearings failing, however, the bronze bushing with graphite lubrication pucks and edge rods are all intact and fine.
So yes, there is wear and tear in a given printer, yes, bearings and motors can have variable quality and fail earlier, that said, in general, stepper motor failure as reported in this forum and I read every post since the company started is not even a multiple instance that i can remember. Plenty of coupler failures, no specific motor failures related to wear and tear I can think of. 4 years is a reasonably long time.

Again, a search of this forum the handful of actual replacements appear to all be electrical failure or some sort of other issue not directly bearing related.
https://forum.raise3d.com/search.php?ke ... d%5B0%5D=4

This case was a stuck gear on the motor, nothing wrong with the motor https://forum.raise3d.com/viewtopic.php ... ment#p4666

This topic the user replaced them for reasons we may never know https://forum.raise3d.com/viewtopic.php ... ent#p52541

And we find circling around, in this topic, the motor and the replacement still pointed at other problems driver and wiring related https://forum.raise3d.com/viewtopic.php ... ent#p53507

Good to hear, it seems related to the quality of the UM steppers - there are (were) several fails with bad bearings.

The replacement motors are working now since 2016. I‘ve got 2 in spare, safety first

Thank you Jetguy as always and Kurtyard for your contribution, appreciated guys, have a great day!

Again, I fully understand what you want to do and it's not a bad idea.
It does take a little bit to move the logical connections over, but as said, you might be best off doing just that, making the right the left extruder as far as wiring goes, and by doing so, just keep on slicing for a single extruder defaulted to the left logical side. At first it might seem wrong, but it's actually the more logical thing to do given a number of other known problems in this printer and the bed is bigger than the build area anyway.
Post Reply
10 posts • Page 1 of 1