My Pro2 is dead. The only fuse I can find is the cylindrical glass one beside the power input (arrowed). The only fuses I was sent with the machine are a 10 and a 15 ohm spade-fitting solid-state type. 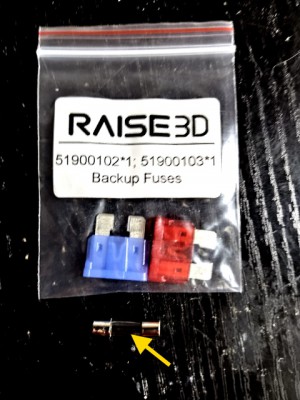 I can find no documentation about either type of fuse in a Pro2, no indication of where to find them or how to replace them.

I have a dead machine and I need some help.

Vagulus wrote:My Pro2 is dead. The only fuse I can find is the cylindrical glass one beside the power input (arrowed). The only fuses I was sent with the machine are a 10 and a 15 ohm spade-fitting solid-state type.
200419_Raise3D-Pro2-Fuses-480x640.jpg
I can find no documentation about either type of fuse in a Pro2, no indication of where to find them or how to replace them.

I have a dead machine and I need some help.

Likely blown fuse in the power entry panel.
The Pro2 series power entry and main PSU is basically the same as he N series.
So the same basic 101 troubleshooting is valid.
That's where that glass tube fuse goes.

Likely blew from repeated inrush power draw, often caused with rapid on/off of mains power to the printer. A good reason to power electronics like a couple thousand dollar printer from a UPS.

Here is that power entry and without the cord plugged in is how you can remove the center fuse holder. 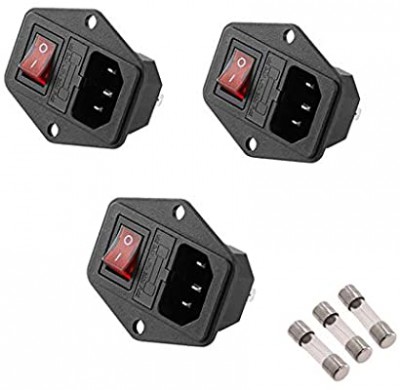 This video shows removing the fuse holder on a socket that doesn't have the switch, but is basically the exact same as what you need to do.
https://www.youtube.com/watch?v=8Xy58zLB5_c

The OTHER blade style automotive fuses plug directly on the motion control board in box in the lower right of the filament bay on the side of the printer.

The 10A rated fuse powers the main motion logic, the 12V regulator powering the LED strip lights and fans, and on the Pro2, the extruder stepper drivers. The N series, all axis steppers are onboard, where pro2 went to external stepper drivers in the base of the printer for XYZ, but the extruders are still on the motion board. The 15A fuse is for the heated bed.
Also, might want to make note, Ohms is resistance, Amps is current rating. Kinda important and I realize typos get made, people misspeak but we all need to ensure we know electrical basics. Kinda matters.
I beyond highly doubt you need bother looking at the motion board fuses. That is not a symptom of this problem
If and only if, you had the LCD power up, but the fans, LEDs, and then also likely a serial error on the LCD, then we'd start thinking about a motion board fault.
The Motion board details are easily seen in this link https://support.raise3d.com/Pro2-Series ... 4-108.html

In a nutshell, the power works like this.
The AC wall power comes into the back power entry panel. That panel has a fuse. Also has the main power switch. From that, the power goes directly into the massive 24V power supply that converts wall power to 24V DC. That 24V DC is separate wires that one set goes to the front panel LCD control box known as the Raise Touch. That is a complete and separate box and has no user replaceable fuses. If the PSU is making 24V power and that box doesn't power on and power the LCD- then the lowest user replacement item is the entire control box. A the same time, much heavier current carrying wires go to the separate motion control board. There are actually double connections. The heat bed gets separate 24V input simply to no overload the wiring or connectors and why it has a separate 15A rated fuse, while there is a second set of 24V wires also going to the middle edge of the motion control board, and that powers the logic and motion section. Additionally, that motion board regulates 12V and all the fans and LED light strips are powered from the 12V. So if the 10A fuse blows, no motion, no lights, probably still have the front panel LCD control box booting and thus giving a serial error because it cannot talk to the motion board, because the motion board logic section is not powered. Again, this is not your scenario- you as explained, have no indications of power, and most likely aren't getting power past the power entry fuse.

It was the red fuse that blew. The trick was getting into the Motion Controller box. The tutorial on that link is no help in trying to figure that out. I mean, it would be a help if you already knew to force a blade into the gap between the cover and the box so you can lever it off. But if you already knew that you wouldn't need any help. That photo does not have enough detail to show what the hands are doing. I was only the skulduggery born of years in the trade that let me find out.