This morning a power outage paused a task. Selecting Continue current task or whatever resulted in my Pro2 continuing the print with the Right (support) nozzle not the Left (product) nozzle. 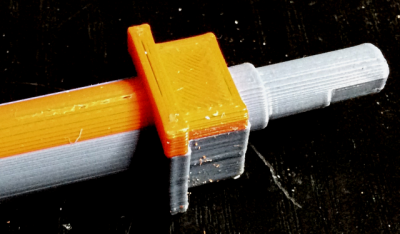 I'm looking on the bright side.
It could be racing stripes. (Wow!)
I could use it as a datum for a tachometer reading. (That's handy!)
In any case, it's different!

The facts the lead up to such a scenario:
The firmware defaults to the left Primary extruder. Unless specifically commanded to switch, all lines of gcode are assumed to operate the left extruder. Individual line of print gcode do not specify that they are a certain extruder. The ONLY way it knows to use the secondary extruder is there MUST be a command to switch BEFORE lines of gcode are read and executed.
Obviously, you were using the secondary extruder for an entire print- something I personally have told this group not to do for this very reason. Left is primary and default- right is secondary and should something go wrong........... If you always used left, there is no chance of this error.

Another tip while looking at this, your extruder offset may be off- the left and right nozzles did not perfectly align in the resulting print. That could mean the nozzle offsets in firmware need slight adjustment or could just be the slight variability of the XY homing since it's not intended to be perfect. You might want it to be perfectly reputable every time, but the speeds and homing sequence are not sub mm accurate as standard.

So this is exactly what happened- without ever seeing your file.
You printed with the right extruder (AKA secondary).
Your print file obviously contained the extruder switch command to the right secondary at the start of the file.
When you lost power, the entire system (both control boards shut down).
When you power on, the motion control board boots and since left extruder is default, left extruder is defined UNITL a command is sent to tell it right extruder is active.
The saved recovery file is JUST the line in gcode that last was printed!!! I say again, all the recovery file knows is the original file being printed, and the exact line last acknowledged when sent to the control board.
However- The starting gcode- that all important code that sets up the proper machine state before a print- a recovery print uses a modified starting gcode NOT the original starting gcode contained in the print file. This is obvious because if the starting gcode homed Z as in normal print, you would be screwed when the bed raises with your print on it and slams into the central gantry with the extruder trying to home Z- so again, it doesn't use the original code, it uses a special "recovery print" gcode.
Somehow, between the starting gcode and then the next new line in your gcode- the extruder command switch gcode line was never sent.
You print file didn't contain it before the resuming line of code, and the starting gcode didn't contain it, so, it's not sent.

You can call this a bug or whatever, but there are a crapload of variables all user driven here.
What slicer made the print file?
Was the slicer version and the firmware version loaded on the printer made as a "pair" and compatible, or do we have a mismatch? I'm saying this because the slicer could fail to put a line of gcode in the sequence where the firmware was expecting it, the firmware ONLY can look in limited locations and not the entire print file and so when it doesn't see the command switch where it expected, it's then not going to send it.
If you want to report this bug properly to Raise 3D in any hopes of ever having it fixed, you must:
#1 Send them the gcode print file for this print
#2 Send the serial data log- although I'm betting that either doesn't display the detail w want or already proves what I said, the command was never sent.
#3 The firmware versions on the printer- there are 2 and as an operator owner, you should be extremely familiar with these versions and know what you are running.
#4 Probably should be able to get it from the gcode print file, but the version of slicer used to make the file.


At the end of day, we are still back at good sound advice.
Do not use the second extruder as the only extruder in a print and then expect power loss recovery to be perfect.
Do not expect power loss recovery to work. Be happy when/if it does. Power loss is bad for printing period. The printing process requires that it's completed in one session for thermal reasons, and anything that interrupts the contiguous process causes weaker layer bonds anyway. It's a gimmick more than a feature. Yes, nice to have, but not a business plan for serious 3D printing. You SHOULD be using a battery backed UPS to power the printer and even then, long power loss is pretty much a failed print.
As an owner and operator of a 3D printer, take the time to learn and understand gcode because ultimately, it is what controls the printer and defines troubleshooting technical errors. You either "get it" or don't, and that's the difference between amateur and pro.
Again, I've said it since secondary extruders became commonplace in 3D printing, ALWAYS use the primary for a single color print and use the secondary when required in a print as a true secondary material or color.
Even if fixed today in a. firmware and slicing update, I would expect this kind of error to come up again and again due to limitations of gcode print file structure and the complex nature of print recovery. Far too many variables and gotchas for print recovery to be absolutely bulletproof. Again, a gimmick- not a guaranteed works every time feature.

Thanks Jetguy for a detailed and well reasoned answer. I appreciate that you put a lot of effort into that. I'm sorry that I have to tell you that I was not printing the entire object with the Right (support) Nozzle. You can see that in the photograph in that most of the axle (the object in question) is grey but the last bit is red.

Would you like to share your gcode file which can recreate this issue? We'd like to help check whether we can find anything in codes or not.

I can't say I've run into this problem on my Pro2 plus. After two power failures caused by thunderstorms, I put a UPS battery between the machine and the wall. No issues with power loss since!

Would you like to check which version of RaiseTouch firmware you are currently using?
We should have a similar bug fixed in version 1.2.0 release.

Would you like to update your RaiseTouch firmware to be the latest version on our website and test the issue again?

I am using an UPS that for some reason is not quick enough. Pro2 plus go on with power loss on thunderstorms.
Should I change anything on setting to active the use of an UPS?

No, there's no settings to change on the printer for a UPS. You just need a better UPS!
Post Reply
13 posts • Page 1 of 1