Auto - resume not working at 100% battery

Auto - resume not working at 100% battery

Hi, the auto-resume feature on my N2+ is not working, even though the battery is about 98%.

Is there any additioinal setting that is to be enabled, etc or is it a default setting.?

I recieved the printer 3days back at about 40% charge and I had printed a few small items and the battery reached 100% just today, does this have anything to do with the problem.
Any suggestions?

The power fail resume function only works if the following conditions are met:
#1 battery is fully charged or near fully charged at the time of power failure. I don't know what the minimum required is (that changed with raisepack versions on the pcduino over time), but let's say 95% or better
#2 The gcode file being print contains the proper M1001 and M1002 command lines at the end of the starting gcode sequence and beginning of the end gcode sequence. By default, Ideamaker software has these in the slicer settings. Other 3rd party slicers need them added.

When the power fails mid print after you have gotten past the starting gcode sequence (homing, preheat, and extrusion prime) then during the print, the power is lost and the motion board and all 24V systems lose power. At that point, the pcDuino front panel LCD streaming the gcode to the motion board sees both the power loss event (because it's powered via 24V) and sees the motion board drop off and not send the last line completed) then on battery power, the pcduino writes a save point of the last gcode completed, says this on the LCD, and then shuts down the linux operating system.

When you power on the next time after such an event where ALL conditions were met AND the system said it saved a valid dump file (basically did not say Dump file NOT saved), then upon startup the first screen asks if you want to resume that saved dump file job. If you resume, it rehomes XY only and not z, and then heats up, extrudes, and then starts where it left off.

Again, assumptions that can go wrong here:
Recovery works only in a certain state of battery, in a certain sequence, only if everything is correct.
It depends on the Z axis friction that the Z stage and build plate DO NOT MOVE in the off state after the print. Since there is something on the build plate, there is no way to rehome Z axis safely. Again, this entire system not only depends on the save function, but the assumption the build plate does not move during the off state.
Finally, it assumes that as the bed cools down without heat power, that the part remains firmly stuck. If the part curls up, warps, or other problems like breaking free, you cannot effectively recover that print.

Recovery is a nice to have and great when it works, but is not bulletproof and should not be used because you want to stop a print and resume it later.

Please help check, when you turn off the main power, does the screen display something like, it is saving the dump file, and the dump file is successfully saved? Or the screen turns off directly with power off. 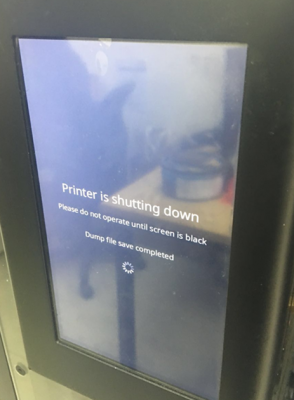 Well, one of three of mine do so - just power off all. And I think the battery works strange. What would I check? Have updated FW and touchscreen. Thank you.

Well Michael, hello!
I've got three n2duals.
One of them turn on/off normally.
Second is not display anything - just black screen after turn off and then power up looks normal(not sure about resume func.)
And the third one is quickly show some error! and then writing dump and power off like normal.
But all three printers works fine btw.
thats all I have for now.. sorry for not much details.
What can I check? maybe some cable not plugged right...

The normal one, could you please list the order screen displays after power off?
The second without saving dump file, please enter Other tab under Settings to check the voltage of the battery. What value does it show? Does the value change a lot in few minutes?
The third one, would you like to advise the complete message of the error?

the 3rd: (printing now)
batt volt 4.00, 4.01
(printing is over while I'm writing it) after shut down -> serial error: no such file or directory -> printer is shutting down, please do not operate.., dump file was not saved (not printing) -> the end.

All printers are N2Dual but with 1extr enable SO another question is which motherboard firmware should I use (for dual or single) ?
All printers updated as duals.

The first and third one seem to work with proper function.
The second, the power of battery detected is not stable. Please check whether any loose connection of the battery so that the board cannot read the battery's power properly.

Hmm, how is it proper function with that errors? (errors appears bcoz printers not printing and have nothing to dump-write ?? =) )

Ok, I'll look inside the 2nd printer and see what's what. never check what inside btw.

Since you are not printing, so there will have no dump file to save. Dump file is for resuming printing after power interrupted during printing.
If you have no idea how to reach to the wirings, please make contact with our support team.

And what about motherboard firmware question? I have N2Dual but with 1 extruder enable. It's not the same as N2 single ?
Спасибо a lot!

Hi Vicky and everybody!
I've check the wires and all around and everything looks fine!
Put all things back together and nothing changes - battery's V jumping every 3sec (3.7-4.1-4.3) and printer turn off without any messages.

I could test a battery from another r3dn2... maybe later.

Is it bad to work without battery at all?

Just for the heck of it, if you're already there, take it out and throw it in the freezer over night. It might not help any, but sometimes it helps. If you have some basic electronics in the closet, bring in a resistor and a standard LED and let it light until voltage is actually down to 3.7 V. Put it back in and see what's happening after it's fully charged from the printer.
Post Reply
17 posts • Page 1 of 1