Hi. Is it possible to connect to the printer directly via internet to view the progress screen?

First let me start with the fact that a lot of people advice to not let a printer run unattended because it can be a dangerous machine heating up to hundreds of degrees etc.

Now with that warning out of the way.... The most simple way would probably to have a machine with Ideamaker and Teamviewer installed inside your network so you can use the Teamviewer client to get a reasonable safe entry point into your network to watch the printer info

Given that hackers like to hack thing and turn them into cloud processing points, putting a 3D printer with a computer inside it does not seem to be a good idea.
RL name: Michael Nolen
printers:
raise3D N2 kickstarter Early Bird
Trinus Deluxe (running smoothieware on Azteeg X5 GT board)
Monoprice Maker Select v2

Thanks. I have a Logitech C922 connected to an iMac streaming the print. And I have smoke detectors in the room with the security firm coming home when the alarm goes off. And a remotely connected electrical outlet that I can turn off from everywhere. And fast and reliable fibre connection.

Many people here (myself included) use Teamviewer to access a computer that controls the printer. It does require an always-on computer but I have used it many times with great success. Another benefit to using a computer is the ability to run video monitoring and recording software. I can view and control the printer and review video footage of prints when they go wrong. It sounds like your iMac might suit this perfectly.

PS: My printer is running unattended most of the time. I'm not sure how anyone can be expected to watch the printer for 60+ hour prints. I'm using a nest smoke detector and a smart outlet to automatically turn off the printer if there is smoke.
Raise3D N2+

The Raise3D printers listen on TCP port 31625 for remote control from ideaMaker.
All it takes to make the printer accessible from the Internet is to create a port forwarding rule in your router (TCP port 31625 forward to Printer local IP address).
Assuming that you have a public WAN IP address, then create a connection in ideaMaker to your public IP address.
ideaMaker communicates with the printer using a proprietary protocol, so unless a hacker uses ideaMaker, then he can do no harm to your printer, and if he really uses ideaMaker, then he can only do what ideaMaker can do.

I was able to get this to work on a network that uses IPv4 protocol. How do we do this with IPv6 addresses for public IP?

Short list of things one could do:
#1 stop your print dead in the middle of some huge long print with zero chance of recovery.
#2 home the printer with something on the build plate for you.
#3 print fun and exciting objects on your printer for you using your plastic. Something definitely not "PC" or family friendly.
#4 extrude a whole roll of filament for fun- just in case you wanted a birds nest and/or your extruder encased in plastic.

So yes, please, put your completely unsecured, wide open, no authentication required printer on the internet. I promise, nobody would ever think of messing with it.

.
The printers might receive some "noise" on port 31625 from the wide Internet, but not something that would be interpreted as valid Raise3D printer commands.
If this worries you, then on most routers you will be able to define access restrictions based upon IP Address or MAC Address. This reduces the flexibility of your remote access, but typically you will just use a single or two remote computers, which could then be the only ones allowed to access your network from the WAN.

About IPv6. You propably don't use IPv6 on your LAN, and I don't even think the WiFi module in Raise3D printers supports IPv6. You might have IPv6 fixed public IP address (?) -If so, then your router would again do the job for you of forwarding the WAN port to the LAN IPv4 IP address of your printer. The problem then comes with ideaMaker, which I doubt will accept IPv6 IP addresses (but I might be wrong, I never tried).
Last edited by ABH on Tue May 15, 2018 8:57 pm, edited 1 time in total.

Given that the security is way out of date on the pcDuino and no way to update it. someone could probably hack their way into your printer and do something else with it.
RL name: Michael Nolen
printers:
raise3D N2 kickstarter Early Bird
Trinus Deluxe (running smoothieware on Azteeg X5 GT board)
Monoprice Maker Select v2

I am normally not arguing against security on the Internet, but I honestly believe this is paranoia.
We are talking about opening a single port here. A port that is under full control of the application SW running on the pcDuino.
I don't know the protocol used for the printer communication, but the fact that you need to enter the printers serial number in ideaMaker indicates that there will be some authentication going on before the printer even starts to accept commands from ideaMaker (or some evil hacker from the Internet).

ABH wrote:I am normally not arguing against security on the Internet, but I honestly believe this is paranoia.
We are talking about opening a single port here. A port that is under full control of the application SW running on the pcDuino.
I don't know the protocol used for the printer communication, but the fact that you need to enter the printers serial number in ideaMaker indicates that there will be some authentication going on before the printer even starts to accept commands from ideaMaker (or some evil hacker from the Internet).

?? When and where do you enter the printer's serial number into Ideamaker to make a connection?
What version of RaisePack and matching Ideamaker does this?

I can only guess you are talking about the bookmark? 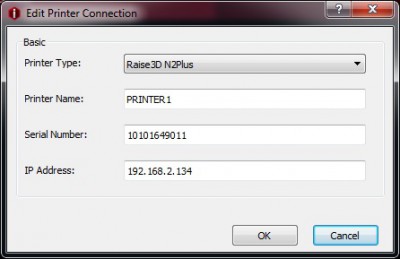 So the problem with that theory that is a placeholder for implementing authentication, well right now, your printer transmits that serial number across the open protocol now.
Again, what happens is, when you open the connect window, your printer shows up in the automatic scan of your local network. When you the user select a printer to make a bookmark, it gets the serial number from that initial not even connecting handshake to the printer.
Again, let's be clear here, you don't enter that serial number, it's populated by the printer just from scanning the network.
Second, just to prove that serial number is not tied to any current authentication, change it in the bookmark to an incorrect number, and then hit connect and it connects like nothing is wrong.
Last edited by Jetguy on Tue May 15, 2018 9:43 pm, edited 1 time in total.

?? When and where do you enter the printer's serial number into Ideamaker to make a connection?
What version of RaisePack and matching Ideamaker does this?

I use ideaMaker Ver. 3.1.0.1545 and latest RaisePack. As far back as I remember I have seen this setup window for adding a new connection to a printer: 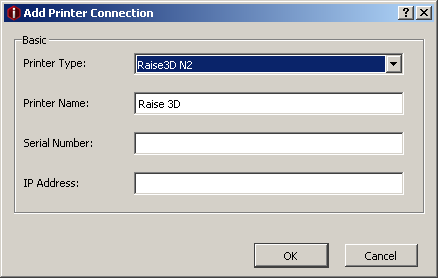 It might be so that if you have just used the scanning feature, then ideaMaker will find the serialnumber by itself (and maybe not present it to you). If however, you are connecting over the Internet, you will not be able to "scan". You need to enter parameters manually.

Like edited above, that's a bookmark- not a security feature. It will connect no matter what serial number is entered.

#1 this is completely impractical
#2 it's not secure
#3 it requires advanced network configuration and knowledge to have a chance in heck of connecting remotely on the typical network. you can make guides all day long, if a person has to ask, they likely do not have the required skills to make this work.

So again, what are we even talking about?

Or
Take a computer on the same network as the printer, install a decent properly secure remote desktop connection application, it has proper security and authentication, user remotes into to it, fires up ideamaker on it, and controls the printer.

Again, alternative- put an unsecured printer, a known protocol with no authentication, expose it through your firewall and pray nobody figures this out, meanwhile, in and of itself having issues connecting and routing across the internet in the first place to even reach the printer.
How is "this" the logical workaround we tell the user? Is it really worth more than a single post to say don't do it?

OK calm down now.
Everybody is free to do as he likes. I just wrote how I did it and feel comfortable with. If people find this difficult, then don't bother.

About security:
Your remote desktop setup isn't fully secure either. It is a far more common "specie" behind an IP address than a Raise3D printer, and as such also much more likely to be attacked. I guess 99.9 % of all evil hackers would not know about the existence of Raise3D printers, so the likelihood of a hacker focusing on hacking your printer is not real. Only if someone knows you have a Raise3D printer and know your public IP address, he can access it, and then only if you have not made the access restrictions.

Regarding the serial number, you are (partly) correct. I just tried it. You cannot just enter any number. It must have 11 digits and fulfill some other requirements I cannot figure out right away. It just need to look like real serial number I guess. It is true though that it is not specific to the printer you are connecting to, so it is not worth anything security wise.