The printer had a long run of successful PLA and TPU prints. But the first time I ran Nylon, the entire hot end blew out of the collar, and destroyed itself while badly gouging the build plate all the way through the build surface. I assumed I’d made some unwise setting in IdeaMaker - possibly regarding cooling. So I paid for a new hot end and build surface, waited for it to come, installed and recalibrated everything, adjusted some settings in the gcode output. Ran it. And… bam! The exact same thing happened again, as the pictures show. WTF?!

In both cases you can see the dislodged hot end will filament feeding out behind it, the gouges in the build plate, and the damaged nozzle. In the second case, it appears that the set screws that hold the heating rod and temp probe have somehow come out. (can’t figure that out at all). Yes, before you ask, I had tightened everything thoroughly, and had calibrated nozzle heights carefully.

B.) Is this likely some error on my part, or a fault in the printer mechanics?

C.) Should I be concerned about possible damage to the stepper motors, the belts and rollers, or any other mechanisms? 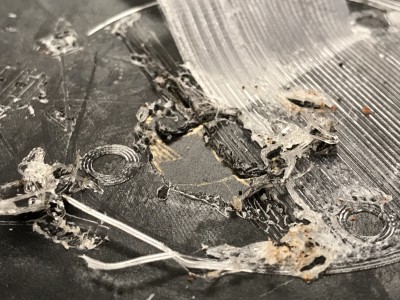 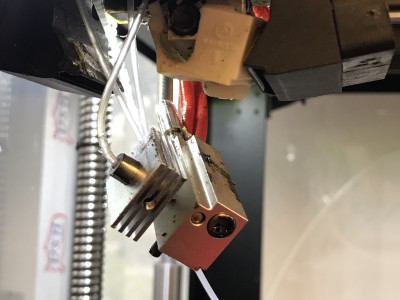 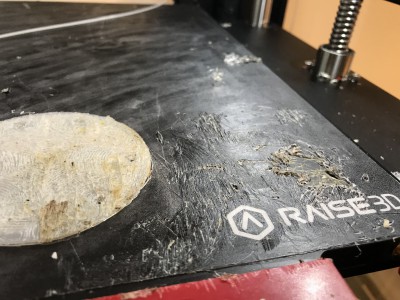 note the set screw hanging out

I’ve had the same thing happen to our Pro2 Plus. It’s a poor design, as there’s not a lot of area to clamp onto (especially if the right hot end needs to be lowered to match the left nozzle).
The set screws for the heater and thermocouple need to be hot tightened with the block above printing temp (like the nozzle).

Thanks for your reply! Very helpful. Indeed, the Left extruder is lowered a hair to bring the right extruder into adjustment range.
It never occurred to me to bring the heat up before setting set screws. Does that advice apply to the main collar as well?
I deduce from your comments that the reason this issue only started when I tried to print nylon is because the heads are hotter than for PLA and TPU.

The collars shouldn’t be affected since they’re above the cold side. Make sure your using the correct collar (there’s a one for the right side and one for the left). The small set screw should be on top. 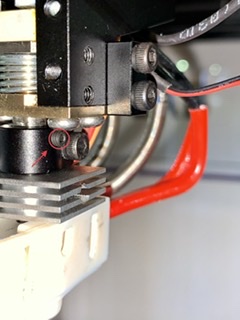