Thanks very much sir! I'll post pics when I complete the setup. Thanks again.

jetdillo wrote:Is this shipping yet ?
What sort of adaptations are you having to do ?
Thanks!

I got mine in March I think but am now going about installing it. I’ve had to redesign the suction head because the one they offer is for the dual extruder and I have a single. If you have a dual or dual converted to single you should be fine. It’s the built as single extruder ones that can’t be fitted with their suction head because they have a different, individually controlled (better) part cooling fan.

I have an N2+ Dual upgraded with Bondtech extruders, but with no lid. I generally get by with putting a box-fan in the window next to the printer and exhausting it to the outside. I occasionally print ABS and have done a little ASA, so the window fan takes care of most of the fumes, but I'd still like to get something more like a proper hood going. $175-200 seems a little steep though.

EL Cuajinais wrote:
It is a suction head that is installed close to the nozzle to suck and filter gases from 3D printing. The hose needs to go through the enclosure because the large roundish filter thing will not fit inside the printer. I used to have my N2 in a closet outside the house when I lived in Puerto Rico. Since I’ve moved to the states I don’t have an outside closet or a garage, so the N2 is in my bedroom, much to my wife’s chagrin. So I’m either printing with the windows up for ventilation, which can’t be done year round; Or printing PLA without too much regard for ventilation, but I really dislike printing in PLA. After I get this installed I will be more comfortable printing other materials in the bedroom year round. I will still limit myself to printing to only essentials, not printing for printing’s sake, but I will be much more comfortable that I’m not inhaling nearly as much crap.

I like that Idea. Alternatively, you should be able to attach a hose to the standard cover and just buy a adjustable computer fan and a separate HEPA filter and just filter it that way or do not filter it, just let it vent in you attic if you want..kinda like a chimney..

I've thought about this myself, but wonder if it would have the side-effect of cooling the temperature of the chamber too much from exhausting all the (hot) air around the bed.

This how the setup finally came out. I will do a couple more tweaks but now I am able to print using the suction head and filter. The pictures look straight if you click on them. Thanks again Ronvp! 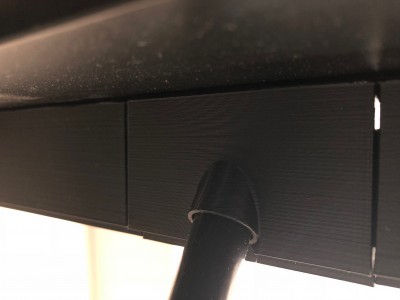 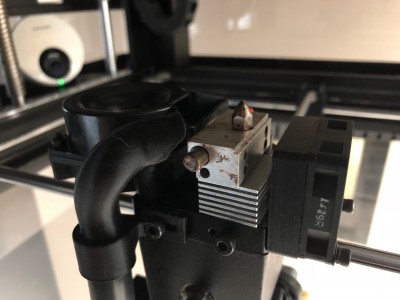 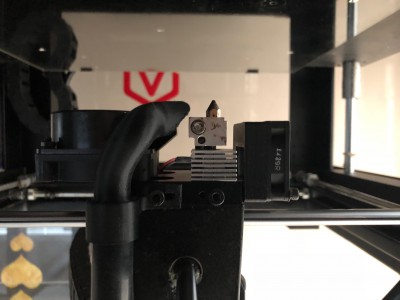 That looks good!, what type of hose are you using?? Do you have any concerns that the hose is causing issues with the motors having to push harder??

Ronvp wrote:That looks good!, what type of hose are you using?? Do you have any concerns that the hose is causing issues with the motors having to push harder??

I like how everything came out, your raiser was a godsend because I was burned out redesigning that suction head. Originally I had put it on the left side of the extruder and integrated with the extruder fan. Finally after many many many iterations; on the first use I realized it would not work because the suction head prevented the gantry from hitting the limit switches! Doh!

So I had to start from scratch and see where I could grab it on the right side. I used the M3 and M4 tapped holes that are originally intended for the second hotend which I’ve never had.

The hose is the one they include with the Zimple2. It is very flexible. That is an interesting thought about the motors pushing harder, it had not crossed my mind. I don’t think it can be an issue because I’m sure what little resistance it adds would not be more than the weight I saved by replacing the stock extruder the with Bondtech Mini.

Ronvp wrote:I finished printing the test piece and it printed nicely, but it does needs a lot of support structure. I am increasing the tolerances of the slider slightly to allow it to move a little more freely, I will post the files as soon as it is all correct.. here are some pics
closed.jpg
half open.jpg
open.jpg

I was wondering how the modified version with the ventilation slots has worked out for you and if all went well I would appreciate it if you wouldn't mind posting the revised .stl files?

This is working really well. I can now leave my hood on with PLA, just open the vents, not getting too hot. With ABS, I just close the vents.. I tried to see if I could regulate the temp during printing and you can see a 4 to 12 deg. C drop with vents open vs closed (depending on how many are open). Attached is a pic of my machine with the vented cover riser. Also a zip file with all 3mf files and also a idea file. The idea file is ready to print all of it in one batch. I note that depending on your printer settings, you may have to tweak the sliders after printing to make them move easily.

Thank you Ronvp. It looks great in your photo and I cannot wait to try this out on my own printer.

@Mike..your'e welcome.. As to the sliders, I printed them on their long side, so that the "grain" would line up with the other pieces, but you could try printing them laying down flat. printing these thin pieces straight up, causes some bulging in the corners and the vent holes, which have to be removed. I did put a small fillet in all these corners and with 0.1mm print height, the bulging should me very little.
Post Reply
51 posts