I've always wanted to add controllable cooling fans to my N2 and N2 Plus printers, but never got around to designing anything until today.
This is just the first pass, and I haven't made or tested anything yet - but I hope to have parts for this weekend. Have some clear eSun PC for the job.

All the quad fan upgrades I've seen create access issues for hot-end service. That's something I wanted to avoid. Also the factory duct is a pretty miserable design stalling the fan and generating a pretty pathetic flow of air over the hot end heat sink. That said, I've never had issues, so it must be adequate.

This design uses 40mm squirrel cage fans, two per side. I'm changing the direction of the air flow for the hot-end cooling. The fan exhausts up, and the fan inlet is drawing the air over the heat sink. I think this will move a lot more air through the fins than the OE setup.

For the print cooling the fan exhausts down and is ducted over to the nozzle.

If it works out, I'll share the files. If it needs improvement I'll share the progress. At this point the left and right sides are using the same housing. It screws into existing mounting holes using M3x8 flat heads. The fans will mount to the shrouds with M2x20 socket head screws. While probably not necessary, I have some aluminum spacers on order to go between the fan tabs and the shroud.

I'm also adding a BL-Touch, but won't be wiring that in for now. A Duet 2 board showed up in the mail today. That will be another project and that's when the BL-Touch is going to go into service (hopefully). I'll drill and tap a couple new holes to mount it. Keeps the bracket simple and sturdy. Not sure if the thermocouple wires are going to flex enough to let the sensor sit where i have it. 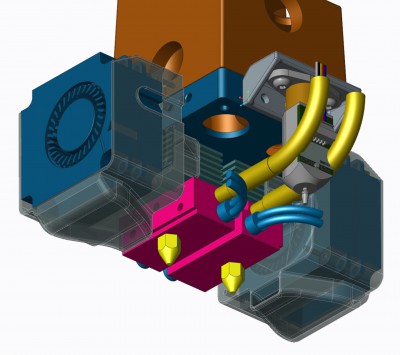 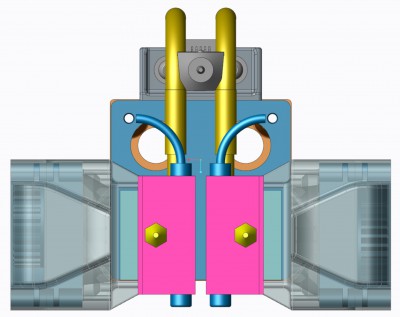 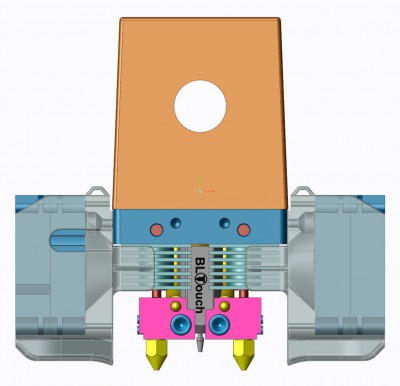 Re: Another Quad Fan Plan

Made a couple of minor design changes and the second set is printing now.

Should be able to put the machine together tonight or tomorrow and I have three multi-day prints to run right off the bat - so if I've created any issues I'll find out pretty soon.

Re: Another Quad Fan Plan

Machine is running with the new fan arrangement. The hot-end cooling appears to be a bit inferior to the factory setup. I may try to find a spot to place one more fan to feed cool air to the heat sinks - might just be pulling in hot air from the heat blocks. The air flow seems good. The print cooling fan seems to work well.

This setup interfered with the screws on the rod blocks for the x-axis. I had some flat-head screws that resolved that issue. When I find my 90 degree countersink I'll countersink the blocks.

It also contacted the connector Y-axis limit switch which I resolved by moving the connector - but my switch position was modded a couple years ago - so don't know if it will be better or worse on a stock machine. One more version of the parts printing now. If there's interest I can share the design once I think it's ready.

My MO is not generally to take an inadequate design and throw more stuff at it to solve the problem, but that's what I'm trying here. There is enough about this concept that I like, plus i have the fans. I think the issue with the hot end cooling is just that I'm drawing in the hot air rising up from the heat blocks - so I'm going to add a 5th centrifugal fan on the front of the print head ducted into the heat sinks. Hopefully this will feed enough cooler air into the heat sinks. The inner fans on the outside stacks are still drawing air from the heat sinks, and the outside fans are for part cooling. Hot ends are still accessible for service without moving anything.

New duct for the right side is on the printer now - White ePC. 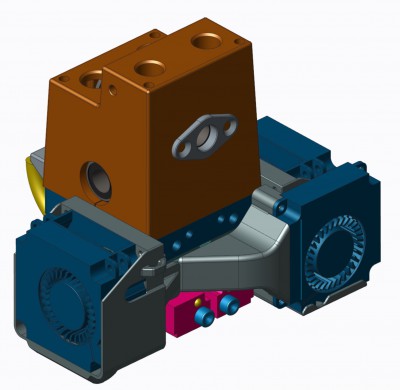 Interesting arrangement. If fan #5 is cooling the cold end heatsinks, do you still need the two inboard fans? What is the noise level like? I changed my 30mm cold end fans for 40mm Noctua fans to reduce the noise, but I'm guessing your 5up squirell cage design is loud.

tja wrote:Interesting arrangement. If fan #5 is cooling the cold end heatsinks, do you still need the two inboard fans? What is the noise level like? I changed my 30mm cold end fans for 40mm Noctua fans to reduce the noise, but I'm guessing your 5up squirrel cage design is loud.

Valid questions - I can't say for sure - and I've wondered the same. I figure they can't make anything worse, and should only make things better by ensuring the air is going into the heatsinks and not just blowing down the center. Should also help balance the air flow between the two cold ends, which might matter if I ever fire up the right extruder.

The little squirrel cages are pretty quiet compared to radial fans, and relative to the other fans in the printer I don't notice anything significant coming from the print head. My machines reside in the garage though, so noise is not an issue for me.

I have this design installed on both my N2 and N2+ now, and both machines are running. I just opened the door and stuck my head in. I can hear the fans on the print head, but they are quiet compared to the fan in the control board box.