When I have sliced a file. I always preview. And then I change my settings and preview again.
But the problem is that there is no easy way to get back to the slicing settings after the preview.

If I close the preview I get back to the Estimated print result window. And if I close that window I will get back to the main window. And have to start over. (Press I - select the template - press Edit (Edit is missing a keyboard short cut by the way.) - press Advanced - change settings - press OK - press Save and close - press Slice - press Preview. Phew!).

I really need a way to jump directly from Preview to Advanced settings for the currently chosen slicing template. A secret shortcut would be fine for me. But something a little more elegant maybe.

(I did notice just now when clicking around, that I have the option to press I at the top of the preview window, to get into the slicer settings. Honestly I haven't seen this for over a year. And the I-button isn't really UI-friendly either. It doesn't really advertise its function. But even If I press the I here it's a few steps in to change the settings. A fast way to change the slicer settings DURING preview would be nice. It could even reload the slice in realtime while you change the settings if the computer is up for it). 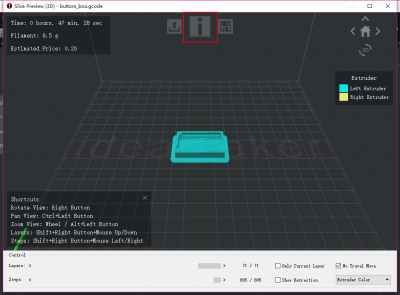 Hi Vicky,
I suspect a "misunderstanding" on Noren's resquest.

"once and for all" (if I may say this like that), the "goal" is like say Noren is : A fast way to change the slicer settings DURING preview would be nice. It could even reload the slice in realtime while you change the settings if the computer is up for it !

So (I see) a window showing the preview (with the actuals Control layers/steps Speed/structure/extruder current layer/no travel move/ Show retractation) AND a option for zoom centered on mouse and screen and... a window showing the parameters (sure, very nice, if one crt for each !!!) color (with real speed in color box) and parameters for each member of structure.
with a option for reload on any change or with a reload button.

Really the best slicer no ?

Sorry for my negligence. We are trying to optimize the workflow of slicing which should can improve some using experience of editing printing settings.

Youre'welcome !
(I apologize for my bad English)
I am very happy with what you have done and I am convinced that it will be even better tomorrow: once and for all! I'm staying with Ideamaker

And I'm not clear too when I mention "Reals speeds" I mean an analysis of the speed in terms of segments in a layer that would give the speed min / average and max (acc / cruise (if exists) and deceleration ...
For now if I mention a speed of 250 mm / s for all phases: the table gives me the same nice red color for everything but the real speed will be much lower.

Of course all these are only "way of seeing things" and it is the grouping of all that will give something well adapted.
You must also keep old things that are suitable for beginners but also offer the appropriate screens for specialists.
Thanks for your work.

There has no acceleration settings inside Gcode, they are in motion board firmware. So in ideaMaker, it won't show the acceleration and deceleration.

Vicky@Raise3D wrote:There has no acceleration settings inside Gcode, they are in motion board firmware. So in ideaMaker, it won't show the acceleration and deceleration.

Excuse me, I may have misunderstood because I believe that the acceleration settings are in the user's data put in IDEAMAKER.
And that it is the formulas and calculations using the parameters which are carried out in the motion controller.

And that there is no reason not to be able to display the result by an identical prior calculation in IDEAMAKER or other software...

I think that the current indication in the preview screen option "SPEED" (Extruder color / Structure / speed) is not very useful for optimizing models and profiles.

Which would not be the case if a more realistic valueS was indicated BEFORE ... to see it (result of) when printing.

But this is only my opinion and a minor detail versus the great improvement that would be the fact of being able to immediately see the effect of a modification of a parameter such as (by example) the number of walls.

ps: Normally the CPU with which the STLs are produced does not usually lack power. Especially when they software like SOLIDWORKS or Rhino6 are used ...

The calculation and formula are not always fixed, but will change according the condition of hardware and using environment.

So, there is still some work to no longer have parameters out of control of the user...
And, if no one can do it ... you're right not to worry.

I really felt like we were wasting our time there

Vicky@Raise3D wrote:The calculation and formula are not always fixed, but will change according the condition of hardware and using environment.

And what I understood of this answer like : This is planned for our next version and not for your actual machine !

Vicky@Raise3D wrote:with the help of a more advanced acceleration control, the printer can run at much faster moving speed and volume speed.
We previous limited the outline speed in the profile of N series to be 25mm/s to balance between the printing speed and quality. Now, even the printing profiles of Pro2 series are still under tuning, the result is so far much better than before.

All things must pass ...

The new series will use different hardware and firmware compared with the current N series, so that it can reach to higher speed and keep stable working.
But for acceleration, the calculation is still in firmware during printing but not slicing software before printing.

Yes, the new series does not improve IDEAMAKER ...now, of course
We agree. 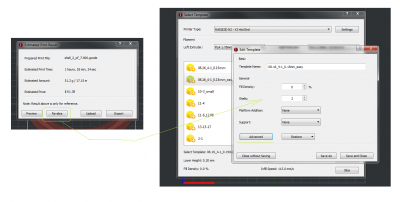 As requested in this post, change settings after preview, the re-slice button is current version in preview page is as below: 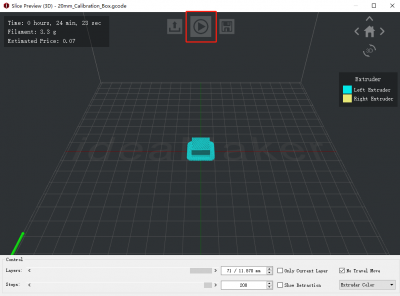