Why is it that in most cases, models imported or added to Ideamaker, are invalid and need to be repaired?

Secondly, what is the repair done?

Thirdly, sometimes it takes multiple repairs before it's finally ok for slicing, why?

Sometimes the repair does not work as an stl but only as obj, why?

Pretty simple- your CAD programs are not following design rule checks for 3D printing. In the simplest terms most failures are that the walls of the object are not joined and internal conflicting geometry is not removed before exporting the STL file. As such, Ideamaker is enforcing strict rules and checks for non-manifold walls and badly formed geometry. Your STL really does have errors and yes, many out there do too.

Why can't it fix it? Well again, you put junk in you get junk out. When you open a poorly formed STL file that is not really manifold, not properly joined walls, just very closely placed objects, you the user are leaving room for interpretation. The entire point of CAD is a numeric and perfect representation of what exactly you want to build. However, many programs and many users are NOT taking the time to properly Boolean join walls and object, properly clean up this internal geometry and hoping and praying the slicer can "figure out what they meant". Again, that's just poor workmanship on the part of the user if this is supposed to be precise and follow rules- and then they wonder why their file is reporting errors. Some slicers are faking the funk here and interpreting the STL file and auto joining very close objects. The issue is- what did the USER/DESIGNER intend? Maybe on a shaft or gears- it's supposed to be 2 separate parts for a reason. Maybe it's a special joint or other feature. Bad interpretation is to assume all close object should be joined.

So back to why does it take multiple passes for repair? Each pass joins or removes some of these internal errors. Example is wall tolerance, what is probably should be joined together- what distance is probably not joined together?? So one pass joins some walls and objects that pass the repair rule to join them even though the STL did not have them joined. Running a second pass, now the model is analyzed again and because there were changes- now the repair rules see different things and may repair more- or again, could interpret wrong and join or remove things NOT intended to be removed. You are at the mercy of the open interpretation failure you left when exporting the CAD STL in the first place (STL never actually represented what you really wanted) and you are just bouncing around between the rules here.

Why and OBJ VS an STL? different file formats can express in greater detail geometry and relationships. What may not pass in an STL might be better represented in the OBJ. Remember, your CAD program (or somebody else's) at the time of export to create the file determined some resolution details. Sloppy work at export is the basic failure here.

Concepts and details are much better explained in tutorials VS a forum posting.
https://www.shapeways.com/tutorials/fix ... old-models

Some stuff I have never seen written up but relevant to the discussion:
Why does this matter (manifold, face direction, internal geometry)?
The answer is simple. An STL is a 3D cloud of points or coordinates that are joined together to make walls and shapes. Slicing for 3D printing is reading this STL "wireframe" concept at layer heights as if put and cut on an automatic meat slicer. Then those 2D layers of point are anaylized to figure out how to take a nozzle of a known width and "color between the outlines". Right there is the first clue. How do you know the difference between the INSIDE and the OUTSIDE of a layer or shape? Hint- the wall facing direction is a detail about how the point coordinates are joined (those key relationships that are failing). Again, a wall is a series of points and how they are logically connected together. When you slice a layer- now we have a limited subset of information making those relationships all that much more critical. Then how does the slicer determine where infill goes? This goes back to manifold water tight STL file means that all the lines or walls on that layer are joined so it's a closed polygon shape. This means that via rules, you can see infill is the space between the outfacing walls. Again, if there is a gap= NO INFILL because the rule cannot define inside VS outside (non-mnifold). Same with hidden internal =geometry and overlapping geometry. How do you define infill? This is why Ideamaker throws those warnings, it's saying there is a chance in the STL for something to be interpreted multiple ways and it is warning you it's guessing what is the right way. Maybe it's right, maybe it's wrong, but at least it's telling you.

Also, under preferences in Ideamaker, you can somewhat affect this error threshold and automatic joining of vertices. It's not under File, it's under "Edit" from the top menu, then "Preferences", and then the tab for "Files" 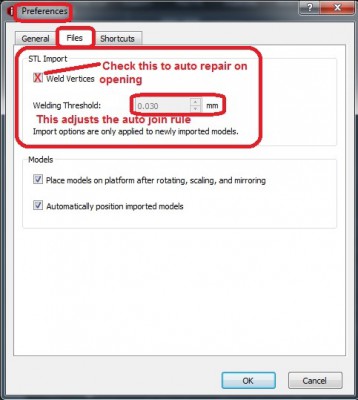 Also here, but the picture is what matters https://www.shapeways.com/tutorials/pre ... d_printing
Here you have 2 intersecting cubes. What this is not showing is a layer slice view but the concept is the same, 2 overlapping squares leaves a rectangle in the middle that is the massive unknown land. At a layer level, the basic rules for infill are broken because the leftover "hidden" geometry still exists. Should the shell follow that geometry? Which side is infill (center rectangle, 2 outer rectangles, or all 3)? 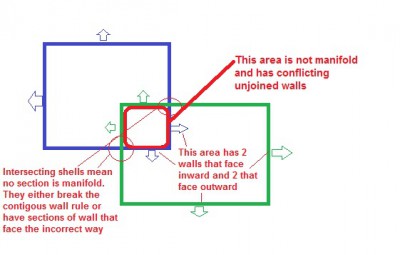 Again, what they do in the second image is remove the hidden and conflicting internal geometry to make all walls contiguous and facing out thus making the entire center space "infill". 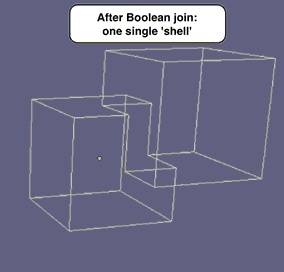 Very Much appreciated, thanks for taking the time to detail the explanation. Understood, well done Jetguy!

Here you can find the useful information regarding the 3D printing: 3dinsider.com/3d-printing-guide/
Post Reply
7 posts • Page 1 of 1